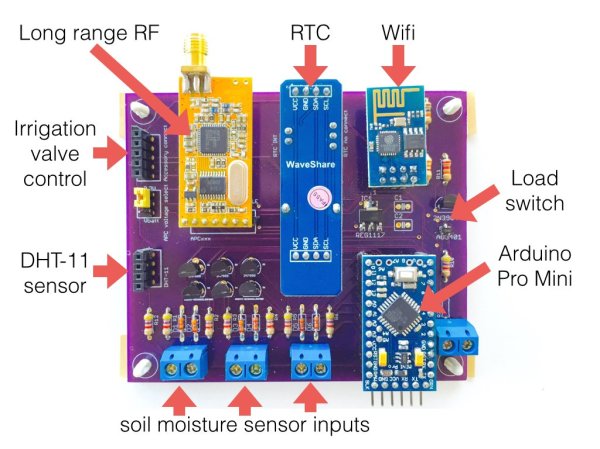 [Reinier van der Lee] owns a vineyard in southern California – a state that is in a bit of a water crisis. [Reinier van der Lee] also owns an arduino and a soldering iron. He put together a project the reduces his water usage by 25%, and has moved it to open source land. It’s called the Vinduino.

Its operation is straight forward. You put a water sensor in the dirt. You turn on the water. When the water hits the sensor, you turn the water off. This was not, however, the most efficient method. The problem is by the time the sensor goes off, the soil is saturated to the point that the plant cannot take it all up, and water is wasted.

The problem was solved by using three sensors. The lowest most sensor is placed below the roots. So it should never go off. If it does, the plant is not taking in all the water, and you can reduce the output. The two sensors above it monitor the water as it transitions through the soil, so it knows when to decrease the water amount and watering cycle times.

Be sure to check out the project details. All code and build files are available on his github under the GNU General Public License 3.0 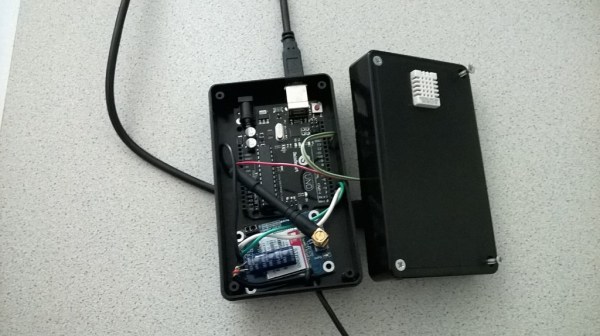 [Richard Deininger] built the project after having the AC system go down in his company’s server room. That environmental cooling is imperative if you don’t want your server hardware turned to slag. The idea is a separate piece of hardware that monitors the room temperature and will alert the on-call staff if it climbs too high. He was successful, and showing the hacked hardware around the office came up with a second idea: a temperature sensor for your car to ensure it’s not too hot for your dog.

Anyone who has a canine friend living with them knows you don’t utter the word “ride” out loud lest a barking, whimpering, whining frenzy ensue. But jingle those keys and they’ll be at the door in no time. During the summer you can still take them with you for short errands thanks to the peace of mind [Richard’s] build provides. It’s simply an Arduino, DHT22 temp/humidity probe, and a SIM900 GSM modem. Set your temperature threshold and you’ll get an alert if temperatures are climbing to unsafe levels for Fido.

While you have your tools out, we recommend building auto-watering and auto-feeding systems for the family pets. What’s that? You hate domesticated animals? There’s a hack you can use to chase them from your yard. 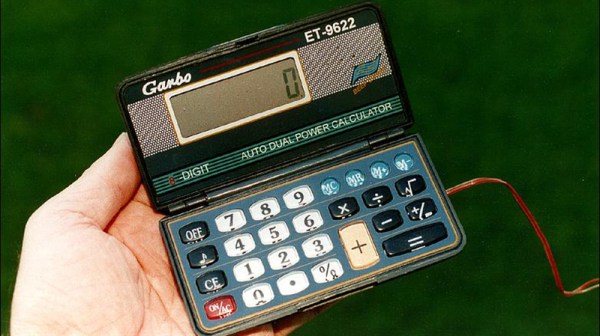 In vehicle racing, a properly tuned suspension is essential for making good time around the track. Weekend Race Warrior [Julian], thought that his right rear suspension might be bottoming out when making hard left turns. After thinking about it for a while, he came up with a super simple way to measure how many times his suspension bottoms out during a lap: a digital counter made from a calculator.

[Julian] opened up his calculator and soldered a pair of wires across the = button terminals. After a hole was drilled in the case for the wires to exit, the calculator was put back together. To count how often his suspension bottomed out, a normally open limit switch was installed on the car at a point where it would be triggered when the suspension bottomed out. The 2 added wires coming out of the modified calculator connect to that switch. Switch presses now emulate a = button press. Before starting a lap, 1+1= is pressed to display 2. At the end of the lap, if the suspension bottomed out, the switch would be triggered and the displayed value would increase. Remember to subtract 2 from that value to get the total number of events that occurred.

A mechanical switch makes this a great application for counting when things move a certain way but there are some more options. Connecting the switch-side of a relay to the calculator allows [Julian] to count brake presses (via the break light signals) or count how often his boost pressure goes over a certain amount (using a pressure switch). 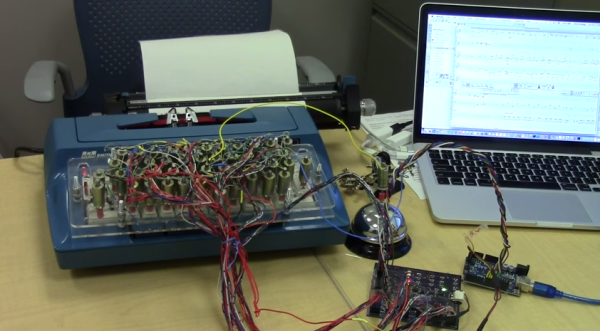 [Chris Gregg] had a dream. He wanted to convert use a typewriter as a printer. Sure this has been done before, but [Chris] wanted to create his own version. He picked up a 60’s era Smith Corona electric typewriter, with the hopes of driving its key switches with a computer. You can imagine his surprise when he discovered the keys were not electric switches at all, but a complex mechanical system which triggered a clutch to strike the actual paper. Realizing this was not going to be a simple wiring job, [Chris] set the project aside, where it remained for several years.

A conversation with [Bruce Molay], a coworker at Tufts University reignited [Chris’] interest in project. [Bruce] suggested using solenoids to press the keys. [Chris] dove in, and quickly had 48 solenoids on hand. The first problem was mounting the solenoids on the keys. [Chris’] roommate happens to be [Derek Seabury], president of Artisan’s Asylum Hackerspace. [Derek] created an acrylic frame which holds the solenoids and fits directly over the typewriter’s keyboard. This meant that no modifications needed to be made to the typewriter itself. Simply lift off the solenoid array and you’re ready to rock like it’s 1965.

The next step was driving all those solenoids. For that, Chris worked with [Kate Wasynczuk], one of his students at Tufts. [Chris] designed a board using Texas Instruments  TPIC6A595 shift registers. The TIPC “power logic” series work like regular 74 series logic, but have seriously beefy outputs. These chips can handle up to 50 volts and 1.5 amps pulsed output current – plenty for [Chris’] 24 volt solenoids. [Chris] taught himself schematic entry and PCB layout in Eagle. After only two tries, he had a working board from OSHPark.

An Arduino Uno converts serial over USB output to a bit stream ready to clock into the shift registers. On the computer side, [Chris] wrote up a basic CUPS driver which allows him to print from his Macbook. The perfect demo for this project turned out to be musical. Click past the break to see The Smith Corona perform “The Typewriter Symphony”, by Leroy Anderson. This may be the first time this particular piece of music has been performed with actual words being typed, rather than random keys.

END_OF_DOCUMENT_TOKEN_TO_BE_REPLACED 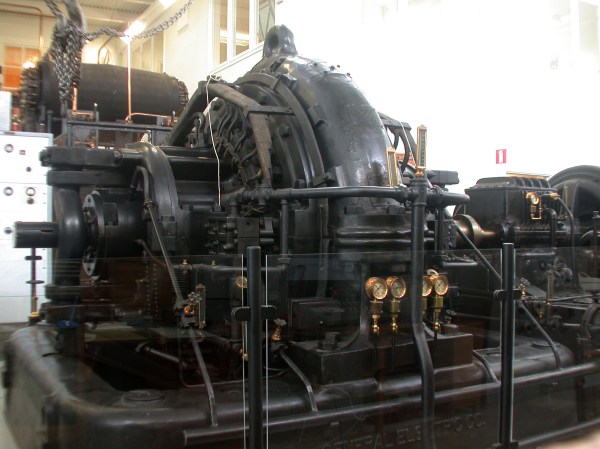 Is your ham radio rig made of iron and steel? Is it mechanically driven? Classified as a World Heritage Site? We didn’t think so. But if you’d like to tune in one that is, or if you’re just a ham radio geek in need of a bizarre challenge, don’t miss Alexanderson Day 2015 tomorrow, Sunday, June 28th

The Alexanderson Transmitter design dates back to around 1910, before any of the newfangled tube technology had been invented. Weighing in at around 50 tons, the monster powering the Varberg Radio Station is essentially a high-speed alternator — a generator that puts out 17.2 kHz instead of the 50-60 Hz  that the electric companies give us today.

Most of the challenge in receiving the Alexanderson transmitter broadcasts are due to this very low broadcast frequency; your antenna is not long enough. If you’re in Europe, it’s a lot easier because the station, SAQ, is located in Sweden. But given that the original purpose of these behemoths was transcontinental Morse code transmission, it only seems sporting to try to pick it up in the USA. East Coasters are well situated to give it a shot.

And of course, there’s an app for that. The original SAQrx VLF Receiver and the extended version both use your computer’s sound card and FFTs to extract the probably weak signal from the noise.

We scouted around the net for an antenna design and didn’t come up with anything more concrete than “few hundred turns of wire in a coil” plugged into the mic input.  If anyone has an optimized antenna design for this frequency, post up in the comments?

Thanks [Martin] for the tip! 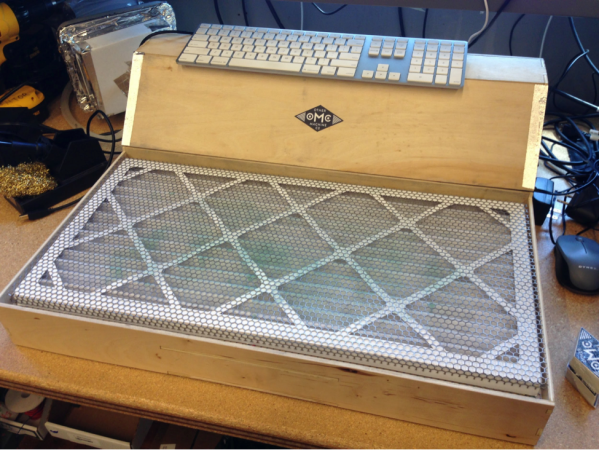 When you’re soldering, smoke rises from your iron. That smoke is full of a variety of chemicals, depending on what type of solder you’re using, but it’s almost certainly not good for you. That’s why you can buy fume extractors to suck smoke away.

But benchtop extractors tend to suck, and not in the way they’re supposed to. It can be hard to get the extractor to pick up all the fumes, leaving fumes that float into your face.

Over at Other Machine Co., they built up a custom downdraft fume extractor to solve this problem. The downdraft extractor is a table that you work on, providing downwards suction that grabs the fumes. Their table uses a standard MERV13 air filter that’s rated to trap particles as small as 1.0–0.3 μm. Cooling fans provide the airflow, and a piece of perforated sheet metal acts as a work surface.

The table works great for soldering, and is also helpful for working with other chemicals like adhesives and solvents. DXF files for the frame parts are provided, and everything else can be sourced from McMaster.

For many of us, interacting with computers may be as glorious as punching keys and smearing touch screens with sweaty fingers and really bad posture. While functional, it’s worth reimagining a world where our conversation with technology is far more intuitive, ergonomic, and engaging. Enter TEI, an annual conference devoted to human-computer interaction and a landmark for novel projects that reinvent the conventional ways we engage our computers. TEI isn’t just another sit-down conference to soak in a wealth of paper talks. It’s an interactive weekend that combines these talks with a host of workshops provided by the speakers themselves.

Last year’s TEI brought us projects like SPATA, digital calipers that sped up our CAD modeling by eliminating the need for a third hand, and TorqueScreen, a force-feedback mechanism for tablets and other handhelds.

Next February’s conference is no exception for new ways to interact with novel technology. To get a sense of what’s to come, here’s a quick peek into the past from last year’s projects: