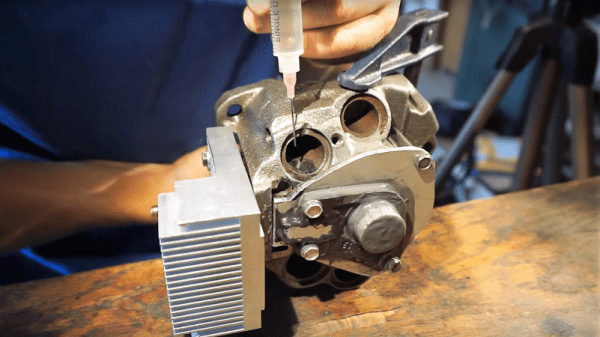 We like this one because it has a real Junkyard Wars feel to it: turning a cast-off fridge compressor into a two-stroke internal combustion engine. [Makerj101] is doing this with tooling no more complicated than a hacksaw and a hand drill. And JB Weld — lots and lots of JB Weld.

[Makerj101]’s video series takes us through his entire conversion process. Despite the outward similarity between compressors and engines, there are enough crucial differences to make the conversion challenging. A scheme for controlling intake and exhaust had to be implemented, the crankcase needed to be sealed, and a cylinder head with a spark plug needed to be fabricated. All of these steps would have been trivial in a machine shop with mill and lathe, but [Makerj101] chose the hard way. An old CPU heat sink serves as a cylinder head, copper wire forms a head gasket and spacer to decrease the compression ratio, and the old motor rotor serves as a flywheel. JB Weld is slathered everywhere, and to good effect as the test run in the video below shows.

Think you recognize [Makerj101]? You probably do, since we featured his previous machine shop-less engine build. This guy sure gets his money’s worth out of a tube of JB Weld.

END_OF_DOCUMENT_TOKEN_TO_BE_REPLACED

We’ve got a question for you:  If you were stuck in a basement, with nothing too much more than some copper pipe, solder, JB-Weld, and a few hand tools, do you think you could make a working 2-stroke motor? Well, [Makerj101] did just that, and the results are fan-freaking-tastic.

[Makerj101] began his journey like most of us do – with a full face-plant type failure. His first attempted at building an internal combustion engine wouldn’t run, due to a low compression ratio, and too small port sizes. So he did what most of us would do, and tore apart a small gas-power weed-whacker motor to see what he was doing wrong.

The type of engine he’s making is a 2-stroke. That makes the design much simpler as there are no mechanically controlled valves a like 4-stroke motor. The piston (along with the cylinder wall) does double duty by also directing the intake and exhaust gasses – along with a simple flap-type check valve.

For now, the ignition system is run off of mains power, but he has plans to change that – creating a self contained engine. We’re amazed that the entire build is made with such simple tools. Even the the piston is cast out of “JB Weld” epoxy putty. After seeing this, we think that the kid who took apart a clock is going to have to up his game a bit.

We’ve included all 6 parts after the break.

END_OF_DOCUMENT_TOKEN_TO_BE_REPLACED 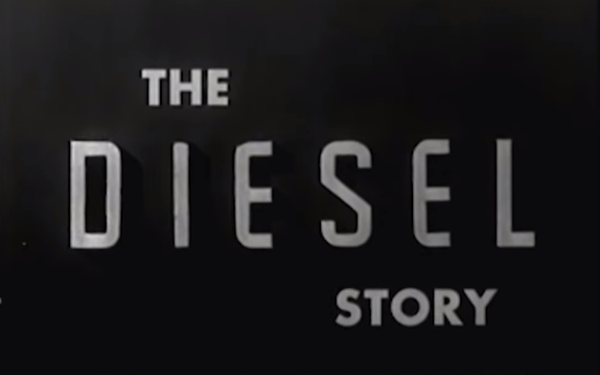