Soundbars are a rather strange category of speaker, most typically used with televisions to add some punch that the drivers crammed into a flatscreen TV simply can’t match. [Matt] of DIY Perks wanted a soundbar that was better suited to use on a computer desk rather than in a loungeroom, and set about creating one.

Regular soundbars aren’t great for a computer desk as they tend to deliver sound directed at one’s chest rather than one’s ears. [Matt]’s design instead angles its speakers slightly upwards, aimed at the user’s head as it should be. The build uses reclaimed wooden flooring for a cheap source of pretty wood that isn’t as ugly or flaky as MDF.

The design acts as a monitor stand and keyboard hutch, raising the screen to a comfortable height for viewing. The speakers themselves are in acoustic enclosures mounted on either side, also helping to provide good stereo separation. A subwoofer is also built into the shelf to add some bass response, with an impressively-neat bass chamber design. Finished off with some LED lights and a USB hub, the design delivers great sound along with a lovely desk environment for getting work done.

[Matt] does love a nice DIY build; his water-cooled outdoor TV is a particular delight. Video after the break.

END_OF_DOCUMENT_TOKEN_TO_BE_REPLACED 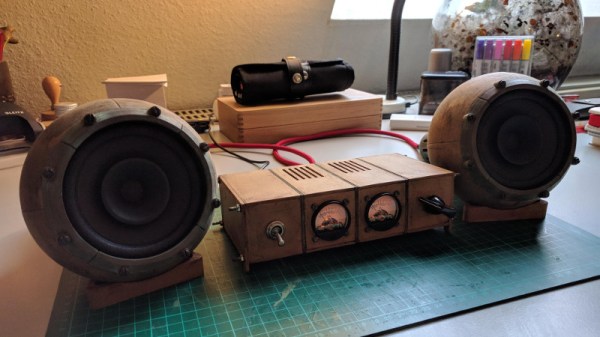 On the off chance you’re reading these words on an actual desktop computer (rather than a phone, tablet, smart mirror, game console…), stop and look at the speakers you have on either side of your monitor. Are you back now? OK, now look at the PC speakers and amplifier [Kris Slyka] recently built and realize you’ve been bested. Don’t feel bad, she’s got us beat as well. 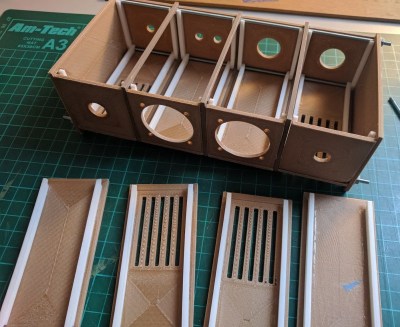 The speaker and amplifier enclosures were painstakingly printed and assembled over the course of three months, and each piece was designed to be small enough to fit onto the roughly 4 in x 4 in bed of her PrintrBot Play. While limited print volume made the design considerably trickier, it did force [Kris] to adopt a modular design approach with arguably made assembly (and potential future repairs or improvements) easier.

The amplifier is made up of rectangular “cells” which are connected to each other via 3 mm threaded rods. For now the amplifier only has 4 cells, but this could easily be expanded in the future without having to design and print a whole new case. Internally the amplifier is using two TDA8932 digital amplifier modules, and some VU meters scored off of eBay. 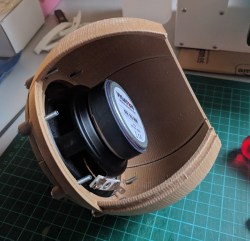 Each speaker enclosure is made up of 10 individual printed parts that are then glued and screwed together to make the final shape, which [Kris] mentions was inspired by an audio installation at the Los Angeles County Museum of Art. They house 4″ Visaton FR 10 HM drivers, and are stuffed with insulation.

It’s a bit difficult to nail down the style that [Kris] has gone for here. You see the chunky controls and analog VU meters and want to call it retro, but it’s also a brass cog and sprocket away from being Steampunk. On the other hand, the shape of the speakers combined with the bamboo-filled PLA used to print them almost gives it an organic look: as if there’s a tree somewhere that grows these things. That’s actually a kind of terrifying thought, but you get the idea.

If your computer speakers were assembled by mere mortals, never fear. We’ve covered a number of interesting hacks and mods for more run-of-the-mill desktop audio setups which should hold you over until it’s time to harvest the speaker trees.

We can commiserate with [HardwareCoder] who would rather not leave his PC speakers on all the time. The Creative T20 set that he uses turn off when you turn the volume knob all the way down until it clicks. So shutting them off means repositioning the volume each time they’re switched on again. This hack kills two birds with one stone by turning on and off automatically without touching that knob.

The system is based around an ATtiny45 and a few other simple components. It uses two ADCs to monitor the rear input channels of the PC speakers. If no sound is detected for more than one minute, the shutdown pin of the speakers’ amp chip is triggered. That’s not quite where the hack ends. We mentioned it monitors the rear input of the speakers, but it doesn’t monitor the front AUX input. An additional push button is used to disable the auto-sleep when using this front input. There is also a fancy PWM-based heartbeat on an LED when the speakers are sleeping.

[HardwareCoder] was worried that we wouldn’t be interested in this since it’s quite similar to a hack we ran a few years ago. We hope you’ll agree it’s worth another look. He also warned us that the demo video was boring. We watched it all anyway and can confirm that there’s not much action there but we embedded it below anyway.

END_OF_DOCUMENT_TOKEN_TO_BE_REPLACED [Andrzej’s] plain old computer speakers are ordinary no more. He pulled off a fairly complicated hack which now lets him control speakers via Bluetooth.

He had a set of Creative brand computer speakers with a volume potentiometer that needed replacing. He was having trouble finding a drop-in replacement part and decided he would just go with a rotary encoder. Obviously you can’t just drop one of those in, he would need a microcontroller to monitor the encoder and translate the change into the appropriate resistance. He figured if he was going this far he might as well make the most out of the uC.

Above you can see all the stuff he crammed into the original case. The rotary encoder is seen on the lower left. An ATmega8 is on a PCB he made himself. The white part to the left is a digital potentiometer which feeds the resistance to the original speaker PCB. On the left is the Bluetooth module which lets him control everything from his phone. You can see a demo of that after the break.

END_OF_DOCUMENT_TOKEN_TO_BE_REPLACED [Michael Chen] liked the sound he was getting out of these Corsair SP2200 computer speakers, with one big exception. They were giving off some unpleasant crackling sounds. He figured this might be as easy as replacing a faulty potentiometer, but soon found out the fix was going to be more complicated than that. All said and done he ended up reworking the design of the speakers’ amplifier board.

The hardest part was identifying the problem. Once he had cracked open the case he found the volume potentiometer was working correctly by testing it with a multimeter. Next he inspected the board for bad solder joints but didn’t really find any. The breakthrough came when he realized that the crackling was also happening when he used headphones. With that discovery he started making a few more observations and realized that the crackling didn’t happen when the volume knob was all the way up or all the way down. There was an impedance issue between that potentiometer and the amplifier circuit. He rerouted the signal flow on the board to use the headphone amp as a filter and it fixed the problem. Fittingly, he’s entered this project into the Instructables Fix & Improve contest.