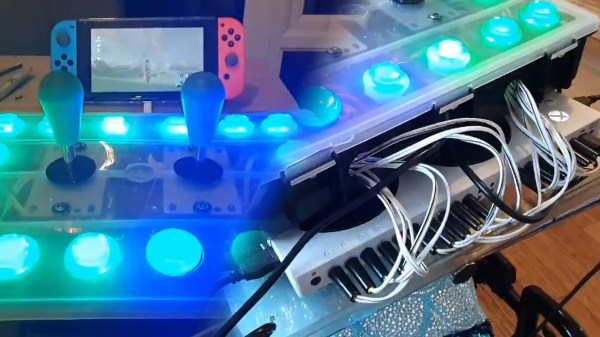 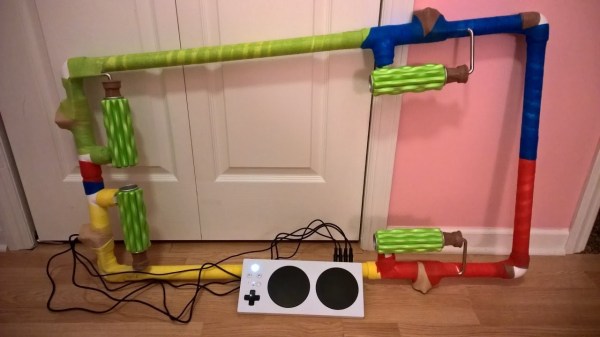 When Microsoft announced the Xbox adaptive controller earlier this year, many were pleasantly surprised at how adaptive it truly was. The controller features 3.5mm jacks for easily connecting any external input device and sports an impressive build quality given its price tag, but the most impressive part was the fact that the design was so open in nature. Rather than seeking to create a specific design solution tailored to a subset of users the adaptive controller acts more as a hub for the community’s designs. One of those brilliant designs comes from [Colton] who posted a five-part series on his custom controller build for his daughter.

His daughter, Ellie, has Cornelia de Lange syndrome which prevents her from being able to use more conventional pressure sensitive input devices. So [Colton] devised a way for buttons to be pressed using an alternate range of motion. By attaching foam massage inserts to standard paint rollers, the buttons could be triggered by allowing the peaks and valleys of the foam to roll over the top of each button. He could achieve even better accuracy by attaching braided ribbon over the buttons in order to prevent binding.

After finding that setup to be successful, [Colton] went about designing a frame. He arrived at using PVC pipe and utilizing tees as anchor points for the rollers. A couple of steel hose clamps are enough to hold each of the foam rollers in place, and the contact distance can be dialed in with buttons housed in threaded PVC adapters (shown right). After the addition of a little colored wrap here and there the build has a decidedly cheery exterior.

However, the build was not complete without a custom piece of software to match. [Colton] reached out for help from his nephew to program a “RGB Etch-a-Sketch” they called Sundoodler. The game runs on a small form factor PC hooked up to a projector so Ellie can play lying down. [Colton] has some future plans for his daughter’s custom Xbox adaptive controller build, but for now you can see the results in the video below.

END_OF_DOCUMENT_TOKEN_TO_BE_REPLACED

[Ben Heck] posted an interesting one-off project he built many months ago. Video game developer Infinity Ward approached him to build a large display that indicated what buttons on a controller were being pressed. They were planning on using it during player testing by recording the board and the monitor at the same time. They could then compare the two to see if there was any disconnect between the players input and the onscreen action. Infinity Ward is the developer behind games like Call of Duty 4.

[Ben] piggy-backed the switch connections and added an external port. He used a pair of octal buffer ICs to replicate the signals and activate the LEDs. The whole board is powered by the same 3.3V line that’s used by accessories like the chat pad. The triggers have three LEDs each and are lit using a resistor ladder. [Ben] comments that since this is a newer Xbox 360 controller, the active-low button scheme makes it fairly easy to work with. There is a video of the board embedded below. END_OF_DOCUMENT_TOKEN_TO_BE_REPLACED

You are probably familiar with the work of [Ben Heckendorn]. His latest commercial project, the one handed Access Controller, is now available for pre-order. A well known modder, he has created several unique video game console adaptations including a scratch built one handed Xbox 360 controller.

A unique feature of this controller is that it allows you to change the location of the buttons/joysticks. This modular design can be swapped and customized depending on your needs. Ben is including a guide for creating your own modules, should you be so inclined. The device uses 2.4Ghz wireless to communicate and is available for $129.99.

Since we know you are more interested in hacks than gadgets, be sure to checkout Heckendorn’s nice collection of how-tos on Engadget.