It’s probably one of the first lessons learned by new drivers: if you see a big, red fire truck parked by the side of the road, don’t run into it. Such a lesson appears not to have been in the Tesla Autopilot’s driver education curriculum, though – a Tesla Model S managed to ram into the rear of a fire truck parked at the scene of an accident on a southern California freeway. Crash analysis reveals that the Tesla was on Autopilot and following another vehicle; the driver of the lead vehicle noticed the obstruction and changed lanes. Apparently the Tesla reacted to that by speeding up, but failed to notice the stationary fire truck. One would think that the person driving the car would have stepped in to control the vehicle, but alas. Aside from beating up on Tesla, whose AutoPilot feature seems intent on keeping the market for batteries from junked vehicles fully stocked, this just points out how far engineers have to go before self-driving vehicles are as safe as even the worst human drivers.

The tech press is abuzz today with stories about potential union-busting at Kickstarter. Back in March, Kickstarter employees announced their intent to organize under the Office and Professional Employees International Union (OPEIU). On Thursday, two of the union organizers were fired. Clarissa Redwine, who recently hosted a Hack Chat, was one of those released; both she and Taylor Moore are protesting their terminations as an illegal attempt to intimidate Kickstarter employees and keep them from voting for the union. For their part, Kickstarter management says that both employees and two more were released as a result of documented performance issues during the normal review cycle, and that fourteen employees who are in favor of the union were given raises during this cycle, with three of them having been promoted. There will no doubt be plenty more news about this to come.

Would you pay $900 for a Nixie clock? We wouldn’t, but if you choose to buy into Millclock’s high-end timepiece, it may help soften the blow if you think about it being an investment in the future of Nixie tubes. You see, Millclock isn’t just putting together an overpriced clock that uses surplus Russian Nixies – they’re actually making brand new tubes. Techmoan recently reviewed the new clock and learned that the ZIN18 tubes are not coming from Czech Republic-based Dalibor Farný, but rather are being manufactured in-house. That’s exciting news for Nixie builders everywhere; while Dalibor’s tubes are high-quality products, it can’t hurt to have a little competition in the market. Nixies as a growth industry in 2019 – who’da thunk it?

We ran across an interesting project on Hackaday.io the other day, one that qualifies as a true hack. How much house can you afford? A simple question, but the answer can be very difficult to arrive at with the certainty needed to sign papers that put you on the hook for the next 30 years. Mike Ferarra and his son decided to answer this question – in a circuit simulator? As it turns out, circuit simulators are great at solving the kinds of non-linear simultaneous equations needed to factor in principle, interest, insurance, taxes, wages, and a host of other inflows and outflows. Current sources represent money in, current sinks money paid out. Whatever is left is what you can afford. Is this how Kirchoff bought his house?

And finally, is your parts inventory a bit of a mystery? Nikhil Dabas decided that rather than trying to remember what he had and risk duplicating orders, he’d build an application to do it for him. Called WhatDidIBuy, it does exactly what you’d think; it scrapes the order history pages of sites like Adafruit, Digi-Key, and Mouser and compiles a list of your orders as CSV files. It’s only semi-automated, leaving the login process to the user, but something like this could save a ton of time. And it’s modular, so adding support for new suppliers is a simple as writing a new scraper. Forgot what you ordered from McMaster, eBay, or even Amazon? Now there’s an app for that. 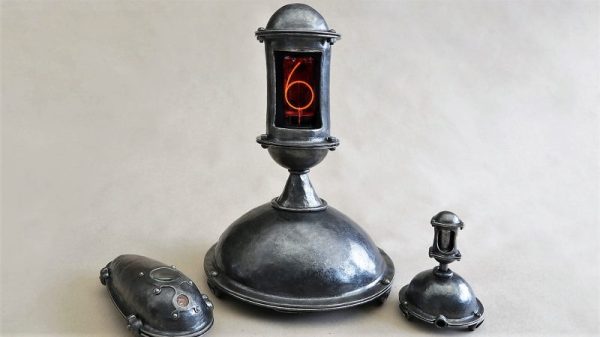 Both “Nixie” and “Steampunk” are getting a bit overused. It’s hard to count the number of clock projects we’ve seen recently that combine the two, and normally we’d be loath to feature yet another variation on that theme without a good reason. This is a good reason.

The single-digit Nixie clocks that [Claes Vahlberg] built are, simply put, works of art. There’s a small version of the clock, featuring a single IN-16 Nixie, and a larger version that uses a Dalibor Farny custom Nixie, a work of art in its own right. Each clock has features like time and date, temperature and barometric pressure, and even days remaining in the current lunar cycle. The cases for the clocks, though, are the real treat. Hand forged from steel, they remind us of steam whistles on top of a boiler.

[Claes] doesn’t have many details on the build process — we’ve been in contact and he says he’s working on documentation — but it doesn’t matter. As if all that weren’t enough, the clocks are controlled by a remote, which has its own IN-16 tube and is motion controlled. The last bit is a nice touch since there are no buttons to distract from the smooth lines of the hammered metal case.

We gush, but we think this one really shines. That’s not to take anything away from previous Nixie-steampunk mashups, like this single-digit clock or this solar power meter. But these clocks are a step beyond.