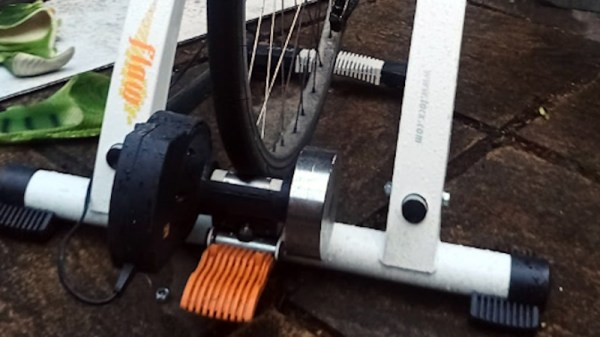 Energy cannot be created or destroyed, but the most likely eventual conclusion of changing it from one form or another will be relatively useless heat. For those that workout with certain gym equipment, the change from chemical energy to heat is direct and completely wasted for anything other than keeping in shape. [Oliver] wanted to add a step in the middle to recover some of this energy, though, and built some gym equipment with a built-in generator.

Right now he has started with the obvious exercise bike stand, which lends itself to being converted to a generator quite easily. It already had a fairly rudimentary motor-like apparatus in it in order to provide mechanical resistance, so at first glance it seems like simply adding some wires in the right spots would net some energy output. This didn’t turn out to be quite so easy, but after a couple of attempts [Oliver] was able to get a trickle of energy out to charge a phone, and with some more in-depth tinkering on the motor he finally was able to get a more usable amount of energy to even charge a laptop.

He estimates around 30 watts of power can be produced with this setup, which is not bad for a motor that was never designed for anything other than mechanical resistance. We look forward to seeing some other equipment converted to produce energy too, like a rowing machine or treadmill. Or, maybe take a different route and tie the exercise equipment into the Internet connection instead. 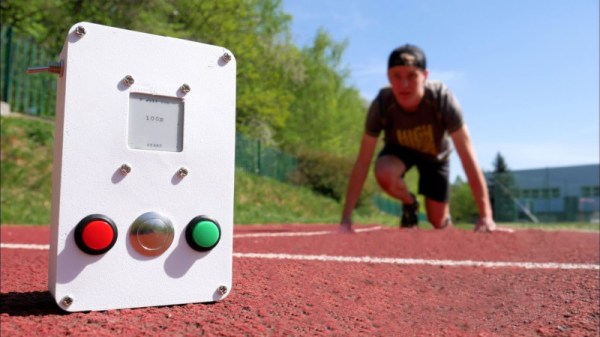 Any exercise is a positive thing, but if you’re looking to improve over time, you’ve got to measure your performance. [Nikodem Bartnik] is a runner and is looking to improve his sprinting abilities. Naturally, an Arduino is the perfect companion to help in this quest (YouTube link, embedded below).

The Arduino is built into a 3D printed enclosure, with several buttons for input. Rather unconventionally, a small e-paper display was chosen for the interface. This has the benefits of being easily readable outdoors during the day, as well as using very little power.

The device is simple to use, and makes training alone a breeze. The distance to be run can be selected, and the unit emits a series of beeps to indicate to the runner when to begin. The timer is placed at the finish line, and detects the runner passing by with an ultrasonic sensor.

It’s a useful build for sprint timing, and could be made even more versatile with a remote start function. If you need to time Hot Wheels instead of sprinters, don’t worry – there’s a build for you too. Video after the break.

END_OF_DOCUMENT_TOKEN_TO_BE_REPLACED 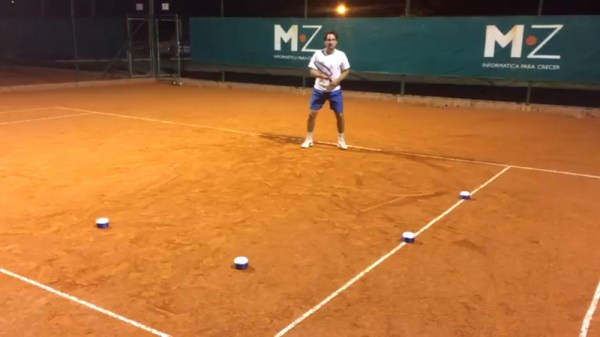 Being a top athlete in this modern age is a full-time job. No longer do athletes simply practice at their nominated sport of choice. They undergo strength training, full nutritional programs, cardio, and even reflex training.

Reflex training involves a series of nodes that an athlete must identify when lit up, and touch them to switch them off. By triggering them in a fast sequence, the athlete must work hard to both identify the lit node and then move to switch it off. TrainerLights is just such a system, built around the NodeMCU platform.

The system consists of a minimum of four lights – one acting as a server, the others as nodes. The lights each contain a nodeMCU board which communicates over WiFi, while the server has an additional board – acting as a WiFi hotspot that controls the system.

With the lights switched on, the coach connects to the server with a smartphone, and configures the lighting sequence and timings depending on the desired excercise regime. The server then communicates with the lighting nodes, which light their LEDs  at specified intervals. The athlete must clear the lights by swiping at the nodes, which detect the athlete’s hand via an ultrasonic proximity sensor. The sensitivity is configurable, to allow the system to trigger from a distant wave or a direct touch from the athlete. This allows a variety of training uses, from tennis to taekwondo.

With a 3D printed case and parts readily available from any good maker supplier, it’s a project you could tackle in a weekend to add to your own training regime.

We see plenty of athletic hacks in these parts – like this line-following robot for training sprinters. Video after the break.

END_OF_DOCUMENT_TOKEN_TO_BE_REPLACED 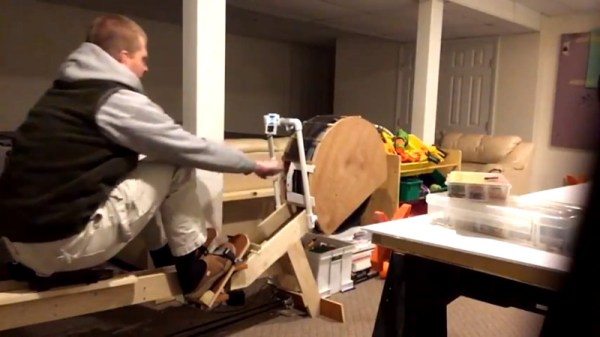 An ergometer is a fancy fitness word for a rowing machine, a device which can be used to work out the muscles used in rowing. It’s an excellent cardio workout that can also build upper body strength, and resistance can be varied depending on the individual’s fitness goals. But perhaps you need to measure your workout to see your progress – in which case, [Dave]’s instrumentation package might be right up your alley.

The basic mechanical build involves a wooden frame, fitted with a rowing setup built around a modified bicycle wheel. The wheel has vanes attached, made of what appears to be cut sections of PVC pipe. These act essentially as dampers, using the air to create the resistance for the rower to work against.

The wheel is instrumented with a chopper wheel and an IR optical switch, which measures the rotational speed of the wheel during rowing. This signal is fed into an ATMega328 which runs the calculations on the rower’s performance. It’s all fed to a Nokia 5110 screen for display, which makes a lovely throwback for those that remember the brick fondly.

[Dave] touches not only on the electronic aspects of the build, but also does an excellent job of breaking down the mathematics behind rowing performance. It’s a great resource that builds on top of the excellent work by the OpenErgo project.

If we’ve whet your thirst for exercise machine hacks, you’d better check out this treadmill to belt grinder mod.