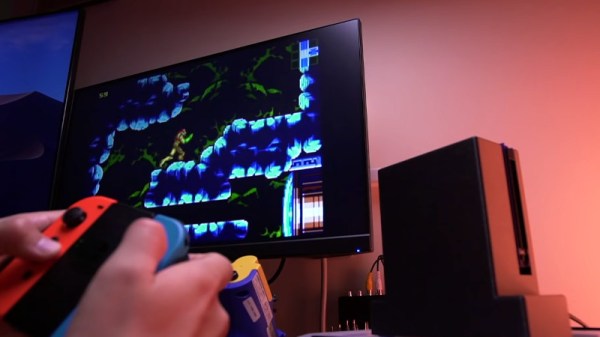 The whole idea behind the Nintendo Switch is that the system isn’t just a handheld, but can be converted into a more traditional home game console when placed into its dock. The wireless controllers even pop off the sides so you can kick back on the couch and enjoy your big-screen gaming from a distance. Judging by how many units Nintendo has sold of their latest system, it’s clearly a winning combination.

Which is probably why [Tito] of Macho Nacho and his friend [Kyle Brinkerhoff] decided to recreate some of the Switch’s core features using one of Nintendo’s older handhelds, the Game Boy Advance SP. There was already a video-out mod kit on the market for the GBA SP that would let them play games on the TV, but the team still had to figure out how to make a dock for the 18 year old handheld, plus get it working with the official Switch Joy-Cons.

Lucky, this crew is no stranger to developing impressive GBA SP add-ons. Last month they took the wraps off of an expanded 3D printed rear panel for the system that housed a number of upgrades, such as an expanded battery pack and support for Bluetooth audio.

This mod uses a similarly expanded “trunk” for the GBA, but this time it’s to hold the rails the Joy-Cons mount to, as well as the electronics required to get the modern controllers talking to the Game Boy. Namely, a Raspberry Pi Zero and a custom PCB designed by [Kyle] that uses a dozen transistors to pull the system’s control inputs low when the Pi’s GPIO pins go high.

[Tito] doesn’t seem to mention it in the video below, but we’re assuming the dock component of this project is just a 3D printed box with a connector sticking up for the GBA SP’s link cable port, since that’s where the TV-out modification outputs its video. Incidentally that means you don’t really need the dock itself, but it certainly looks cool.

At the end of the video [Tito] goes over a few of the rough edges of the current build, including the rather lengthy pairing process to get the Joy-Cons talking to the Raspberry Pi. But ultimately, he says that not only does the system feel good in his hands, but playing those classic games on the big screen has been a nice change of pace.

END_OF_DOCUMENT_TOKEN_TO_BE_REPLACED 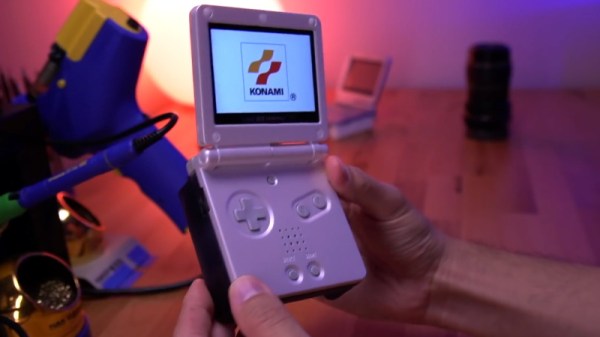 Back in August we covered a unique modification for the Nintendo Game Boy Advance SP which replaced the handheld’s rear panel with an expanded version that had enough internal volume for an upgraded battery, a Bluetooth audio transmitter, and support for both Qi wireless and USB-C charging. The downside was that getting the 10 mm 3D printed “backpack” installed wasn’t exactly the most user-friendly operation.

But today we’re happy to report that the dream team behind the so-called THICC BOI SP have not only made some huge improvements to the mod, but that they intend to release it as a commercial kit in the next few months. The trick to making this considerable upgrade a bit more forgiving is the use of a bespoke flat flex cable that easily allows the user to solder up all the necessary test points and connections, as well as a custom PCB that pulls together all the hardware required.

In the video below, [Tito] of Macho Nacho Productions goes over the latest version of the mod he’s been working on with [Kyle] and [Helder], and provides a complete step-by-step installation tutorial to give viewers an idea of what they’ll be in for once the kit goes on sale. While it’s still a fairly involved modification, the new design is surprisingly approachable. As we’ve seen with previous console modifications, the use of flat flex technology means the installation shouldn’t pose much of a challenge for anyone with soldering experience.

Some may be put off by the fact that the replacement rear panel is even thicker this time around, but hopefully the unprecedented runtime made possible by the monstrous 4,500 mAh LiPo battery pack hiding inside the retrofit unit will help ease any discomfort (physical or otherwise) you may have from carrying around the chunkier case. Even with power-hungry accouterments like an aftermarket IPS display and a flash cart, the new battery can keep your SP running for nearly 20 hours. If you still haven’t beaten Metroid: Zero Mission by then, it’s time to take a break and reflect on your life anyway.

According to [Tito], the logistical challenges and considerable upfront costs involved in getting the new rear panels injection molded in ABS is the major roadblock holding the release of the kit back right now. The current prototypes, which appear to have been 3D printed in resin, simply don’t match the look and feel of the GBA SP’s original case well enough to be a viable option. A crowd funding campaign should get them over that initial hump, and we’ll be keeping an eye out for more updates as things move along towards production.

The previous version of this mod was impressive enough as a one-off project, but we’re excited to see the team taking the next steps towards making this compelling evolution of the GBA more widely available. It’s a fantastic example of what’s possible for small teams, or even individuals, when you leverage all the tools in the modern hardware hacking arsenal.

END_OF_DOCUMENT_TOKEN_TO_BE_REPLACED 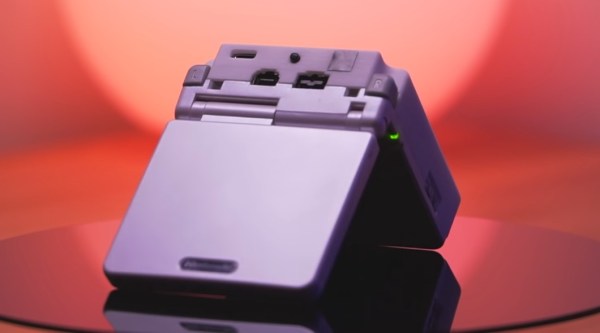 While there’s nothing quite like running retro games on their original hardware, using older consoles in today’s day and age can be a hassle due to incompatibilities with modern chargers and headphones. [tito] and [kyle] worked together to update Nintendo’s Game Boy Advance SP with a whole bunch of new features, tightly packed inside a 3D-printed replacement backshell. (Video, embedded below.)

The original 600 mAh battery has been replaced with a 1600 mAh pack for several hours of additional screen time. A Qi standard wireless power module as well as a USB-C connector allows charging the battery without carrying the original mains adapter. A Bluetooth module enables the use of wireless headphones, and a 3.5 mm jack enables classic earbuds as well, a feature lost when the SP replaced the original GBA.

The new backshell fits exactly on the original console, making it about 10 mm thicker. Although this makes it slightly less portable, it is apparently more comfortable to hold for those with big hands. The new functionality is implemented using off-the-shelf circuit boards, connected together with flying wires that are soldered to the required points on the GBA’s circuit board. The original connectors and switches remain in place and functional, and the entire operation can be undone if you want to return the device to its original state.

Others have added USB charging to the original GBA, or even stretched that handheld to become twice as wide. But adding significant new functionality previously required replacing the handheld’s entire contents.

END_OF_DOCUMENT_TOKEN_TO_BE_REPLACED

It’s not the biggest use of a Raspberry Pi, but running emulators for old game systems is by far the most visible use of the Pi. In fact, putting Pis inside old game systems has led to a resurgence of case modding not seen since the heyday of the Mini-ITX craze of the early ‘aughts.

You’d think every possible Pi casemod had been done by now, but [frostedfires] is still raising the bar with a Pi casemod that stuffs a clone of everyone’s favorite credit card sized computer into a Game Boy Advance SP.

[frostedfires] isn’t using a real Raspi from The Foundataion. Instead, he found the Odroid W, a raspi compatible board that’s about half the size of a model B. It still has everything needed to complete the build – analog video out, a reasonable Linux system, and enough processing power to run Quake III. Right now, [frostedfires] has the screen working – that was taken from a car backup camera. Other than that, the only portion of the build left to go is a few buttons.

This is officially the smallest derivative casemod we’ve ever seen. the previous record holder was the still tiny Game Boy Pocket build from last summer. That build required heavy modifications to the Model B board, though, so if you’re aiming for a smaller build, the Odroid is the way to go.

Thanks to the Bacman forums for yet another great build.