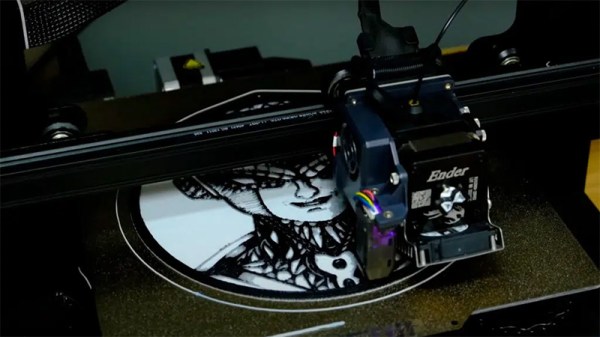 When you imagine 3D printed art, it’s easy to envision the different kinds of sculptures and figurines posted online. While these projects take plenty of time and creativity on their own, [César Galera] shows us a different way to make 3D printed art by turning 2D images into fully textured 3D prints.

This project follows a similar technique that stems from lithophanes, which produces an image from light that passes through the object. [César] instead details in the video below the break how to use the ItsLitho tool to build completely opaque black and white images using a multicolored printer.

Lithophanes are built (or printed) by mapping topography to make light easier or harder to pass through in certain places. Areas that appear darker are thicker with more layers, and areas that appear lighter have less. It’s a nifty optical illusion, but these kinds of art blocks aren’t actually multicolored themselves.

The trick is to develop the 3D model using the lithophane tool first to create the different elevations (ensuring that the lowest elevation is still thick enough to be opaque), but retain the different colors on the model when it’s exported. Multi-colored 3D printers will then be able to add gray and black filament as it prints higher and higher elevation. If you don’t have a multi-colored printer, you can add pauses on the 3D print file to switch out filaments after a few layers to achieve a similar effect.

We’re always on the lookout to see the different things we can print, and being able to turn digital artwork into a 3D model is a great example!

END_OF_DOCUMENT_TOKEN_TO_BE_REPLACED 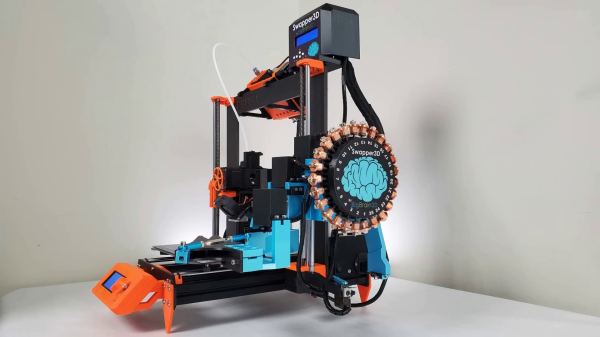 Multicolor printing on FDM machines can be tricky to get working flawlessly, and purging hotends when changing colors can end up wasting a lot of filament and material. To solve this problem for the popular Prusa i3 and Ender 3 printers, [BigBrain3D] developed the Swapper3D, an automated system that swaps the entire hotend when the material is changed, eliminating the need for purging almost entirely. Video after the break.

The Swapper3D works very similarly to the tool-changing systems on CNC machines, and is just as satisfying to watch. A large circular carousel on the side of the machine holds up to 25 hotends, and in practice, a pair of robotic arms pop out the previous hotend, cut the filament, and load up the specified hotend from the carousel. This means you can have a separate hotend for each color or type of filament. Since most existing hotends also integrate the heating element, [BigBrain3D] created a special hotend assembly that can be robotically removed/inserted into the heater block.

The Swapper3D is designed to be used with existing filament changers like the Prusa MMU and the Mosaic Palette. Using these systems involves a lot of purging, to the point where you sometimes end up using more filament during purging than you need for the actual part. On one five-color demo print, the Swapper3D reduced the print time by 45% and the filament used by a massive 86%. It also helps to eliminate problems like stringing and color fading in multicolor prints. With those advantages, it looks like the Swapper3D might be a worthwhile upgrade if you do a lot of multi-color printing, even though it adds quite a bit of complexity to the printer.

For larger, more expensive machines, swapping the entire toolhead is becoming more popular, with even E3D stepping into the fray.

END_OF_DOCUMENT_TOKEN_TO_BE_REPLACED

Lots of solutions have been proposed and enacted for multi-color and multi-material 3D printing, from color mixing in the nozzle to scripts requiring manual filament change. A solution proposed fairly early on was to manually splice the filament together, making a custom spool. The printer would print as normal, but the filament would change color. This worked pretty well, but it was tedious and it wasn’t entirely possible to control where the color change happened on the model.

You’ll find some examples of the more successful manual splicing hacks in the pictures below. Scroll down a bit further to find our interview with Mosaic Manufacturing at Bay Area Maker Faire 2016. They have a new product that automates the filament splicing process with precision as the ultimate goal. It unlocks a single extruder printer to behave like a multi-extruder model without stopping and starting.

Mosaic pulled off a very difficult combination of two methods mentioned above. Their flagship product is a machine they’ve dubbed, “Palette”. It’s an automatic filament splicer. Up to four different filaments can feed into Palette, and it will splice them at determined intervals. This would be cool by itself, if only to save the tedium of splicing and winding a custom spool by hand.

The real killer app with Palette, however, is the software that runs alongside it. Palette can take the GCODE output of any properly prepared multi material file from any slicer, and then precisely combine and splice the filament. This can feed into any printer without modifying it, aside from sticking an encoder somewhere in the filament path. The results are indistinguishable from a dual, or quad extruder set-up.