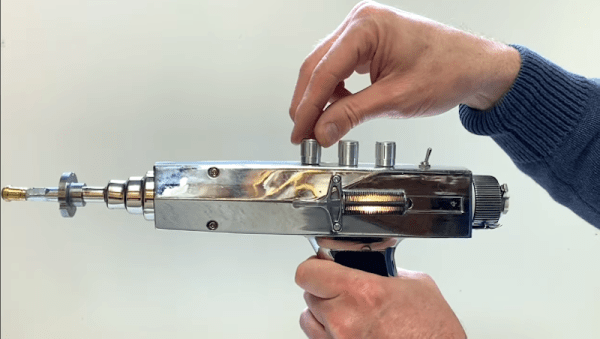 When we first saw [lonesoulsurfer’s] ray gun, we thought it looked oddly familiar. Sure, it looks like a vintage ray gun you might see in a dozen 1950-era movies or TV shows. But still, there was something oddly familiar about it. Turns out, the core piece of it is an old-fashioned timing light used when doing a car tune-up.

This is no unobtrusive Star Trek phaser. It looks substantial and has a cool sound generator that not only gives it something to do but also sports cool control knobs out the top of the gun. The design files for the sound circuit are in a Google drive folder if you want to recreate the build.

END_OF_DOCUMENT_TOKEN_TO_BE_REPLACED 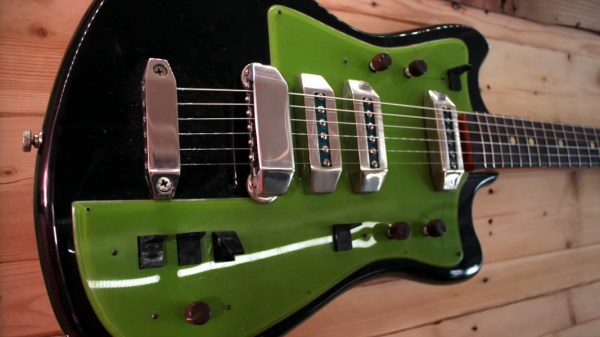 What do you do with a cool-looking misfit guitar that has non-working built-in effects and some iffy design aspects? Do you try to fix it and keep it original, or do you gut it and strut your stuff with new bits from around the shop? This is the conundrum that [Tim Sway] finds himself in with this late 70s/early 80s Formanta Solo II straight out of the USSR. (Video, embedded below.)

[Tim] likes a lot of things about it (and we do, too), especially the acid green pick guard, the sparkly pickups, and the beefy bridge that lets him set the string spacing individually, on the fly. It even has a built-in phaser and distortion, but those aren’t working and may never have worked that well at all.

As you can see in the video below, [Tim] has already spent a few hours making it playable and a little more palatable in order to figure out what to do with it electronics-wise. He started by making the 9 V compartment big enough to actually fit a battery inside, and drilled out bigger holes for new tuners.

Interestingly, these guitars had a 5-pin DIN receptacle instead of a 1/4″ jack. [Tim] bought an adapter just in case, but once someone dug up a schematic and sent it over, he decided to rewire it with a 1/4″.

For all of its plus sides, [Tim] doesn’t like the headstock on this thing at all and found the neck to be too chunky for the modern guitarist, so he cut down the headstock, shaved down the neck a bit, and stained it dark. He also made a new nut out of what looks like rosewood. Then it was on to the more standard stuff — file down the frets and polish them, oil the fretboard, and clean up the body.

The point of this exercise is to make a usable guitar for the modern musician. As [Tim] says, this is not a particularly valuable guitar, nor is it rare, and it wasn’t built that well to begin with. One of the issues is the switches — they’re kind of light and cheesy feeling, and one of them is directly in the strum path. Will [Tim] change those out but fix the original effects, or will he make the thing completely his own? We wait with bated breath.

Want to mess around with cheap old guitars, but don’t know where to start? Our own [Sven Gregori] has your back with Axe Hacks. 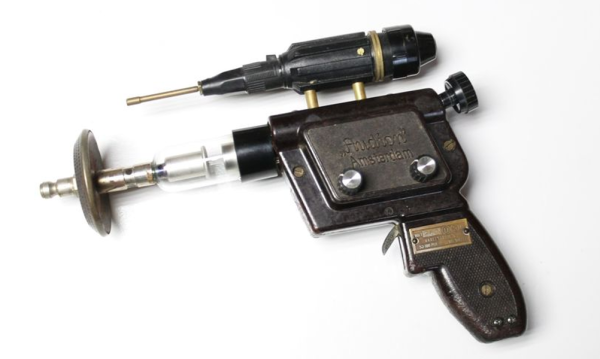 END_OF_DOCUMENT_TOKEN_TO_BE_REPLACED

Faced with a printer that would stop printing for no apparent reason, Finnish pirate and hacker [Janne] decided he had had enough. After doing a bit of research, he disassembled the drum assembly and replaced some components. The end result? Supposedly ‘broken’ printers started working again.

END_OF_DOCUMENT_TOKEN_TO_BE_REPLACED END_OF_DOCUMENT_TOKEN_TO_BE_REPLACED

[Directive0] added a 200mW laser to his Enterprise Phase Pistol toy. This joins the ranks of hand-held laser hacks that we’ve seen around here lately. His build makes use of the stun and kill settings of the toy to switch between different modes. The built-in 9 volt battery holder is tapped into for power. When set to stun, the stun LED indicator is illuminated and a trigger pull sends current limited electricity to the laser diode. When the kill (or blind) setting is selected, the appropriate LED is illuminated and the trigger sends the full current from the battery to the laser diode. Power regulation is managed by the driver circuit for the laser.

This build preserves the unmodded look of the toy gun. [Directive0’s] inclusion of protective glass should fend off the warnings we usually see in the comments of these types of hacks.

Phasers come with two settings: stun and kill. [Luke] took this seriously when he put two Blu-ray lasers into a toy raygun. He picked up the toy from Amazon for about twenty bucks and set to work.

The laser diodes are both pulled out of a 6x BD-R burner, which we think is a pretty expensive source to scavenge from. [Luke] removed the toy circuitry, reusing the trigger, top switch, and battery pack. The two diodes are mounted on a swiveling carriage which is turned 180 degrees to switch between the two diodes. A boost driver converts the 3v from the batteries up to 7v for the diodes.

This is a skillful conversion and [Luke] should be proud. Don’t miss the video after the break and if you’re thirsty for more take a look at the last hand held laser we featured.