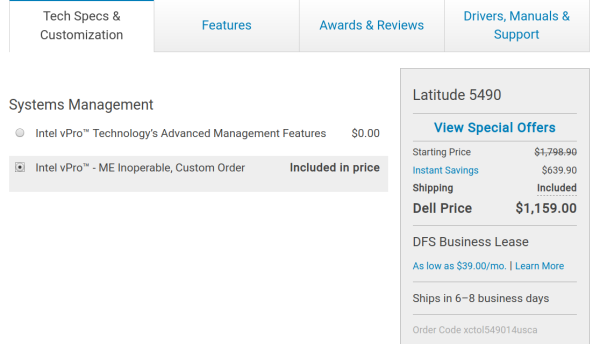 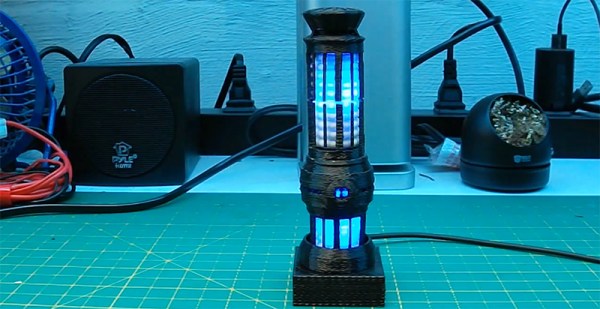 Designed in the 2350s at the Utopia Planita shipyards, the warp core found in Galaxy class starships Yamoto, Odyssey, Challenger, and yes, Enterprise was a incomparable work of engineering, leading to more than one Daystrom Prize for its development. We’re still at least fifteen years away from the great [Zefram Cochrane]’s birth – and another 200 years until [Richard Daystrom] is born – but now, thanks to our advanced technology, a miniature warp core is within reach.

About a year ago, [Alex] found a warp core table lamp based on the one found on the Enterprise. it called out to him, but it’s a an extremely large build and only having a Solidoodle 2 as a 3D printer, [Alex] decided to scale it down to 25%.

Inside the warp core are a few Neopixel strips driven by a 5V Trinket. It’s not the ideal solution – if all the LEDs are turned on at the same time, the Trinket will brown out. It’s enough for an accurate pulsating effect, though, and was a nice enough gift to appease even the most discerning Trek fans he gave these mini models to.

END_OF_DOCUMENT_TOKEN_TO_BE_REPLACED

You can try to be unimpressed. You can attempt to feign disinterest. But even the most casual Star Trek fan will get giddy watching this model submarine in action.  Apparently there is a group that builds under water R/C vehicles from static models. It’s not Star Trek exclusively either, we saw some anime vehicles as well as a modern-day shuttle replica.

[Directive0] added a 200mW laser to his Enterprise Phase Pistol toy. This joins the ranks of hand-held laser hacks that we’ve seen around here lately. His build makes use of the stun and kill settings of the toy to switch between different modes. The built-in 9 volt battery holder is tapped into for power. When set to stun, the stun LED indicator is illuminated and a trigger pull sends current limited electricity to the laser diode. When the kill (or blind) setting is selected, the appropriate LED is illuminated and the trigger sends the full current from the battery to the laser diode. Power regulation is managed by the driver circuit for the laser.

This build preserves the unmodded look of the toy gun. [Directive0’s] inclusion of protective glass should fend off the warnings we usually see in the comments of these types of hacks.

[Wolf] built this LED Enterprise model. It’s a ‘sparebot‘ assembled from leftover LEDs and resistors. Unlike most sparebot sculptural oddities, this one actually works. If you place it near a magnet, a reed switch closes to turn on the LEDs. A mechanical switch would have just caused more stress on the model. The part count is very low, but took some forethought. Two resistors are used to raise the resistance of the red LEDs to match the white LED. A quite clever and simple model.