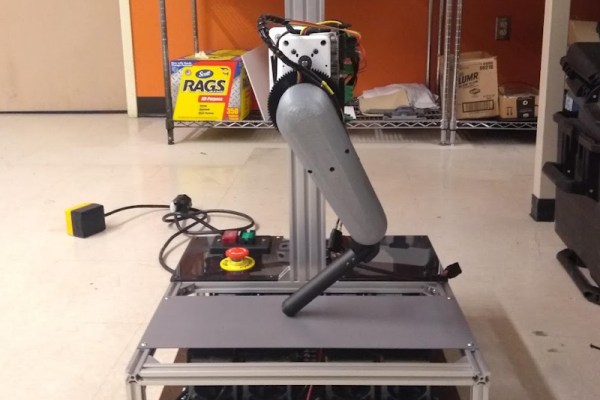 There’s an old saying about standing on the shoulders of giants, but how about doing so with an open source leg? Well, your robots might do so at least, thanks to OpenLeg, a new open source project for building robot legs. Created by [Joey Byrnes], this started out as a senior project for a course at the University of Illinois. The idea is to create a robot leg that others can use to build four-legged robots that can amble around the neighborhood, much like those built by Boston Dynamics. END_OF_DOCUMENT_TOKEN_TO_BE_REPLACED 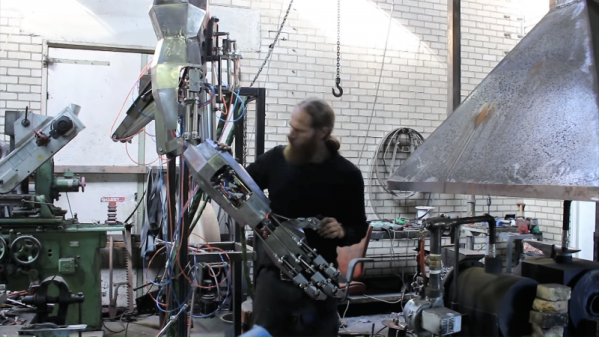 Fair warning that [Freerk Wieringa]’s videos documenting his giant non-electric robot build are long. We’ve only watched the first two episodes and the latest installment so far, all of which are posted after the break. Consider it an investment to watch a metalworking artist undertake an incredible build.

The first video starts with the construction of the upper arm of the robot. Everything is fabricated using simple tools; the most sophisticated tools are a lathe and a TIG welder. As the arm build proceeds we see that there are no electronic controls to be found. Control is through hydraulic cylinders in a master-slave setup; the slave opens a pneumatic valve attached to the elbow of the arm, which moves the lower arm until the valve closes and brings the forelimb to a smooth stop. It’s a very clever way of providing feedback without the usual sensors and microcontrollers. And the hand that goes at the end of the arm is something else, too, with four fingers made from complex linkages, all separately actuated by cylinders of their own. The whole arm looks to be part of a large robot, probably about 3 or 4 meters tall. At least we hope so, and we hope we get to see it by the end of the series.

True, we’ve seen terrifyingly large robots before, but to see one using fluid power for everything is a treat.

END_OF_DOCUMENT_TOKEN_TO_BE_REPLACED

There is a lot to be said for replacing certain kinds of jobs with robots. Most people would agree that replacing physical human labor with automation is a good thing. It’s especially good to automate the dangerous kinds of labor like some facets of factory work. What about automation in fields that require more mental labor, where physical strain isn’t the concern? Is replacing humans really the best course of action? A year ago, a video called Humans Need Not Apply set forth an explanation of how robots will inevitably replace us. But that narrative is a tough sell.

Whether it is even possible depends on the job being automated. It also depends on how far we are able to take technology, and the amount of labor we are willing to offload. Automation has been replacing human workers in assembly and manufacturing industries for years. Even with equipment and upkeep expenses, the tireless nature of robotic workers means dramatically lower overhead for businesses.

Many of the current forms of factory automation are rather dumb. When something goes wrong and their task is compromised, they keep chugging away. That costs time and money. But there are companies out there producing robots that are better on many levels.

May Your Robot Overlords Be Cute and Cuddly

In 2013, Rethink Robotics started filling orders for a new line called Baxter. They are a class of general purpose robot that can be programmed to do many kinds of manual tasks. Baxter bots have vision, and they can learn how to do a job simply by watching. They don’t need to be programmed in the traditional sense.

Baxter even has a face – a screen that shows different expressions depending on his state. When he’s in the midst of a task, his eyes are cast downward. If something goes wrong, he stops what he’s doing. His cartoon face appears sort of shocked, then sad. He goes into safe mode and waits to be fixed.