You might think the game of Rock Paper Scissors is just the random chance, but that’s not true. There is a strategy for Rock Paper Scissors, multiple ones in fact, and the best human players can consistently beat any Joe Schmoe off the street. But what about computers? [Paul] answered that question with a tiny little keychain dongle that can beat you at Rock Paper Scissors.

This is a neural network, and you need to train a neural network, so where did [Paul] get all that data? roshambo.me offers thousands of paper rock scissor games, and trained the network on more than 85,000 human games, along with about 10,000 simulated games. Rock Paper Scissors isn’t a complicated game at all, and the entire neural network is stored on an ATtiny1614 microcontroller. The calculations are done as floats, even. That’s how non-computationally intensive this project is.

Building a neural network is one thing, but putting it in a handy keychain enclosure is something else. This handsome device fits on a PCB just larger than a 2032 coin cell battery and is enclosed in a 3D printed case. The buttons are 3D printed as well, with some clever application of fiber optic as light pipes for the LEDs. The end result is something that is slightly better than random chance at Rock Paper Scissors and shows off some matrix programming skills. Check out the video below.

END_OF_DOCUMENT_TOKEN_TO_BE_REPLACED 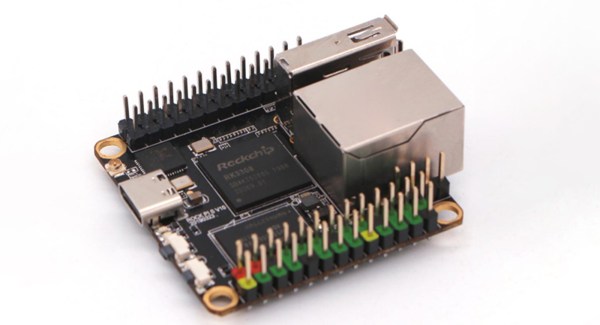 This one comes from the boffins at Radxa, already behind the footnote-worthy Rock Pi 4, a single board computer that appears to be heavily derived from the Raspberry Pi but with a 4 in the name so it’s obviously better. It also has 4 GeeBees of RAM, so it’s got that going for it too. Their latest product is the Rock Pi S, a board that seems as though it’s taking inspiration from the C.H.I.P.. The biggest selling point is of course the price: $10 for the version with 256MB of RAM and without WiFi or Bluetooth. Various other incarnations exist with permutations of 256MB or 512MB of RAM, and with or without WiFi and Bluetooth. The highest spec variant costs $16, but is sold out at the moment.

This tiny little single board computer fills a need in the marketplace; the Raspberry Pi Zero is cheap and small when it’s available, but sometimes you need Ethernet for various reasons and a real USB A port is great to have. We’re looking forward to the builds this tiny board enables and all the fantastic creations that will come from a community so very interested in single board computers. 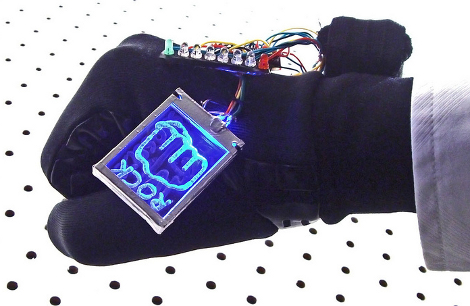 [Steve Hoefer] pulled together a great hack for the friendless. This glove will play a heated game of rock-paper-scissors against you. [Steve] realized that the middle and fourth fingers are all that need to be monitored to decide which of the three signs you are making. He used flex sensors on the back of these fingers as an input. There is also an accelerometer to judge the three shakes that lead up to the shoot.

The small screen you see displays what the glove chose and is a hack in itself. This idea adapts from an Evil Mad Scientist project, using three sheets of acrylic etched with the different icons and edge-lit with LEDs. All of this, along with a speaker and scoreboard, connect to an Arduino. The icing on the cake? [Steve] coded an adaptive learning algorithm that observes your playing style to gain an advantage.

See this in action after the break. Once you’ve mastered rock-paper-scissors you should consider building other glove-based peripherals.

END_OF_DOCUMENT_TOKEN_TO_BE_REPLACED

Anyone with children will understand the value of this project immediately. This is an Arduino controlled sound activated crib rocker. [Lars] built a custom suspension system for his baby’s crib which allows a servo, mounted to the floor to rock it gently back and forth. Ok, maybe it’s a vigorous rocking, but that’s what some kids want. At least he’s safe and moderately immobile. He had to make a custom amplifier circuit to get his microphone working with the Arduino. It seems to all work perfectly now, triggering to begin rocking when it detects the baby’s cries. This should buy them a few extra minutes of sleep until the baby is truly hungry or annoyed. You can see a video of it in action and download the Arduino code on the project page.