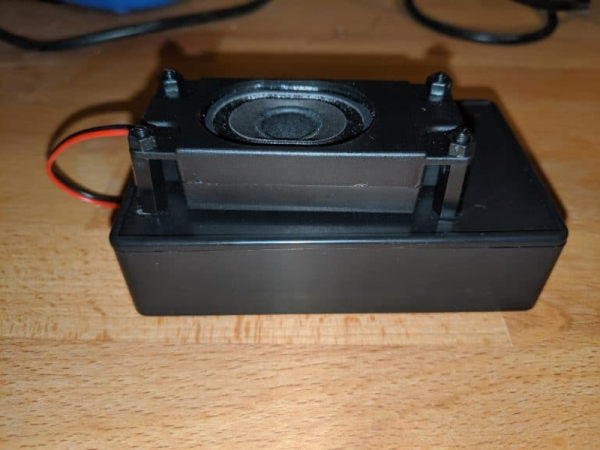 [Zack] had trouble getting his six-month-old to sleep through the night. That was before he found out about ‘shh’ videos on YouTube. These are exactly what they sound like: eight hours of someone whooshing white noise into a microphone. He set a phone up on a charger in the nursery and let one of these play overnight. But the phone was unreliable. It would lock up, or just crash completely, making the baby’s distress worse.

To restore peace in the house, he built a sound machine that both simplifies and fortifies the white noise shh-loution. It uses an ESP8266 and a DFPlayer Mini to loop a lone MP3 file of shh-video audio and play it from a small speaker. By integrating the machine with Home Assistant, he’s able to trigger the sound remotely at baby’s bedtime. ESP Home has no module for the DFPlayer, but [Zack] built one that he’s happy to share.

If you are mired in early parenthood, this is a nice, simple solution. The DFPlayer does all the work of reading from the SD card and converting the signal to analog for speaker output, so there’s no need to get your hands dirty wasting valuable sleeping or kid-playing time.

Once the kid starts toddling out of babyhood, [Zack] could turn to ESP8266-based ambient lighting to help establish the difference between sleep and wake time.

[Mike Clifford] of [Modustrial Maker] had not one, not two, but five friends call him to announce that their first children were on the way, and he was inspired to build them a Bluetooth speaker with a unique LED matrix display as a fitting gift. Meant to not only entertain guests, but to audio-visually stimulate each of their children to promote neurological development.

Picking up and planing down rough maple planks, [Clifford] built a mitered box to house the components before applying wood finish. The brain inside the box is an Arduino Mega — or a suitable clone — controlling a Dayton Bluetooth audio and 2x15W amp board. In addition to the 19.7V power supply, there’s a step down converter for the Mega, and a mic to make the LED matrix sound-reactive. The LED matrix is on a moveable baffle to adjust the distance between it and a semi-transparent acrylic light diffuser. This shifts the light between sharp points or a softer, blended look — perfect for the scrolling Matrix text and fireplace effects! Check it out!

END_OF_DOCUMENT_TOKEN_TO_BE_REPLACED 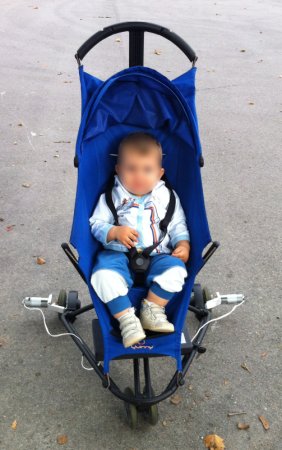 So you’ve had your first child. Congratulations; your life will never be the same again. [Dusan] was noticing how the introduction of his children into his life altered it by giving him less time for his hobbies in his home laboratory, and decided to incorporate his children into his hacks. The first one to roll out of his lab is a remote-controlled baby stroller.

After some engineering-style measurements (lots of rounding and estimating), [Dusan] found two motors to drive each of the back wheels on a custom stroller frame. He created a set of wooden gears to transfer power from the specialized motors to the wheels. After some batteries and an Arduino were installed, the stroller was ready to get on the road. At this point, though, [Dusan] had a problem. He had failed to consider the fact that children grow, and the added weight of the child was now too much for his stroller. After some adjustments were made (using a lighter stroller frame), the stroller was eventually able to push his kid around without any problems.

This is an interesting hack that we’re not sure has much utility other than the enjoyment that came from creating it. Although [Dusan]’s kid certainly seems to enjoy cruising around in it within a close distance to its operator. Be sure to check out the video of it in operation below, and don’t forget that babies are a great way to persuade your significant other that you need more tools in your work bench, like a CNC machine for example.

END_OF_DOCUMENT_TOKEN_TO_BE_REPLACED 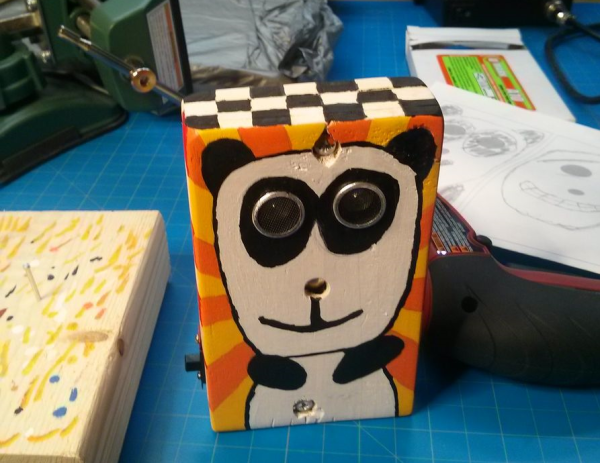 The circuit uses an ATtiny85. The program watches the ultrasonic PING sensor for a change in distance. It then plays an audio tone out of a small speaker, which changes pitch based on the distance detected. The result is a pitch that is lower when your hand is close to the sensor, but higher when your hand is farther away. The case was painted with the image of a panda on the front, hence the name, “Pandaphone”. Based on the video below, it looks like the recipient is enjoying it! END_OF_DOCUMENT_TOKEN_TO_BE_REPLACED 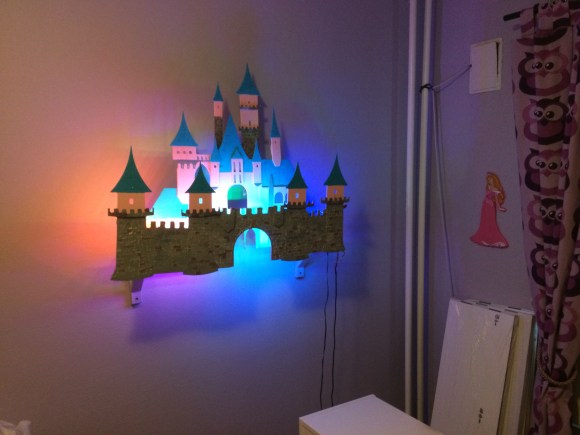 END_OF_DOCUMENT_TOKEN_TO_BE_REPLACED

[Gjoci] just became a father, and to make up for not having to carry a baby to term he decided to make himself useful in another way. He developed a sensor to detect a baby’s breathing, allaying the fears of nervous parents who are wondering why their child is so quiet.

Unlike similar builds and products that rely on microphones or capacitive sensors, [Gjoci]’s build uses the camera from a wiimote to triangulate points of light and detect motion.

The build started off with infrared LEDs, but the batteries were big and there is always the possibility of the baby swallowing electrical components. [Gjoci] finally hit upon the idea of using small 1mW laser diodes to project points of light. This worked beautifully, and since newborns don’t move much there’s no danger of shining a laser into a baby’s eye.

The rest of the build is just querying the camera every few milliseconds and seeing if the position of the reflections captured by the wiimote camera have changed. In two weeks of operation, [Gjoci] only had to respond to a few false alarms, and the hardware hasn’t crashed at all.

After the break are three videos [Gjoci] put up for us that show a test of the breathing detection system, a demo of the alarm, and an example of the build in full operation. A very awesome build, and we look forward to this post being used as evidence of prior art in a patent dispute a few years down the line.