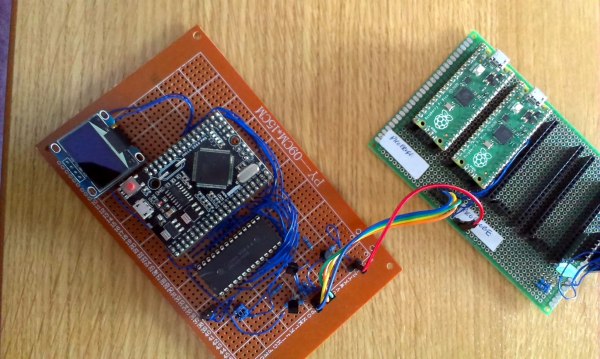 You can’t fake that feeling when a $4 microcontroller dev board can stand in as cutting-edge 1980s technology. Such is the case with the working transputer that [Amen] has built using a Raspberry Pi Pico.

For a thorough overview of the transputer you should check out [Jenny List’s] longer article on the topic but boiled down we’re talking about a chip architecture mostly forgotten in time. Targetting parallel computing, each transputer chip has four serial communication links for connecting to other transputers. [Amen] has wanted to play with the architecture since its inception. It was expensive back then and today, finding multiple transputers is both difficult and costly. However, the RP2040 chip found on the Raspberry Pi Pico struck him as the perfect way to emulate the transputer design.

The RP2040 chip on the Pico board has two programmable input/output blocks (PIOs), each with four state machines in them. That matches up perfectly with the four transputer links (each is bi-directional so you need eight state machines). Furthermore, the link speed is spec’d at 10 MHz which is well within the Pico’s capabilities, and since the RP2040 runs at 133 MHz, it’s conceivable that an emulated core can get close to the 20 MHz top speed of the original transputers.

Bringing up the hardware has been a success. To see what’s actually going on, [Amen] sourced some link adapter chips (IMSC011), interfacing them through an Arduino Mega to a computer to use the keyboard and display. The transputer architecture allows code to be loaded via a ROM, or through the links. The latter is what’s running now. Future plans are to figure out a better system to compile code, as right now the only way is by running the original INMOS compiler on DOS in a VM.

Listen to [Amen] explain the project in the first of a (so far) six video series. You can find the links to the rest of those videos on his YouTube channel.

END_OF_DOCUMENT_TOKEN_TO_BE_REPLACED 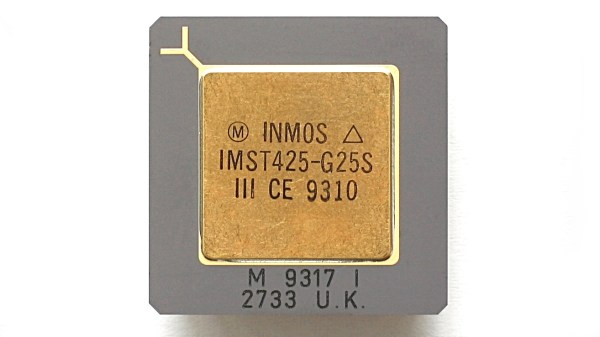 Back in 2016, Hackaday published a review of The National Museum of Computing, at Bletchley Park. It mentions among the fascinating array of computer artifacts on display a single box that could be found in the corner of a room alongside their Cray-1 supercomputer. This was a Transputer development system, and though its architecture is almost forgotten today there was a time when this British-developed microprocessor family had a real prospect of representing the future of computing. So what on earth was the Transputer, why was it special, and why don’t we have one on every desk in 2019?

Inmos, based in Bristol, were a — no, make that the — British semiconductor company, in the days when governments saw such things as a home-grown semiconductor manufacturing capability to be of strategic importance. They made microcomputer peripheral chips, RAM chips, and video chips (the workaday silicon of 1980s computing) but their exciting project was the Transputer.

This microprocessor family addressed the speed bottlenecks inherent to conventional processors of the day by being built from the ground up to be massively multiprocessor.  A network of Transputer processors would share a web of serial interconnects arranged in a crosspoint formation, allowing multiple of them to connect with each other independently and without collisions. It was the first to feature such an architecture, and at the time was seen as the Next Big Thing. All computers were going to use Transputers by the end of the 1990s, so electronic engineering students were taught all about them and encountered them in their group projects. I remember my year of third-year EE class would split into groups, each of tasked with a part of a greater project that would communicate through the crosspoint switch at the heart of one of the Transputer systems, though my recollection is that none of the groups went so far as to get anything to work. Still how this machine was designed is fun to look back on in modern times. Let’s dig in!