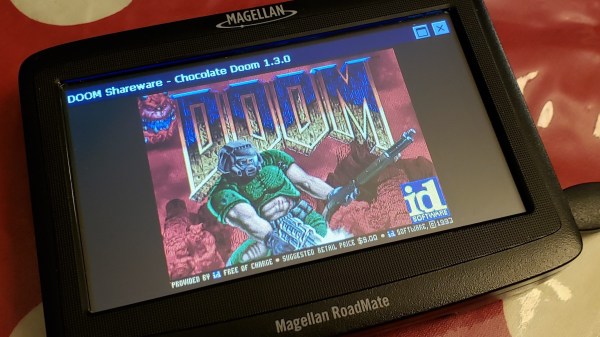 What’s the first thing you think of when you see an old GPS navigation system for sale cheap at a garage sale? Our research indicates that 100% of people would wonder if it could run Doom; at least that’s what we conclude from the single data point we have, anyway. [Jason Gin] asked and answered the question — with a resounding yes — about his recent acquisition.

The unit in question is a Magellan RoadMate 1412 running Windows CE. After some playing, [Jason] found that simply connecting the unit to a computer via USB caused all the application files to appear as a FAT-formatted volume. Replacing the obviously-named “MapNavigator.exe” with a copy of TotalCommander/CE allowed browsing around the filesystem.

This revealed that much was missing from the CE install, including the Explorer shell and command prompt. Either could be used to launch Doom with the required command-line arguments. Luckily, [Jason] had another trick ready, namely using MortScript (a scripting engine) to launch the Doom executable. This worked like a charm, and after a few tweaks, he now has a dedicated demo box.

We say “demo box” instead of “Doom machine” because without a keyboard, you can’t actually play the game — only view the demo. In a valiant attempt, he connected a USB OTG connector, but the GPS doesn’t seem to recognize input devices, only USB storage devices. Keep at it, [Jason], we’d love to see you crack this one!

[Jason] is no stranger to hacking Windows CE devices. Last time we checked in, the target was a KeySight DSO1102G oscilloscope.

END_OF_DOCUMENT_TOKEN_TO_BE_REPLACED 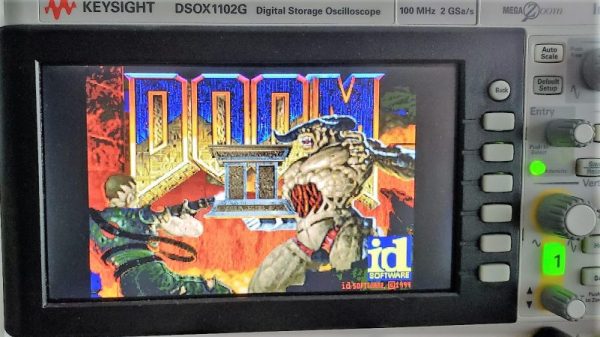 We all know the drill when buying a digital oscilloscope: buy the most hackable model. Some choose to void the warranty right away and access features for which the manufacturer has kindly provided all the hardware and software but has disabled through licensing. Few of us choose to tap into the underlying embedded OS, though, which seems a shame.

When [Jason Gin]’s scope started giving him hints about its true nature, he decided to find a way in. The result? An oscilloscope with a Windows desktop that plays Doom. The instrument is a Keysight DSOX1102G which [Jason] won during the company’s “Scope Month” giveaway. Relatively rare system crashes showed the familiar UI trappings of Windows CE.

Try as he might, [Jason] couldn’t get the scope to crash on cue — at least not until he tried leaving an external floppy drive plugged into the USB port on startup. But in order to use the desktop thus revealed, a keyboard and mouse were needed too. So he whipped up a custom USB switch cable, to rapidly toggle in the keyboard and mouse after the crash. This gave him the keys to the kingdom, but he still had a long way to go. We won’t spoil the story, but suffice it to say that it took [Jason] a year and a half, and he learned a lot along the way.

It was nice to hear that our review of the 1000X series scopes helped [Jason] accomplish this exploit. This hack’s great for bragging rights, as one way to prove you’ve owned a system is telling people it runs Doom!

END_OF_DOCUMENT_TOKEN_TO_BE_REPLACED [Evow04] has been working hard to run Android on a Meizu M8 smartphone and we’re beginning to enjoy the fruits of his labor. The Meizu M8 is a Chinese cell phone very similar in appearance and hardware to the iPhone. The factory firmware runs Windows CE 6 but there is no official support for Android. It looks like [Evow04’s] upgrade method is fairly easy; copy an IMG and BIN file to the root of the phone, backup the Windows CE portion, and then use the upgrade mode to flash the two files.

We’re pretty impressed with Android, especially the potential that it represents. Having another device that runs the OS is a good thing but at $350-$400 this isn’t any cheaper than just buying an Android phone.