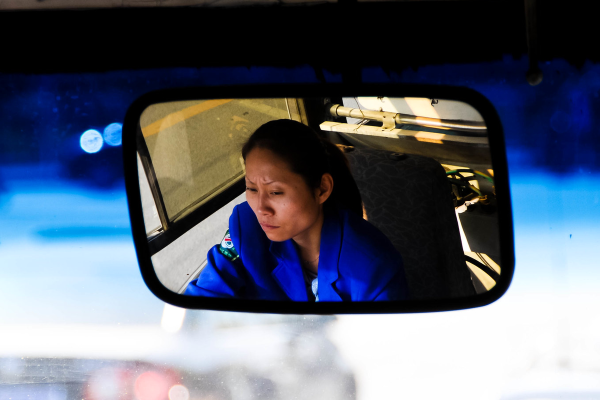 Humans aren’t always great at respecting each other’s privacy. However, common sense says there’s a clear boundary when it comes to the thoughts in one’s own head and the feelings in one’s heart.

For bus drivers in Beijing though, it seems that’s no longer the case. These professional drivers are now being asked to wear emotional monitors while on the job, raising concerns from both legal and privacy advocates. But the devices aren’t really anything more than workout monitors, and whether they can actually make good on their Orwellian promise remains to be seen.

When George Orwell wrote 1984, it was only 1949. However, he was able to foresee a world in which surveillance was omnipresent and inescapable. He also envsioned the concept of thoughtcrime, where simply contemplating the wrong things could get you in serious trouble with the authorities.

As we all know, Orwell was way off – these predictions didn’t become reality until well into the 2000s. In the latest horrifying development, technologies now exist that claim to be able to monitor one’s emotional state. Now, China’s transportation sector is rushing to push them on their workforces.

Long-distance bus drivers in Beijing are now being told to wear electronic wristbands when on the job. These wristbands claim to be able to capture the wearer’s emotional state, monitoring it on behalf of the employer. The scheme was the idea of the Beijing Public Transport Holding Group. The state-run organization claims the technology is intended for the safety of the public, and a trial of the wristbands began in July this year. END_OF_DOCUMENT_TOKEN_TO_BE_REPLACED

A person who is deaf can’t hear sound, but that doesn’t mean they can’t feel vibrations. For his Hackaday Prize entry, [Alex Hunt] is developing the Shakelet, a vibrating wristband for that notifies hearing impaired people about telephones, doorbells, and other sound alerts.

To tackle the difficulty of discriminating between the different sounds from different sources, [Alex’s] wants to attach little sound sensors directly to the sound emitting devices. The sensors wirelessly communicate with the wristband. If the wristband receives a trigger signal from one of the sensors, it alerts the wearer by vibrating. It also shows which device triggered the alert by flashing an RGB LED in a certain color. A first breadboard prototype of his idea confirmed the feasibility of the concept.

After solving a few minor problems with the sensitivity of the sensors, [Alex] now has a working prototype. The wristband features a pager motor and is controlled by an ATMEGA168. Two NRF24L01+ 2.4 GHz wireless transceiver modules take care of the communication. The sound sensors run on the smaller ATTiny85 and use a piezo disc as microphone. Check out the video below, where Alex demonstrates his build:

END_OF_DOCUMENT_TOKEN_TO_BE_REPLACED