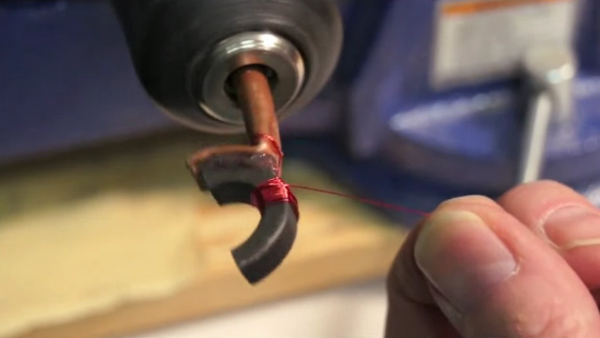 When you need a toroid the easiest source is often to wind it yourself. The problem being that placing a few hundred windings around a ferrite ring is a real drag, especially if you have to make several of them. This cheat developed by [Jim W.] will save a lot of time. He cuts the ring in half for the winding and reassembles it afterward.

Here you can see that he has half of the core mounted in a drill chuck. To get to this point he scored the ferrite before clamping half in a vice and whacking the extruding half with a block of wood and a hammer. He hasn’t found a perfect solution for scoring the material (a utility knife or a triangular file both work but have drawbacks). Leave a comment if you’ve got any bright ideas.

Once the core is in two pieces he used some copper pipe with one end flattened and bent to the shape of the ring segment. With it hot glued in place he takes it for a spin (shown in the clip after the break). Once the windings are done a bit of super glue recombines the halves. This sort of thing is great for monitoring power use.

END_OF_DOCUMENT_TOKEN_TO_BE_REPLACED

If you’ve ever worried about your car getting stolen this hack can help give you some piece of mind. It’s a cellular enabled geolocation device. These things have been in use for some time, the most common brand we know of is the LoJack. That company gives you a little box to install on the vehicle and if it ever goes missing they can grab the coordinates and forward them to the authorities. This custom version builds a lot into an addon board for an EFM32 board.

The image above shows the main components of the add-on: the GPS module and the GSM modem. Along the top edge of the board is the voltage regulator circuits which aim to keep the standby power to the slightest of trickles so as not to drain the car’s battery. What you can’t see is the SIM card slot which is located on the underside.

You can find the Eagle files for the design at the link above. We’ve embedded the video description of the project after the break.

END_OF_DOCUMENT_TOKEN_TO_BE_REPLACED 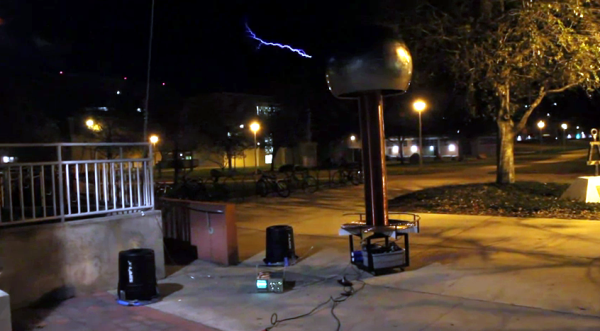 It’s a bit difficult to estimate the size of the Tesla coil from this picture, but look closely at the hand rail on the red-orange wall to the left and that helps. The 10-foot tall musical Tesla Coil project has been on-going for about two years. But the team at X-Labs — a hackerspace affiliated with the University of South Florida — finished it just in time for the University’s engineering expo later in the month. There’s some information about it to be found in the recent student newspaper article on the project. A lot more build details are found on the groups website, although that post is quite old.

You can’t call it a musical coil unless there’s a demo video, and that can be seen after the jump. What better to test the thing than by playing the Super Mario Bros. theme? We’re actually more partial to the Imperial March (it’s also fun to hear played on stepper motors).

END_OF_DOCUMENT_TOKEN_TO_BE_REPLACED 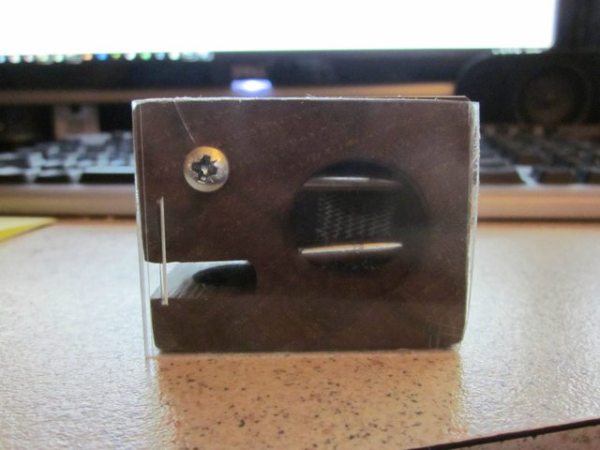 Here’s a home made vaporizer we can really get behind.

Lets just take a second to be completely honest here. There’s no point in suggesting that this is possibly for smoking tobacco.  Medical marijuana is legal (well, not federally), in several states, and we’re sure there are hackers there that would really enjoy making something of their own instead of just buying something.

We’ve covered a few below and they always seemed to have something in common. They use soldering irons for heat. Inevitably someone points out what a bad idea this is.

END_OF_DOCUMENT_TOKEN_TO_BE_REPLACED

We’ve seen scores of floppy drives play music, but never before have we seen a project as clean as [Rupert]’s Moppyduino. It’s an Arduino-based board that controls the stepper motors in six separate floppy drives, coaxing them in to playing music from a MIDI file.

The Moppyduino is more than just a convenient way to control the stepper motors in six floppy drives. It’s also a great example of what can be done with home PCB fabrication; the entire project was designed and constructed in [Rupert]’s workshop.

After designing the circuit, [Rupert] printed it out on a laser printer onto a plastic transparency sheet. This was transferred over to a copper clad board, etched, and drilled. After assembly, [Rupert] attached a USB FTDI controller to receive data converted from MIDI data with a Java app.

The end result – housed in a custom Corian enclosure – is one of the best looking floppy drive synths we’ve ever seen. You can check out the process of building this awesome instrument after the break.