The inspiration for [K.C. Lee]’s project for The Hackaday Prize didn’t come from seeing a grave injustice or inhuman suffering. He was watching Daredevil on Netflix. A show about a blind guy who fights crime in his spare time. People don’t have superhuman senses, and radioactive material falling off a truck in New York City leads to Ninja Turtles, not superheros. Still, a crude form of echolocation is well within the reach of the a capable hacker and would be very useful for those who are legally blind.

[K.C.]’s idea for human echolocation is a small wearable with ultrasonic sensors, 6DOF IMUs, and audio and haptic feedback. With a bit of math and a lot of practice, it’s possible to walk down a hallway, avoid obstacles, and find your way around without sight.

Human echolocation is a real thing, and it’s great to see a device that makes this minor human superpower a little more accessible. [K.C.] says there are 40 million people world wide that could use a device like this, and for an idea that was inspired by a superhero on TV, it’s one of the more interesting inspirations for an entry to The Hackaday Prize. 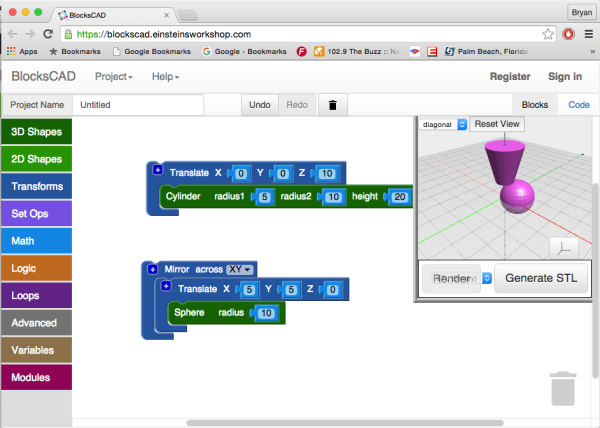 Considering all of the projects the Raspberry Pi is used for now, the fact that it was originally envisioned to be an educational tool is sometimes forgotten. One of the tools commonly available with it is Scratch, a programming language that is easy to learn and can be seen as a gateway into other computer science realms. Building on this principle, MIT has come up with a new block-based educational tool called BlocksCAD.

BlocksCAD is essentially Scratch combined with OpenSCAD and allows the user to use blocks (similar to Scratch) to build a 3D model. The interface is fairly intuitive, and with some practice even complex shapes can be created using the tools available. Also, everything runs in a browser like the 3D modeling tool we featured a few days ago, so there isn’t anything to download or install.

The key to this project (like the key to Scratch) is that the user isn’t bogged down by syntax, which is often one of the largest hurdles for anyone who is just starting to learn to program. Since it’s possible to avoid syntax but still develop 3D models, this new tool should help anyone interested in the field of 3D modeling or CAD get a start without getting scared away too easily. Of course, if you do end up deep in the field of computer science and want to learn more about this project, the developers have opened up the source code as well.

Thanks for the tip, [Matt]! 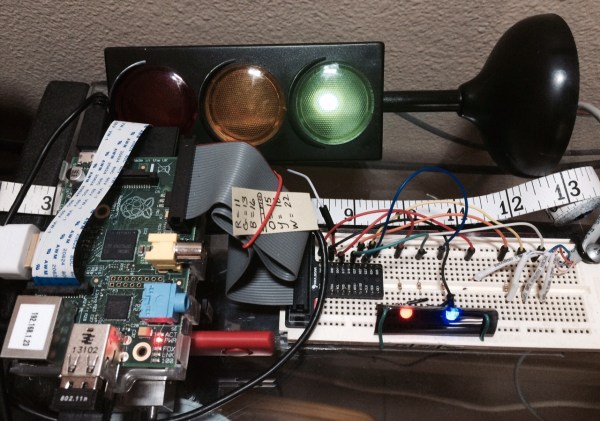 Some of us are not blessed with an always on, high availability internet connection. Sick of answering the constant “Is the internet up?” questions, go-to IT support dude [PatH] took matters into his own hands and developed an unmistakable traffic light display of internet status for his apparently low-reliability connection.

A toy traffic light from Amazon forms the core of the UI, and the lights are driven by a Raspberry Pi that pings a suite of 10 sites in round robin fashion. If a site is found to be unavailable, the Pi goes into “deep probe” mode to determine the extent of the outage, and lights up accordingly. If the light is green, the connection’s clean; if it lights up red, best go to bed. As a bonus, logs are kept of all deep probes, which may prove useful for diagnosing ISP issues.

A display like this could go a long way toward making sure you stay connected, and can reduce the workload for you as de facto IT support. Of course for a little more information about the connection speed with retro styling, you might want to throw a Dekatron at the job. 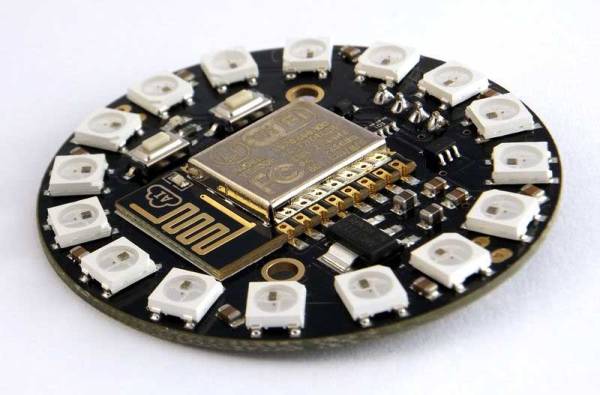 The world needs more blinky lights, and [Bertus Kruger] has created a neat way to make lights blink wirelessly. He has a footprint in the middle of the board for soldering the castellated ESP8266 module, and an LED ring around it to create the WiFi Pixel. It’s an LED ring that can be controlled over a WiFi connection. His design is based on a combination of the ubiquitous ESP8266 WiFi chip and a NeoPixel ring from AdaFruit, so there are already great examples of how to code and control the hardware. The project is still in progress, but he has released all of the details, including the Gerber files for the board and the Arduino code that the ESP8266 is running.

It’s a great start: add in battery support and you could have an awesome way to have portable LED blinky light rings. For those who want to try it out without building your own circuit boards, [Bertus] says that it could be built with an ESP8266 dev board and an Adafruit NeoPixel ring. Currently, he is running the device from USB, but there is no reason why it couldn’t be powered from a battery for some portable USB blinkiness.

END_OF_DOCUMENT_TOKEN_TO_BE_REPLACED

The goal of the RepRap project was always a machine that could replicate itself. The project began with the RepRap Darwin, a machine with a frame made nearly entirely of threaded rods, and progressed to the Mendel, with a slightly higher proportion of printed parts. Around 2011, the goal of self-replication fell by the wayside after some money was thrown around. The goal now, it seems, is to create the 3D printer with the best profit margins. That doesn’t mean there still isn’t a small contingent of RepRappers out there trying to improve the status quo and create a printer that can truly self-replicate. [Revar] is one of those tinkerers, and he has just released the RepRap Snappy, a snap-together 3D printer built nearly entirely out of 3D printed parts.

Other 3D printers designed around the idea of self-replication, like the RepRap Morgan and the Simpson family of printers, use strange kinematics. The reason for this is that Cartesian bots can’t print up to the limits of their frame, yet self-replication requires all parts be replicated at the same scale.

[Revar] is setting a new tack in the problem of printer self-replication and is joining parts together with snap fit connectors. The entire frame of the Snappy printer is built out of small parts that interlock to form larger units.

Another of the tricks up [Revar]’s scheme is reducing the number of ‘vitamins’ or parts that cannot be 3D printed. This includes belts, motors, screws, and electronics. You can’t really print machine screws yet, but [Revar] did manage to eliminate some belts and bearings. He’s using a rack and pinion system, all made with printed parts. It’s a technique that hasn’t been seen before, but it does seem to work rather well.

[Revar] has made all the files for the printed parts available in his repository. If you have enough filament, these files are enough to print 73% of the RepRap Snappy.

Thanks [Matt] for sending this one in. Video below.

END_OF_DOCUMENT_TOKEN_TO_BE_REPLACED

Friday afternoon I had the pleasure of sitting in on a surface mount soldering workshop. I’ve done some surface mount soldering before and am quite adept with a soldering iron, but this focused on solder paste and a hot air pencil. [Bob Cogeshall] ran the workshop and went beyond the most basic information. His experience founding Small Batch Assembly, a contract manufacturer whose offices are in the Nova Labs hackerspace, has led him to learn a lot of tricks of the trade.

END_OF_DOCUMENT_TOKEN_TO_BE_REPLACED

Like many engineers of a certain age I learned the resistor color code using a mnemonic device that is so politically incorrect, only Tosh might venture to utter it in public today. When teaching kids, I have to resort to the old Radio Shack standby: Big Boys Race Our Young Girls But Violet Generally Wins. Doesn’t really roll off the tongue or beg to be remembered. Maybe: Bad Beer Rots Our Young Guts But Vodka Goes Well. But again, when teaching kids that’s probably not ideal either.

Maybe you can forget all those old memory crutches. For one thing, the world’s going surface mount and color coded resistors are becoming a thing of the past. However, if you really need to read the color code, there’s at least three apps on the Google Play Store that try to do the job. The latest one is ScanR, although there is also Resistor Scanner and Resistor Scan. If you use an iPhone, you might try this app, although not being an Apple guy, I can’t give you my feedback on that one.