Since the whole point of this device is for it to get warm to the touch, I was glad to see they had the presence of mind to clad the Go Warmer with metal. But make no mistake, at just 0.5 mm thick, the two-part metallic outer shell isn’t structural. In fact, I’m sorry to say that there’s really no way to get inside the unit without doing unsightly damage to the easily bent plates and breaking off a few of the locking tabs.

Unfortunately, things don’t get much easier once you have the metal panels off. The red injection molded plastic frame is ridiculously strong, and the two sides are held together with eight clips that simply do not want to release. In the end I had to cut away some of the plastic to get the process going, and curse my way around the rest of the clips. After it finally popped open, I realized they’d even applied a liberal amount of glue for good measure. Seriously, if you don’t have an excellent reason to take one of these things apart, don’t.

Poking and prodding at the frame of the Go Warmer was made all the more stressful by the assumption that on the other side of that bright red plastic was a lithium polymer pouch cell just looking for an excuse to blow up in my face. Each time a tool slipped, I was sure a spicy pillow was about to awaken on the workbench.

But thankfully, it turns out the Go Warmer is powered by a pair of 18560 cells put together into a neat little package. With proper insulation on the side of the cells and relatively beefy wires connecting them to the PCB, we might even allow ourselves to believe that whoever designed this little fellow actually knew what they were doing.

I was also pleased to see that the advertised 4,000 mAh figure appears to be legitimate, assuming the cells are halfway decent. To that end, forums are full of references to purple SZNS cells being a common sight in laptop battery packs and the like. Weighing in at the appropriate 45 grams per cell, I’m relatively sure these aren’t fakes and would potentially be worthy of salvage should you find a good deal on Go Warmers come Spring time. Though it does depend on how much work you’re willing to put into liberating them.

Two Brains in One Body

So we’ve got some metal side panels, a couple of little heating pads, and a pair of 18650s. Sure, wire those up with a simple switch and you’ll get something plenty hot. Thankfully, the Go Warmer is a bit smarter than that. Holding the button on the side cycles through the heater and power bank modes, and quick presses let you set the heat level. But how does it work? 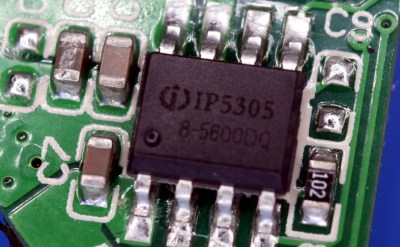 Of the three chips on the PCB, only one has its markings intact: the IP5305 by Injoinic Technology. This is a complete power bank System-On-Chip that handles everything from driving status LEDs and the charging of the cells to the boost conversion up to 5 VDC.

As an all-in-one solution, the IP5305 only needs a single inductor and a handful of passives to get up and running. This seems like a handy enough chip that it might actually be worth salvaging from the board, though if you don’t mind waiting a month or two, they can be had for pennies on AliExpress.

But what about the two unmarked chips? We can surmise one is a voltage regulator based on the pin count and the fact it’s sitting between the battery and the rest of the board, so it stands to reason that the final 14-pin IC must be the microcontroller in charge of the heater aspect of the Go Warmer. After following some traces and a bit of buzzing with the multimeter, it wasn’t too difficult to figure out which pin was used for what.

There are a few interesting things to note here. Since the IP5305 was designed as a stand-alone device and has no provision for interfacing with other chips, the MCU is employing a bit of a hack by listening to two of its LED output pins to determine what the current battery and charge status is. Also note that the physical button on the Go Warmer is directly connected to the MCU, and the signal is only passed onto the KEY pin on the IP5305 when the software deems it necessary. This allows both chips to be controlled with a one button.

Even though both heaters are controlled simultaneously with a single pin connected to a MOSFET on the other side of the board, each one has its own independent NTC. Perhaps it’s taking an average temperature of both heaters, or maybe this is a safety feature so the power can be cut if one of the heaters starts getting hotter than expected. Snooping the sensor data and comparing that with the duty cycle of the MOSFET would give us a better idea of how everything is related, but I’ll leave that as an exercise for the particularly bored reader.

From a practical standpoint, the Go Warmer is fairly lacking. With a capacity of just 4,000 mAh it’s not a very good power bank, and the tiny heating pads used to warm up the metal casing seem far too small. Even with the device cranked up to its maximum output, it only felt lukewarm to the touch. Arguably it would be better than nothing if you were out in the cold, but that’s hardly a rave review.

On the other hand, the internals ended up being far more interesting and well put together than I anticipated. The proper 18650 cells were a pleasant surprise, and the designers pulled off a rather clever hack by slipping their own MCU between the device’s physical controls and the off-the-shelf power bank SoC. Previous hybrid gadgets we’ve seen struggled to get their various functions working together in harmony, so the team behind the Go Warmer should be commended for executing it so well; even if the concept itself was a bit hokey to begin with.