[James Bruton] OpenDog remains one of the most impressive home-built robotics projects we’ve seen here on Hackaday, and it’s a gift that just keeps on giving. This time he’s working on adding force sensing capabilities to OpenDog’s legs to allow for more dynamic movement control.

The actuators in the legs are three-phase outrunner motors that drive ball-screws via a belt. This configuration is non-backdrivable, meaning the legs cannot be moved when an external force is, which could lead to mechanical failures. He as tested other backdrivable leg configurations with other robots, but did not want to rebuild OpenDog completely. The solution [James] went with is a redesigned foot with an inbuilt switch, to confirm that the foot is touching the ground, and a load cell attached in the middle of the bottom leg segment. The load cell is bolted rigidly onto the leg segment, which allows it to sense when the leg is carrying load, without damaging the load cell itself.

Unfortunately all the serial ports on OpenDog’s main Teensy 3.6 controller are already used, so he converted the signal from the load cell to PWM, to allow it to be read by a normal GPIO pin. This works well in isolation, but when [James] switches on the motors, the PWM signal from the load sensor gets flooded by interference, making it unreadable. To solve this problem, he wants to implement a CAN bus, which will allow for more inputs and outputs and hopefully solve the interference problem. However, [James] has no experience with the CAN protocol, so learning to use it is going to be a project on its own.

OpenDog is turning into a very lengthy, time-consuming project, [James] says that the lessons learned from it have been invaluable for a number of other projects. This is something to keep in mind with everything we tackle. Choose projects were the experience gained and/or relationships developed are worth it on their own, even when the project fails in a conventional sense. This way you can never really lose.

Traditionally, sockets for prostheses are created by making a plaster cast of the limb being fitted, and are then sculpted in carbon fiber. It’s an expensive and time-consuming process, and what is supposed to be a customized socket often turns out to be an uncomfortable disappointment. Though prosthetists design these sockets specifically to take pressure off of the more rigid areas of tissue, this usually ends up putting more pressure on the softer areas, causing pain and discomfort. 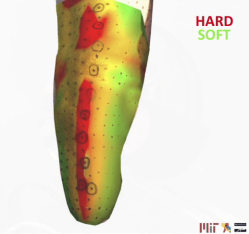 An MIT team led by [Arthur Preton] wants to make prosthesis sockets more comfortable and better customized. They created FitSocket, a machine that assesses the rigidity of limb tissue. You can see it in motion after the break.

FitSocket is essentially a ring of 14 actuators that gently prod the limb and test how much pressure it takes to push in the tissue. By repeating this process over the entire limb, [Preton] can create a map that shows the varying degrees of stiffness or softness in the tissue.

We love to see advancements in prostheses. Here’s an electronic skin that brings feeling to artificial fingertips.

END_OF_DOCUMENT_TOKEN_TO_BE_REPLACED

Almost every big corporation has a research and development organization, so it came as no surprise when we found a tip about Disney Research in the Hackaday Tip Line. And that the project in question turned out to involve human-safe haptic telepresence robots makes perfect sense, especially when your business is keeping the Happiest Place on Earth running smoothly.

That Disney wants to make sure their Animatronics are safe is good news, but the Disney project is about more than keeping guests healthy. The video after the break and the accompanying paper (PDF link) describe a telepresence robot with a unique hydrostatic transmission coupling it to the operator. The actuators are based on a rolling-diaphragm design that limits hydraulic pressure. In a human-safe system that’s exactly what you want.

The system is a hybrid hydraulic-pneumatic design; two actuators, one powered by water pressure and the other with air, oppose each other in each joint. The air-charged actuators behave like a mass-efficient spring that preloads the hydraulic actuator. This increases safety by allowing the system to be de-energized instantly by venting the air lines. What’s more, the whole system presents very low mechanical impedance, allowing haptic feedback to the operator through the system fluid. This provides enough sensitivity to handle an egg, thread a needle — or even bop a kid’s face with impunity.

There are some great ideas here for robotics hackers, and you’ve got to admire the engineering that went into these actuators. For more research from the House of Mouse, check out this slightly creepy touch-sensitive smart watch, or this air-cannon haptic feedback generator.