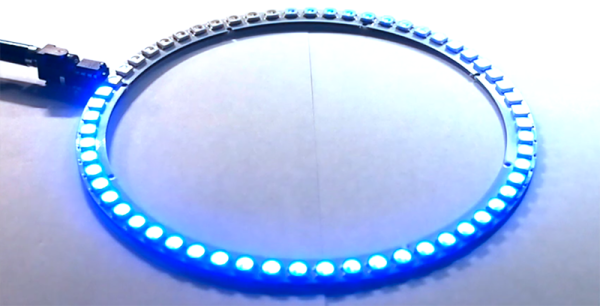 Whether you call them individually controllable RGB LEDs, WS2812, or NeoPixels, there’s no denying they are extremely popular and a staple of every glowey and blinkey project. Fresh off the reel, they’re nearly useless – you need a controller, and that has led to many people coming up with many different solutions to the same problem. Here’s another solution, notable because it’s the most minimal WS2812 driver we’ve ever seen.

JeeLabs is using the SPI bus on the LPC810 to clock out data at the rate required by the LEDs. The only hardware required is a small LED to drop the voltage from 5V to 3.3V and a decoupling capacitor. Yes, you could easily get away with this as a one-component build.

The build consists of a ring of sixty WS2812b RGB LEDs, and the chip dutifully clocking out bits at the correct rate. It’s the perfect start to an LED clock project, an Iron Man arc reactor (are we still doing those?), or just random blinkey LEDs stuffed into a wearable.

Thanks [Martyn] for sending this one in.