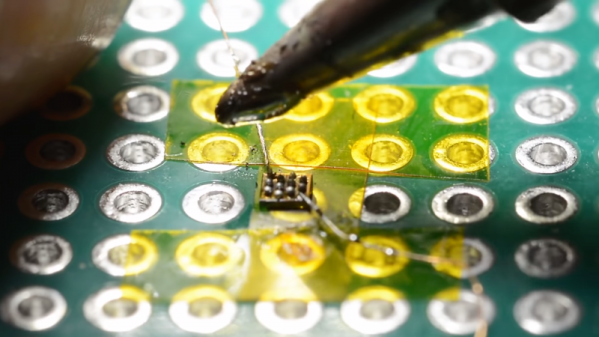 It’s said that the electronic devices we use on a daily basis, particularly cell phones, could be so much smaller than they are if only the humans they’re designed for weren’t so darn big and clumsy. That’s only part of the story — battery technology has a lot to do with overall device size — but it’s true that chips can be made a whole lot smaller than they are currently, and are starting to bump into the limit of being able to handle them without mechanical assistance.

Or perhaps not, if [mitxela]’s hand-soldering of a tiny ball-grid array chip is any guide. While soldering wires directly to a chip is certainly a practical skill and an impressive one at that, this at least dips its toe into the “just showing off” category. And we heartily endorse that. The chip is an ATtiny20 in a WLCSP (wafer-level chip-scale package) that’s a mere 1.5 mm by 1.4 mm. The underside of the chip has twelve tiny solder balls in a staggered 4×6 array with 0.4 mm pitch. [mitxela] tackled the job of soldering this chip to a 2.54-mm pitch breakout board using individual strands from #30 AWG stranded wire and a regular soldering iron, with a little Kapton tape to hold the chip down. Through the microscope, the iron tip looks enormous, and while we know the drop of solder on the tip was probably minuscule we still found ourselves mentally wiping it off as he worked his way across the array. In the end, all twelve connections were brought out to the protoboard, and the chip powers up successfully.

We’re used to seeing [mitxela] work at a much larger scale, like his servo-plucked music box or a portable Jacob’s Ladder. He’s been known to get small before though, too, like with these tiny blinkenlight earrings.

END_OF_DOCUMENT_TOKEN_TO_BE_REPLACED 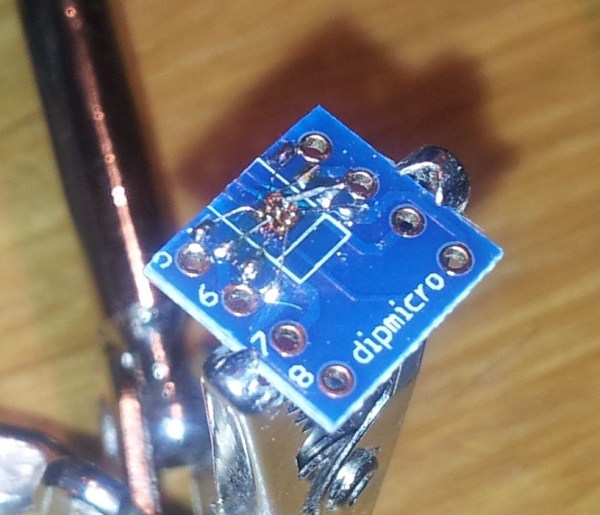 And here we’ve been complaining about Flat Pack No-Lead chips when this guy is prototyping with Ball Grid Array in a Wafer-Level Chip Scale Package (WLCSP). Haven’t heard that acronym before? Neither had we. It means you get the silicon wafer without a plastic housing in order to save space in your design. Want to use that on a breadboard. You’re crazy!

Eh, that’s just a knee jerk reaction. The wafer-level isn’t that unorthodox as far as manufacturing goes. It’s something like chip on board electronics which have that black blob of epoxy sealing them after the connections are made. This image shows those connections which use magnet wire on a DIP breakout board. [Jason] used epoxy to glue the wafer down before grabbing his iron. It took 90 minutes to solder the nine connections, but his second attempt cut that process down to just 20. After a round of testing he used more epoxy to completely encase the chip and wires.

It works for parts with low pin-counts. But add one row/column and you’re talking about making sixteen perfect connections instead of just nine.