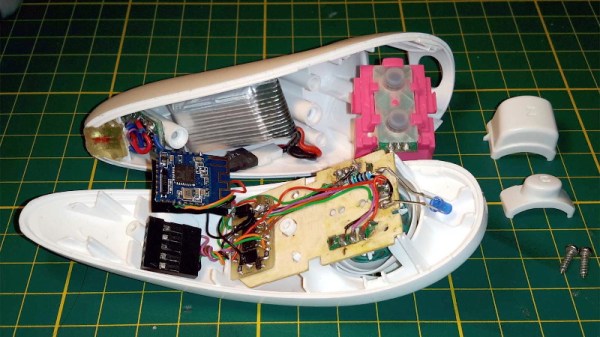 With the Wii’s unique controller, Nintendo not only provided new gaming experiences to players, but gave hardware hackers a platform for experimentation that’s still going strong. Case in point, this modification of a third party Wii “Nunchuk” by [Giliam de Carpentier] that turns the accessory into a stand-alone wireless controller powered by a ATtiny44A.

It turns out there’s a considerable amount of free space inside the Nunchuk case, so [Giliam] found adding in the new hardware wasn’t nearly as difficult as you might expect. Of course, it helps that the diminutive SMD ATtiny44A and its support hardware are housed on a very neatly milled PCB that attaches to the back of the original board.

Most of the other hardware comes in the form of modular components, like the  Bluetooth transmitter and TP4056 charge controller for the 300 mAh battery. A micro USB charging port is mounted where the original Nunchuk cable entered the case, making the whole thing look very professional.

Even if you aren’t interested in making your own controller, [Giliam] covers many interesting topics in this write-up such as handling different methods of Bluetooth connectivity and various power management techniques to eke out as much life from the relatively small battery as possible. It’s not only a fascinating read, but a great example of what thorough project documentation should look like.

In the past we’ve seen Bluetooth conversions for the Wii Nunchuck, but traditionally they left the original electronics in place. On the other side of the spectrum, we’ve also seen the internals get replaced with something as powerful as the Raspberry Pi Zero.

END_OF_DOCUMENT_TOKEN_TO_BE_REPLACED 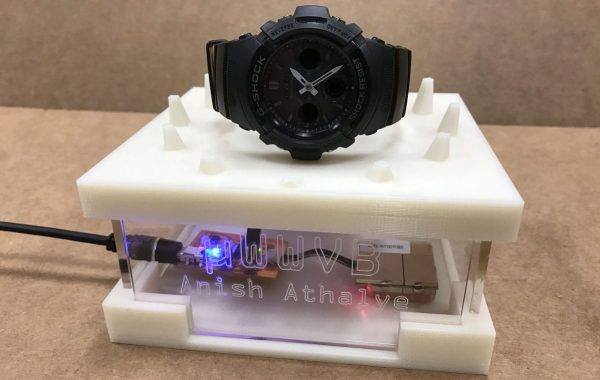 The US National Institute of Standards and Technology (NIST) broadcasts atomic clock time signals from Fort Collins, Colorado on various frequencies. The WWVB signal on 60 kHz blasts out 70,000 watts that theoretically should reach the entire continental US. Unfortunately for [Anish Athalye], the signals do not reach his Massachusetts dorm, so he built this GPS to WWVB converter to keep his Casio G-Shock self-setting watch on track.

Not a repeater but a micro-WWVB transmitter, [Anish]’s build consists of a GPS receiver module and an ultra low-power 60kHz transmitter based on an ATtiny44a microcontroller’s hardware PWM driving a ferrite rod antenna. It’s not much of a transmitter, but it doesn’t need to be since the watch is only a few inches away. That also serves to keep the build in compliance with FCC regulations regarding low-power transmissions. Heavy wizardry is invoked by the software needed to pull time data off the GPS module and convert it to WWVB time code format, with the necessary time zone and Daylight Savings Time corrections. Housed in an attractive case, the watch stand takes about three minutes to sync the watch every night.

[Anish] offers some ideas for improving the accuracy, but we think he did just fine with this build. We covered a WWVB signal spoofer before, but this build is far more polished and practical. 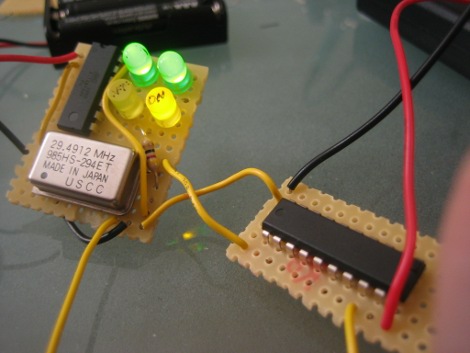 If there is one thing we like, it’s a fellow hacker so enthusiastic about his or her work that they write the article practically for us by including as much detail and information as possible.

In this two part hack, [Scott] wrote in to let us know not only about a high school built high altitude balloon, but also his $5 long range RF transmitter. The former is simply GPS and video data logged over the flight, but [Scott’s] specialty comes in the latter. A 74HC240 octal buffer is using to amplify the signal (Morse code) from an ATTiny44a with a 29MHz oscillator, producing a usable signal as far away as 200 miles.

It is low bandwidth, but if you’re looking for a simple transmitter in your project and need something with more power (and a smaller package), this might be the ticket.