With the Wii’s unique controller, Nintendo not only provided new gaming experiences to players, but gave hardware hackers a platform for experimentation that’s still going strong. Case in point, this modification of a third party Wii “Nunchuk” by [Giliam de Carpentier] that turns the accessory into a stand-alone wireless controller powered by a ATtiny44A.

It turns out there’s a considerable amount of free space inside the Nunchuk case, so [Giliam] found adding in the new hardware wasn’t nearly as difficult as you might expect. Of course, it helps that the diminutive SMD ATtiny44A and its support hardware are housed on a very neatly milled PCB that attaches to the back of the original board.

Most of the other hardware comes in the form of modular components, like the  Bluetooth transmitter and TP4056 charge controller for the 300 mAh battery. A micro USB charging port is mounted where the original Nunchuk cable entered the case, making the whole thing look very professional.

Even if you aren’t interested in making your own controller, [Giliam] covers many interesting topics in this write-up such as handling different methods of Bluetooth connectivity and various power management techniques to eke out as much life from the relatively small battery as possible. It’s not only a fascinating read, but a great example of what thorough project documentation should look like.

In the past we’ve seen Bluetooth conversions for the Wii Nunchuck, but traditionally they left the original electronics in place. On the other side of the spectrum, we’ve also seen the internals get replaced with something as powerful as the Raspberry Pi Zero.

END_OF_DOCUMENT_TOKEN_TO_BE_REPLACED

The Wii controller will likely go down in history as the hacker’s favorite repurposed input device, and there’s no question that the Raspberry Pi is the community’s top pick in terms of Linux single board computers. So it should come as little surprise that somebody has finally given us the cross-over episode that the hacking community deserves: the PiChuk, a Pi Zero inside of Nintendo’s motion-sensing “nunchuk”. 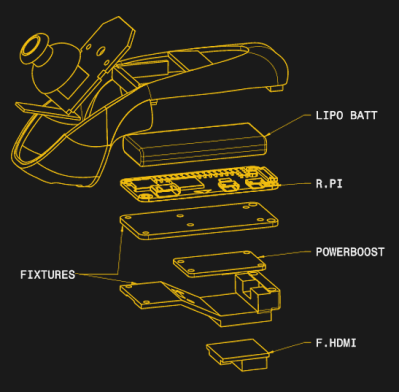 Veterans of Wii Sports might be wondering how the hero of our story, a hacker by the name of [keycaps], managed to pull off such a feat. The Pi Zero is small, but it’s not that small. The trick is that the case of the nunchuk has been extended by way of a new 3D printed bottom half.

There’s more than just a Pi Zero along for the ride, as well. [keycaps] has manged to sneak in a 750 mAh LiPo and an Adafruit Powerboost, making the device a completely self-contained system. Interestingly, the original nunchuk PCB remains more or less untouched, with just a couple of wires connected to the Pi’s GPIO ports so it can read the button and stick states over I2C.

We know you’re wondering why [keycaps] went through the trouble of breaking out the HDMI port on the bottom. It turns out, the PiChuk is being used to drive a Vufine wearable display; think Google Glass, but without the built-in computing power. The analog stick and motion sensing capabilities of the controller should make for a very natural input scheme, as far as wearable computers go.

So not only could the PiChuk make for an awesome wireless input device for your next project, it’s actually a pretty strong entry into the long line of wearable computing devices based on the Pi. Usually these have included a DIY version of the distinctive Google Glass display, but offloading that onto a commercially available version is certainly a lot easier. Furries: is there nothing they cannot do? Well okay, “shower” remains an elusive concept, but wearable technology seems to be in, as evidenced by this robotic mood tail. [Wei-Chieh Tseng]’s adorable Arduino-driven fashion accessory operates either via Wii Nunchuk or a set of RFID cards tagged with specific emotions to depict.

Details are scant. It appears to have been a project for a physical computing or design class. One thing’s for certain: Halloween is going to be awesome.