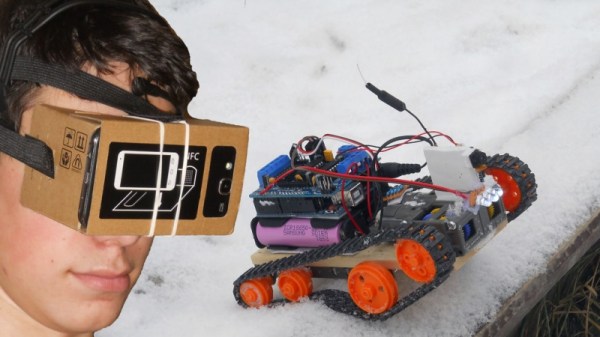 [Imetomi] found himself salvaging a camera from a broken drone when he decided to use it in a new project, a tracked robot with a live video feed from the mounted camera.

… I had a cheap Chinese drone that was broken, but its camera seemed to be operating and when I took apart my drone I found a small WiFi chip with a video transmitter. I (decided) that I will use this little circuit for a project and I started to buy and salvage the parts.

Being a tracked robot, it can negotiate most types of terrain and climb hills up to 40 degrees. It is powered by two 18650 lithium-ion batteries with a capacity of 2600 mAh and the remote control is based on the HC-12 serial communication module. You can control it with a joystick and watch the camera’s live-stream in a virtual reality glass. That’s pretty neat but it’s not all.

[Imetomi] also used a hacked Nacomimi Brainwave Toy to make a brain controlled version of his robot. The brainwaves are detected using sensors placed on the scalp. To actually control it the operator has to focus on the right hand to move right, focus on the left hand to move left, blink to move forward and blink again to stop. There is also an ultrasonic sensor to help navigation so the robot doesn’t bump into things. It’s not very precise but you can always build the joystick version or, even better, make a version with both controls.

END_OF_DOCUMENT_TOKEN_TO_BE_REPLACED The AutoNOMOS labs project has found a new way to maneuver its vehicles, your brain. We have looked at a previous version that uses a mostly computerized van under remote control from an iPhone. This one however, named “Brain Driver”, places the operator in the driver’s seat with an EEG strapped to their head.

Going for a more sporty look, the current vehicle is a drive-by-wire Volkswagen Passat wagon filled to the brim with fun toys like LIDAR/ RADAR sensor technology, cameras, and a specialized GPS. The EEG interface is a commercially available Emotiv model, and after a few rounds of training on safe ground, the driver is placed in control of the car.

In one demonstration the car approaches a 4 way intersection, the driver only has to think left or right and the car (intelligently) navigates the turn after coming to a proper stop, and checking for obstacles. In the second demo car and driver are let loose on an unused airport to test responsiveness.

If you like brains, cars, robots, and spinning lasers join us after the break for a video.

END_OF_DOCUMENT_TOKEN_TO_BE_REPLACED

When we hear about a brain controlled Arduino project we immediately think about a coding nightmare. As always, the simple hacks are the best hacks. [Joel] and [Akshay] used hardware from a kid’s game as a brain interface for an Arduino.

We came across the video (embedded after the break) of their work and asked for more info on what we thought was an incredibly difficult hack. It turns out they purchased Uncle Milton’s Force Trainer which uses a headset to measure brain waves and has a base unit that reacts to these measurements. Hacking into this device didn’t require reverse engineering of anything. They took the easy route, and tapped into the five LEDs on the base unit. As the game measures greater levels of concentration, it lights up more LEDs.

So far tapping into the game is just a proof of concept. It’s up to you to implement a brain controlled beer bot.