Well, this is embarrassing! Imagine sending a multibillion-dollar rover to an ancient lakebed on Mars only to discover after a year of poking around at the rocks that it might not actually have been a lake after all. That seems to be the impression of Jezero Crater that planetary scientists are forming after looking at the data coming back from Perseverance since it nailed the landing in what sure as heck looked like a dried-up lake, complete with a river delta system. A closer look at the sediments Perseverance has been sampling reveals a lot of the mineral olivine, which on Earth is rare near the surface because it readily reacts with water. Finding lots of olivine close below the surface of Jezero suggests that it either wasn’t all that watery once upon a time, or that what water was there was basically ice cold. The results are limited to where the rover has visited, of course, and the nice thing about having wheels is that you can go somewhere else. But if you were hoping for clear signs that Jezero was once a lake teeming with life, you might have to keep waiting.

In other space news, we have to admit to taking NASA to task a bit in the podcast a couple of weeks back for not being quite up to SpaceX’s zazzle standards with regard to instrumenting the SLS launch. Yeah, a night launch is spectacular, but not having all those internal cameras like the Falcon has just sort of left us flat. But we should have been more patient, because the images coming back from Artemis 1 are simply spectacular. We had no idea that NASA attached cameras to the solar panels of the Orion spacecraft, which act a little like selfie sticks and allow the spacecraft to be in the foreground with Earth and the Moon in the background. Seeing Earth from lunar distance again for the first time in 50 years has been a real treat, and getting our satellite in the frame at the same time is a huge bonus.

END_OF_DOCUMENT_TOKEN_TO_BE_REPLACED 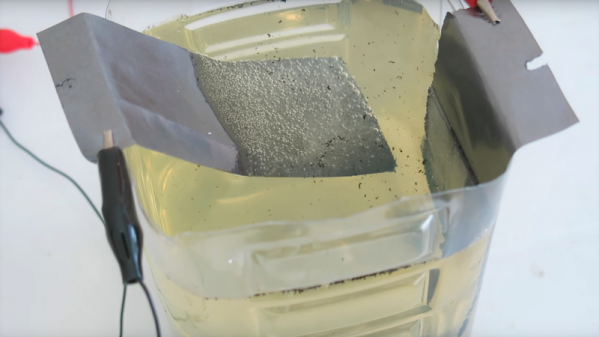 Graphene is an interesting material, but making enough of the stuff to do something useful can be a little tough. That’s why we’re always on the lookout for new methods, like this electrochemical process for producing graphene in bulk.

You probably know that graphene is a molecular monolayer of carbon atoms linked in hexagonal arrays. Getting to that monolayer is a difficult proposition, but useful bits of graphene can be created by various mechanical and chemical treatments of common graphite. [The Thought Emporium]’s approach to harvesting graphene from graphite is a two-step process starting with electrochemical exfoliation. Strips of thin graphite foil are electrolyzed in a bath of ferrous sulfate, resulting in the graphite delaminating and flaking off into the electrolyte. After filtering and cleaning, the almost graphene is further exfoliated in an ultrasonic cleaner. The result is gram quantity yields with very little work and at low cost.

There’s plenty of effort going into new methods of creating graphene these days, whether by barely controlled explosions or superheating soybean oil. But will graphene be the Next Big Thing? The jury is still out on that.

END_OF_DOCUMENT_TOKEN_TO_BE_REPLACED

Non-planar layer Fused Deposition Modeling (FDM) is any form of fused deposition modeling where the 3D printed layers aren’t flat or of uniform thickness. For example, if you’re using mesh bed leveling on your 3D printer, you are already using non-planar layer FDM. But why stop at compensating for curved build plates? Non-planar layer FDM has more applications and there are quite a few projects out there exploring the possibilities. In this article, we are going to have a look at what the trick yields for us.