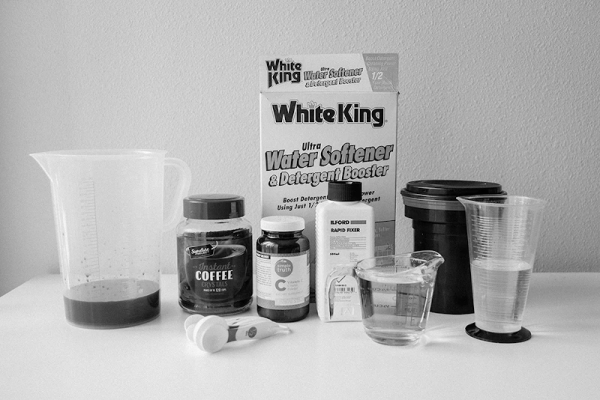 Years ago, doing your own darkroom work was the only way to really control what your pictures looked like. In those days, coffee was what kept you going while you mixed another batch of noxious chemicals in the dark and fumbled to load a tank reel by feel. But did you know that you can process black and white film with coffee? Not just coffee, of course. [Andrew Shepherd] takes us through the process using what is coyly known as Caffenol-C.

Apparently, the process is not original, but if you’ve ever wanted to do some film developing and don’t want exotic and dangerous chemicals, it might be just the ticket. The ingredients are simple: instant coffee, washing soda, water and –optionally — vitamin C powder. If nothing else, all of this is safe to pour down your drain, something you probably aren’t supposed to do with conventional developers that contain things like formaldehyde and methyl chloroform.

END_OF_DOCUMENT_TOKEN_TO_BE_REPLACED

At the 2009 Ghana Maker Faire, [Pat Delany] met a young carpentry student that saved for three months to buy a cheap Chinese wood plane. He was confounded by this distribution of resources, so [Pat] created the Concrete Lathe project that aims to get useful machine tools out to where they’re needed most.

The idea for concrete machine tools came out of the US involvement in World War I. America had been staunchly isolationist before committing to the war, and production of arms did not match the needed output. A man named L.I. Yeomans came up with the idea of building concrete lathes to produce artillery shells for the war effort.

There’s a ton of documentation on the concrete lathe wiki like the bed instructions torn from the pages of Ikea instructions, and the thread follower. While they’re still a lot of work and testing to be done, giving some manufacturing capability to those who need it most is a pretty noble cause.

Thanks [Rob] for sending this one in.