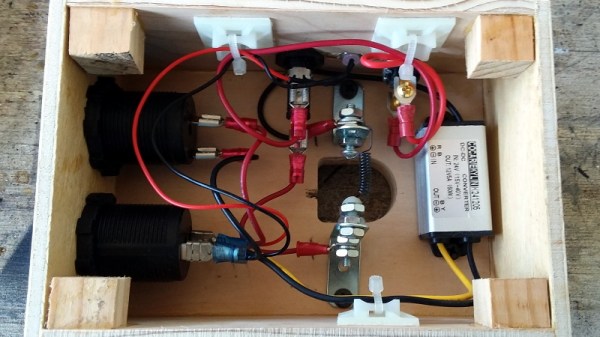 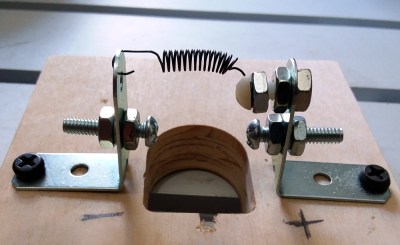 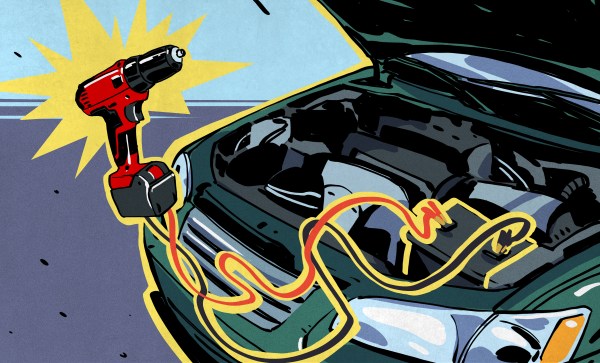 Sometimes, you move to a new city, and things just aren’t going your way. You’re out of cash, out of energy, and thanks to your own foolishness, your car’s battery is dead. You need to jump-start the car, but you’re feeling remarkably antisocial, and you don’t know anyone else in town you can call. What do you do?

It’s not a problem, because you’re a hacker and you have a cordless drill in the back seat of your car. The average drill of today tends to run on a nice 18 volt lithium battery pack. These packs are capable of delivering large amounts of current and can take a lot of abuse. This is where they come in handy.

Typically, when jump starting a car, another working vehicle is pulled into place, and the battery connected in parallel with the dead battery of the disabled vehicle. Ideally, the working vehicle is then started to enable its alternator to provide charge to the whole system to avoid draining its own battery. At this point, the disabled vehicle can be started and its alternator can begin to recharge its own battery. After disconnecting everything, you’re good to go.

END_OF_DOCUMENT_TOKEN_TO_BE_REPLACED 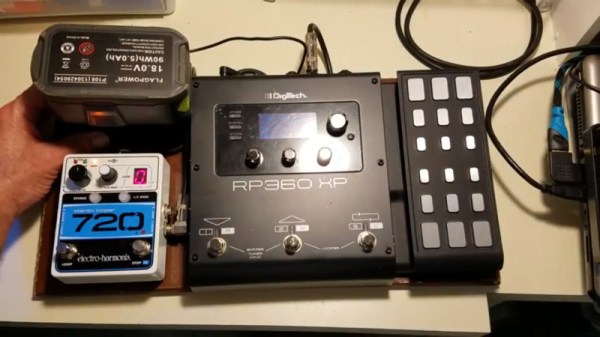 Guitar pedals are a great way to experiment with the sound of your instrument. However, they require electricity, and when you’re using more than a couple, it can get messy. Some will run on batteries, while others are thirstier for more current and will only work with a plugback. There are a great many solutions out there, but most people with more than a few pedals to power will end up going to some kind of mains powered solution. [Don] is here to show us that it’s not the only way.

Mains power is great for some things, but where pedals are concerned, it’s not always perfect. There are issues with noise, both from cheap power supplies and poorly designed pedals, and it means you’re always hunting for a power socket, which is limiting for buskers.

[Don] realised that the common drill battery is a compact source of clean, DC power, and decided to use that to power his rig. By slapping together a drill battery with a pre-assembled buck converter and a 3D printed adapter, he was able to build a portable power supply for his pedals. Thanks to the fact that the vast majority of pedals use 9V DC with the same input jack design, it’s a cinch to wire up. With an appropriately sized buck converter, a drill battery could supply even a hefty pedalboard for a significant period of time.

Overall, it’s a great hack that solves a problem faced by many performing musicians. We’ve seen our fair share of guitar pedals around Hackaday – perhaps you’d like to see how one makes it from concept to production?