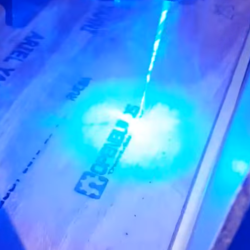 If you’ve got a dedicated computer running EMC2 for CNC control you may be interested in these keyboard labels. [Rich] mentions that they use the labels for their engraver at the Connecticut Hackerspace. Just print them out and glue them in the face of the keys.

Dev board seminars and freebies

[Mike] wrote in to tell us STM is giving away samples of the STM32 F3 Discovery again. But you can also get in on some free seminars. One is an online webinar for TI’s Launchpad family, the other is for the F3 Discovery board and is being held all around the US.

[Johan] didn’t want to use batteries for the light on the microscope he uses when working with SMT parts. He added a few components with let him power the device from USB instead.

Here’s an MSP430 using Fast Fourier Transform for signal processing. There’s very little explanation, but apparently this collection of FFT related material was used heavily in the project. [via Reddit]

If you’re looking for a new office game you might consider Cell Racr. It pits your cellphone’s vibrating motor against everyone else’s. Just place the phone on an incline and repeatedly dial its number to advance toward the finish line.

END_OF_DOCUMENT_TOKEN_TO_BE_REPLACED

We love CNC hacks, so when [Jonny] sent in his nearly complete CNC router we were ecstatic. There are only a couple of posts thus far, and it takes some digging, but its pretty easy to understand his mindset and overall plan while making the CNC. It currently has full 3 axis movement and he replaced the previously dinky Harbor Freight Dremel with a much more powerful DeWalt that even Tim Taylor would be proud of. Software side of things he uses a combination of EMC2 and their collection of open source CAM codes. The project is coming along nicely and more updates are promised. Check out some more videos after the break. END_OF_DOCUMENT_TOKEN_TO_BE_REPLACED