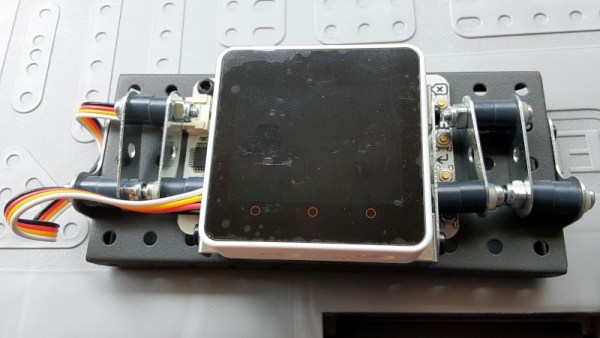 While it would be a mistake to think there are any firm rules for what constitutes a cyberdeck, we can at least identify some common traits that would seem to give us a baseline description. For example, most deck builds we’ve seen have been fully-functional Linux computers, more often than not powered by some Raspberry Pi variant. But that doesn’t mean there isn’t room in the community for less computational powerful decks, or builds that are so bespoke that they can only perform a few selected tasks. 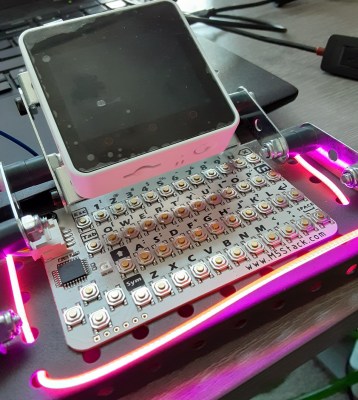 As a perfect example, take a look at the RPG Character Tracker from [Melissa Matos]. You won’t find a Raspberry Pi here, nor a full operating system. Instead, we’ve got a M5Stack Core2 and an I2C CardKB Mini Keyboard wrapped up in a foldable frame made from Erector Set pieces. Add in a little LED lighting for that cyberpunk feel, and the stage is set.

So what does this diminutive build do? Well, apparently nothing right now. [Melissa] just got the hardware together and has only recently started aligning all the 1s and 0s to do her bidding. But what it’s supposed to do is clear enough: it’s intended to be an electronic companion to complex RPG tabletop games to help with things such as character creation. Sounds like it will also have a “roll dice” mode that will save you the trouble of having to crawl under the table when one of your D20s goes rogue.

While such a device could be useful for many different games, it should come as no surprise to hear that [Melissa] is currently targeting the cyberpunk Shadowrun.

Although we were particularly taken with the online tool that let you generate 3D printed organizers for all your tabletop gaming needs, we’d definitely rather have digital companions like this which would make those plastic baggies full of parts obsolete. 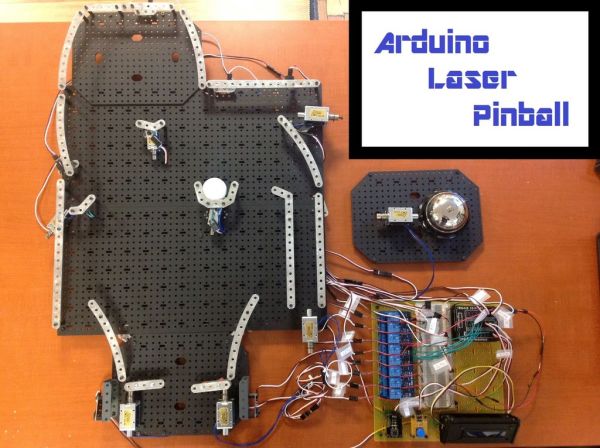 Have you ever wanted to roll your own pinball machine? It’s one of those kinds of builds where it’s easy to go off the deep end. But if you’re just getting your feet wet and want to mess around with different playfield configurations, start with something like [joesinstructables]’ Arduino Laser Pinball.

It’s made from meccano pieces attached with standoffs, so the targets are easy to rearrange on the playfield. [joesinstructables] wanted to use rollover switches in the targets, but found that ping pong balls are much too light to actuate them. Instead, each of the targets uses a tripwire made from a laser pointing at a photocell. When the ping pong ball enters the target, it breaks the beam. This triggers a solenoid to eject the ball and put it back into play. It also triggers an off-field solenoid to ring a standard front-desk-type bell one to three times depending on the target’s difficulty setting.

The flippers use solenoids to pull the outside ends of levers made from meccano, which causes the inside ends to push the ball up and away from the drain. Once in a while a flipper will get stuck, which you can see in the demo video after the break. An earlier version featured an LCD screen to show the score, but [joesinstructables] can’t get it to work for this version. Can you help? And do you think a bouncy ball would actuate a rollover switch?

This isn’t the first pinball machine we’ve covered. It’s not even the first one we’ve covered that’s made out of meccano. Here’s an entire Hacklet devoted to ’em. And remember when an Arduino made an old table great again?

END_OF_DOCUMENT_TOKEN_TO_BE_REPLACED 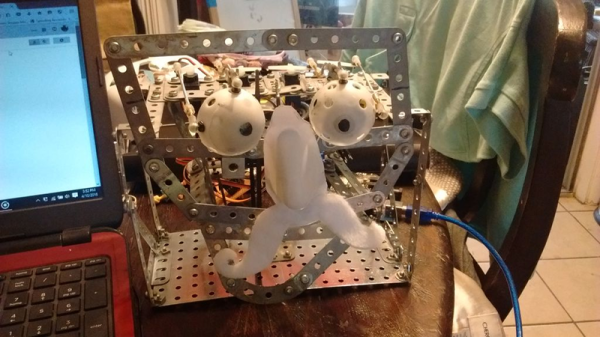 If you are doing a senior design project in engineering school, it takes some guts to make a robotic duplicate of the school’s president. He or she might be flattered, or completely offended. Us? We laughed out loud. Check out the video below. Spoiler: the nose/moustache wiggle at the end kills us every time.

The project uses a variety of parts including a plastic mask, an Erector set, and the obligatory Arduino with an MP3 shield. There are many articulated parts including eyes, nose, mouth, and wiggly moustache. The face uses RC servos, although [gtoombs] says he’d use stepper motors next time for smoother motion.