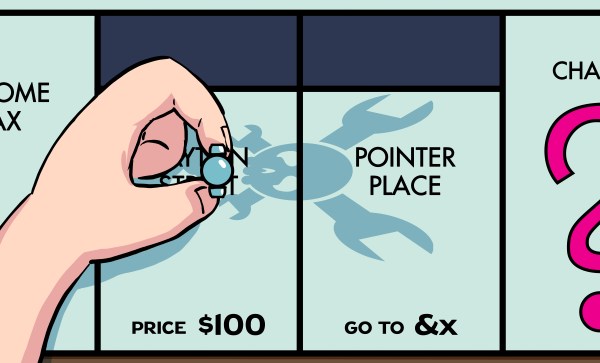 In the first part of this series, we covered the basics of pointers in C, and went on to more complex arrangements and pointer arithmetic in the second part. Both times, we focused solely on pointers representing data in memory.

But data isn’t the only thing residing in memory. All the program code is accessible through either the RAM or some other executable type of memory, giving each function a specific address inside that memory as entry point. Once again, pointers are simply memory addresses, and to fully utilize this similarity, C provides the concept of function pointers. Function pointers provide us with ways to make conditional code execution faster, implement callbacks to make code more modular, and even provide a foothold into the running machine code itself for reverse engineering or exploitation. So read on!

In general, function pointers aren’t any more mysterious than data pointers: the main difference is that one references variables and the other references functions. If you recall from last time how arrays decay into pointers to their first element, a function equally decays into a pointer to the address of its entry point, with the () operator executing whatever is at that address. As a result, we can declare a function pointer variable fptr and assign a function func() to it: fptr = func;. Calling fptr(); will then resolve to the entry point of function func() and execute it.

Admittedly, the idea of turning a function into a variable may seem strange at first and might require some getting used to, but it gets easier with time and it can be a very useful idiom. The same is true for the function pointer syntax, which can be intimidating and confusing in the beginning. But let’s have a look at that ourselves.

END_OF_DOCUMENT_TOKEN_TO_BE_REPLACED

Raindrops on roses, and whiskers on kittens. They’re ok, but state machines are absolutely on our short list of favorite things.

There are probably as many ways to implement a state machine as there are programmers. These range from the terribly complex, one-size-fits-all frameworks down to simply writing a single switch...case block. The frameworks end up being a little bit of a black box, especially if you’re just starting out, while the switch...case versions are very easy to grok, but they don’t really help you write clear, structured code.

In this extra-long edition of Embed with Elliot, we’ll try to bridge the middle ground, demonstrating a couple of state machines with an emphasis on practical coding. We’ll work through a couple of examples of the different ways that they can be implemented in code. Along the way, we’ll Goldilocks solution for a particular application I had, controlling a popcorn popper that had been hacked into a coffee roaster. Hope you enjoy.