There’s a VMWare problem that’s being exploited in the wild, according to the NSA (PDF). The vulnerability is a command injection on an administrative console. The web host backing this console is apparently running as root, as the vulnerability allows executing “commands with unrestricted privileges on the underlying operating system.”

The wrinkle that makes this interesting is that VMWare learned about this vuln from the NSA, which seems to indicate that it was a zero-day being used by a foreign state. The compromise chain they list is also oddly specific, making me suspect that it is a sanitized account of observed attacks.

Microsoft Teams, And the Non-CVE

[Oskars Vegeris] found a pair of interesting problems in the Microsoft Teams client, which together allows an interactionless, wormable RCE. The first vuln is an XSS problem, where a message containing a “mention” can be modified in transit to include arbitrary Javascript. To get that JS past the XSS protection filter, a unicode NULL byte is included in the payload. The second vuln is using the built-in file download code in the Teams app to download and auto-run a binary. Put together, anyone who simply loads the message in their Teams app runs the code.

Vegeris points out that since so many users have a presence in multiple rooms, it would be trivial to use this exploit to build a worm that could infect the majority of Teams users worldwide. The bug was reported privately to Microsoft and fixed back in October. A wormable RCE in a widely used tool seems like a big deal, and should net a high CVE score, right? Microsoft gave two ratings for this attack chain, for the two versions of Teams that it can affect. For the Office365 client, it’s “Important, Spoofing”, which is about as unimportant as a bug can be. The desktop app, at least, was rated “critical” for an RCE. The reason for that seems to be that the sandbox escape only works on the standalone desktop app.

But no CVE was issued for the exploit chain. In the security community, collecting CVEs is an important proof of work for your resume. Microsoft replied that they don’t issue CVEs for products that get updated automatically without user interaction. Kerfuffle ensued. END_OF_DOCUMENT_TOKEN_TO_BE_REPLACED

An issue was discovered in libarchive through Google’s ClusterFuzz project. Libarchive is a compression and decompression library, widely used in utilities. The issue here is how the library recovers from a malformed archive. Hitting an invalid header causes the memory in use to be freed. The problem is that it’s possible for file processing to continue even after that working memory has been freed, leading to all kinds of problems. So far an actual exploit hasn’t been revealed, but it’s likely that one is possible. The problem was fixed back in May, but the issue was just announced to give time for that update to percolate down to users.

Of note is the fact that this issue was found through Google’s fuzzing efforts. Google runs the oss-fuzz project, which automatically ingests nightly builds from around 200 open source projects and runs ClusterFuzz against them. This process of throwing random data at programs and functions has revealed over 14,000 bugs.
END_OF_DOCUMENT_TOKEN_TO_BE_REPLACED

Everyone has at least a few games on their computer, and I would assume most of the Hackaday readership would be among the enlightened PC gamer bretheren. At this year’s DEF CON, [Tamas Szakaly] gave a talk about the data these games leak to the Internet, the data they accept from the Internet, and what you can do with that data.

[Tamas]’ talk was entirely about scripting games, like the many games that are scriptable in Lua, or Valve’s Squirrel. Developers have thought about this before and have implemented sandboxes and many anti-cheat mechanisms. However, because these sandboxes are poorly implemented, it’s easy to get outside the game and do some real damage.

[Tamas]’ first target was Crysis 2 and the CryEngine3. This game uses a Lua scripting engine and has no sandbox whatsoever. That means [Tamas] can call os.execute, and from there the entire game is over. Or it’s just begun. Either way you look at it, it’s pretty bad.

CryTek notwithstanding, [Tamas] can also use games with Lua scripting that have a real sandbox. DOTA2 has a leaky sandbox and can be used to call OS I/O routines and execute base 64 encoded executables right over the main executable.

The most impressive example of script abuse in various multiplayer games is from Garry’s Mod. This game has custom implementation of dangerous functions, restricted file IO, and a proper Lua sandbox. This was a wise decision from the developers, but the library is huge. If you create a map or mode used on a server, you can have a full HTTP proxy to the gamer’s home network. During the talk, [Tamas] used this exploit to display an image from a webcam on a Garry’s Mod server. It was on the podium right next him, but this could have been done on a server on the other side of the planet.

END_OF_DOCUMENT_TOKEN_TO_BE_REPLACED 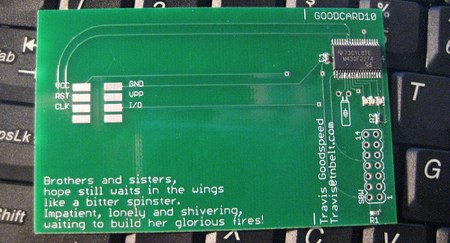 Here’s a quick prototype from [Travis Goodspeed]. It’s a smart card built around an MSP430 microcontroller. We’ve used the MSP430 in the past because of its low power demands. He says this business card currently supports 1.8V to 3.3V, but a future design will have 5V as well. Technologies like Java Card exist for running applets on smart cards, but a familiar microcontroller like the MSP430 could certainly make development much faster. Knowing [Travis], there’s a reader somewhere about to go through some serious fuzzing.

[I)ruid] from BreakingPoint Labs has been doing quite a bit of protocol reverse engineering as part of his work. He put together a post covering some of the tools that have been useful for this task. Text-based protocols have a lot of human readable characters that can help you identify fields. Binary protocols don’t have this luxury though. He recommends the Protocol Informatics Project for tackling these situations. It applies bioinformatics algorithms to network traffic. You give it a packet dump of the protocol and it compares them to find similarities the same way genetic sequences are compared. It can be confused by protocols that waste a lot of space, but it’s still a very clever approach to reversing.

Which is a better method for finding vulnerabilities, fuzzing or static-code analysis? The question will be put to the test at next month’s Black Hat USA conference, where two experienced hackers security researchers will be given a piece of mystery code and one hour to find all the vulnerabilities they can using one of the two methods. [Charlie Miller] from Independent Security Evaluators will use fuzzing and [Sean Fay] from Fortify Software will use static-code analysis to detect the vulnerabilities in the code. We reported on [Miller]’s fuzzing talk while at Toorcon 9.

The pair will be allowed to use their own equipment, but they won’t see the code until the moment the showdown begins. For an added bit of fun, conference attendees are welcome to join in the contest. The audience member who finds the most exploits within the hour wins a free dinner at a new Las Vegas restaurant. But you don’t have to wait until then to weigh in; go ahead and post your thoughts on fuzzing vs. static-code analysis in the comments, just be ready to back up your claims.