END_OF_DOCUMENT_TOKEN_TO_BE_REPLACED

[Renaud] built a AC power meter from scratch. While commercial power meters like the Kill A Watt are available [Renaud’s] build gives an interesting insight into the methods used. 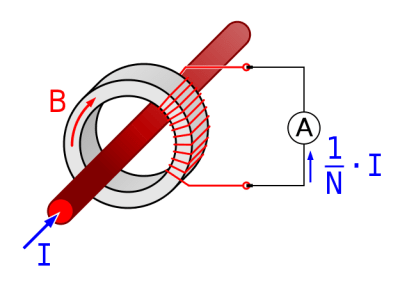 At the heart of [Renaud’s] design lie two sense transformers. The first is a typical voltage stepdown transformer. This brings the AC line voltage down to +/- 10V, which is more amenable to digital sampling. The second is a current sense transformer. In current transformers the primary is typically a single wire (the AC line in this case) passing through the middle of a ring (see the picture to the right from wikipedia). The secondary is wrapped round the ring. When the secondary coil is shorted a current in the primary wire/coil induces a current in the secondary coil.

In practice, the voltage drop across a low value resistor is used to detect the current in the secondary. Clamp meters use this principle to make non-contact current measurements. Other power meters often use hall effect sensors for current measurements. It will be interesting to see how these methods compare when [Renaud] benchmarks this build.

[Renaud] takes the voltage and current readings from these transformers and samples them with a PIC in order to calculate power. As the AC voltage is periodic [Renaud] uses a method similar to Equivalent Time Sampling (ETS) to combine waveforms from multiple cycles and increase the effective sample rate.

In a world filled with 3D printed this and CNC machined that, it’s always nice to see someone who still does things the old-fashioned way. [Headquake137] built a radio controlled truck body (YouTube link) from wood and polystyrene using just a saw, a Dremel, a hobby knife, and a lot of patience. This is one of those builds that blurs the lines between scale model and sculpture. There aren’t too many pickup trucks one might call “iconic” but if we were to compile a list, the 6th generation Ford F-series would be on it. [Headquake137’s] model is based on a 1977 F100. 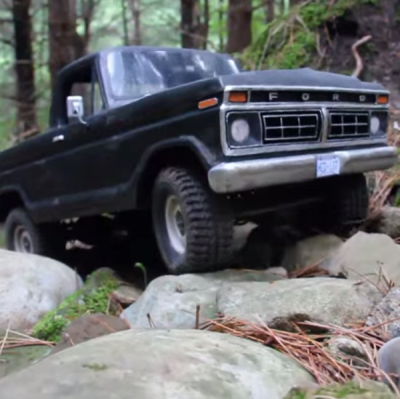 The build starts with the slab sides of the truck. The basic outline is cut into a piece of lumber which is then split with a handsaw to create a left and a right side. From there, [Headquake137’s] uses a Dremel to carve away anything that doesn’t look like a 1977 F100. He adds pieces of wood for the roof, hood, tailgate, and the rest of the major body panels. Small details like the grille and instrument panel are created with white polystyrene sheet, an easy to cut material often used by train and car modelers.

When the paint starts going on, the model really comes to life. [Headquake137] weathers the model to look like it’s seen a long life on the farm. The final part of the video covers the test drive of the truck, now mounted to a custom chassis. The chassis is designed for trails and rock crawling, so it’s no speed demon, but it sure does look the part riding trails out in the woods!

[Headquake137] managed to condense what must have been a 60 or 70 hour build down to a 14 minute video found below.

END_OF_DOCUMENT_TOKEN_TO_BE_REPLACED

Everyone has at least a few games on their computer, and I would assume most of the Hackaday readership would be among the enlightened PC gamer bretheren. At this year’s DEF CON, [Tamas Szakaly] gave a talk about the data these games leak to the Internet, the data they accept from the Internet, and what you can do with that data.

[Tamas]’ talk was entirely about scripting games, like the many games that are scriptable in Lua, or Valve’s Squirrel. Developers have thought about this before and have implemented sandboxes and many anti-cheat mechanisms. However, because these sandboxes are poorly implemented, it’s easy to get outside the game and do some real damage.

[Tamas]’ first target was Crysis 2 and the CryEngine3. This game uses a Lua scripting engine and has no sandbox whatsoever. That means [Tamas] can call os.execute, and from there the entire game is over. Or it’s just begun. Either way you look at it, it’s pretty bad.

CryTek notwithstanding, [Tamas] can also use games with Lua scripting that have a real sandbox. DOTA2 has a leaky sandbox and can be used to call OS I/O routines and execute base 64 encoded executables right over the main executable.

The most impressive example of script abuse in various multiplayer games is from Garry’s Mod. This game has custom implementation of dangerous functions, restricted file IO, and a proper Lua sandbox. This was a wise decision from the developers, but the library is huge. If you create a map or mode used on a server, you can have a full HTTP proxy to the gamer’s home network. During the talk, [Tamas] used this exploit to display an image from a webcam on a Garry’s Mod server. It was on the podium right next him, but this could have been done on a server on the other side of the planet.

END_OF_DOCUMENT_TOKEN_TO_BE_REPLACED

Guitar effects and other musical circuits are a great introduction to electronics. There’s a reason for this: with audio circuits you’re dealing with analog signals and not just the ones and zeros of blinking a LED. Add in the DSP aspects of audio effects, and you have several classes of an EE degree wrapped up in one project.

For his Hackaday Prize entry, [randy.day] is building a guitar multieffect. Instead of just a single distortion, fuzz, or chorus circuit, this tiny little PCB is going to have several flavors of pitch shifting, a flanger, chorus, echo, harmony, and stranger ‘digital-ish’ effects like bitcrushing.

This effects unit is built around a PIC32 and a TI audio codec which processes the audio at 64k 32-bit samples/second. This takes care of all the audio processing, but the hard work for a guitar pedal is actually the enclosure and mechanicals – it’s a hard life for stage equipment. For the foot pedal input, [randy] is using a magnetic position sensor, but there’s no word if he’ll be using a fancy die-cast enclosure or a plastic injection molded unit.