GPS is available on most smart phones, which is all well and good unless you drive out into a place with weak service. Unless you want to go into the before-time and buy a standalone GPS (and try to update the maps every so often) or go even further back and print out MapQuest directions, you’ll need another solution to get directions. Something like this project which sends Google Maps directions over SMS.

The project is called RouteMe by [AhadCove]. It runs on a Raspberry Pi at his home which is constantly monitoring an email inbox. Using Google Voice to forward incoming text messages as emails to the Pi, the system works when your phone has a cell signal but no data connection. The Pi listens for specific commands in that SMS-to-Email connection and is able to send directions back to the phone via text message. That’s actually a neat hack you may remember from the olden days where you can send email as SMS using the phone number as the address.

If you find yourself lost in the woods with just your phone often enough, [AhadCove] has all of the code and detailed directions on how to set this up on his GitHub site. But don’t discount this particular task, anything you can script on the Pi can now be controlled via SMS without relying on a service like Twilio.

This maps hack is a pretty ingenious solution to a problem that more than a few of us have had, and it uses a lot of currently-available infrastructure to run as well. If you want another way of navigating without modern tech, have a go at dead reckoning in a car.

END_OF_DOCUMENT_TOKEN_TO_BE_REPLACED

The recipient of the Google hive-mind transplant was one of three wireless FM intercoms [MisterM] scored for a measly £4. Looking much as they did when they were the must-have office tool or home accessory for your modern mid-80s lifestyle, the intercom case was the perfect host for the Pi and the Google AIY hat. Only the case was used — not even the original speaker made it into the finished product. The case got a good scrubbing, a fresh coat of paint to perk up the gone-green plastic, and an accent strip of Google’s logo colors over the now-deprecated station selector switch. [MisterM] provided a white LED behind the speaker grille for subtle feedback. A tap of the original talk bar gets Google’s attention for answers to quick questions, and integration into the family’s existing home automation platform turns the lights on and off. See it in action after the break.

[MisterM] was lucky enough to score an AIY hat for free, and as far as we know they’re still hard to come by. If you’re itching to try out the board, fear not — turns out you can roll your own.

END_OF_DOCUMENT_TOKEN_TO_BE_REPLACED 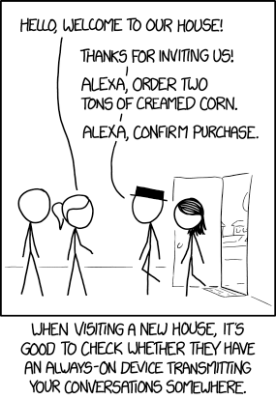 END_OF_DOCUMENT_TOKEN_TO_BE_REPLACED

Firefighters and firehouses are not as glamorous as your kindergarten self would lead you to believe. Most firefighters in the US are volunteers, and most firefighters don’t live in the firehouse. Instead of hanging out at the fire house all the time, they use a call-in system that displays a list on a web page saying, ‘Joe is coming to the fire house’ or ‘Jack will meet you at the scene’. It’s highly efficient given the budgets they’re working with, but as [Andy] discovered, this same system can be replicated with Google Voice.

The system relies on a Google Voice account that’s set to have all calls go straight to voicemail. The missed call sends off a voicemail notification to the Gmail inbox, effectively turning the Gmail inbox into a call-in system for free.

In testing, [Andy] noticed the Gmail inbox doesn’t quite refresh fast enough for his purposes, so he whipped up a simple webpage with a little bit of PHP to parse the emails and display everything automatically. The idea being that this webpage could just be displayed on a monitor in the station, waiting for the next call.

Another improvement [Andy] points out could be setting up several numbers, each for different status codes. It’s an astonishing simple system, and now something that can be replicated for free.