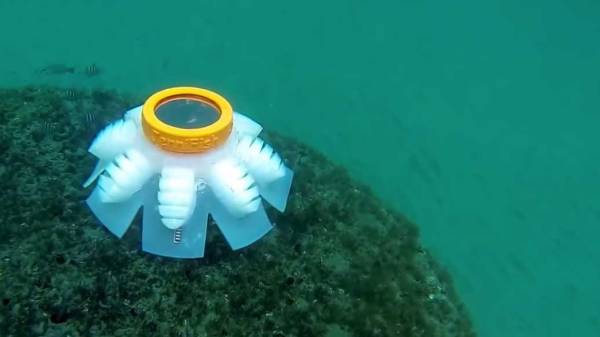 In a recent paper in Bioinspiration & Biomimetics, researchers at Florida Atlantic University describe the process of building and testing five free-swimming soft robotic jellyfish. The paper contains build details and data on how three different variables – tentacle stiffness, stroke frequency, and stroke amplitude – affect the swimming characteristics of each bot. For a more in-depth build log, we found the original masters thesis by Jennifer Frame to be very thorough, including processes, schematics, parts lists, and even some Arduino code.

Though a landlubber may say the robots look more like a stumpy octopus than a jellyfish, according to the paper the shape is actually most similar to a juvenile “ephyra stage” moon jellyfish, with 8 short tentacles radiating from a central body. The flexible tentacles are made of a silicon rubber material from Smooth-On, and were cast in 3D printed molds. Inside the waterproof main body is a Teensy 3.2 microcontroller, some flash memory, a nine-axis IMU, a temperature sensor, and a 9 V battery.

There are two flexible resistors embedded in the body to measure tentacle flex, and the actual flexing is done by pumping seawater through open circuit hydraulic channels cast into the tentacles. Two 3 V mini pumps are sufficient for pumping, and the open circuit means that when the pumps turn off, the tentacles bleed off any remaining pressure and quickly snap back to their “neutral” position without the use of complicated valves.

Another simple feature is two hall effect sensors that were mounted in the body to enable waterproof “wireless communication” with the microcontroller. The wireless protocol of choice: manually waving magnets over the sensors to switch the robot between a few predefined operating modes.

There’s a soothing, atmospheric video after the break, where you can see the robots in action off the coast of Florida.

END_OF_DOCUMENT_TOKEN_TO_BE_REPLACED

How could you build an artificial tadpole? Or simulate the motion of a cilium? Those would be hard to do with mechanical means — even micromechanical because of their fluid motion. Researchers have been studying shape-programmable matter: materials that can change shape based on something like heat or magnetic field. However, most research in this area has relied on human intuition and trial and error to get the programmed shape correct. They also are frequently not very fast to change shape.

[Metin Sitti] and researchers at several institutions have found a way to make rapidly changing silicone rubber parts (PDF link) that can change shape due to a magnetic field. The method is reproducible and doesn’t seem out of reach for a hackerspace or well-equipped garage lab.

END_OF_DOCUMENT_TOKEN_TO_BE_REPLACED

Mount an umbrella to a drone and there you go, you have a flying umbrella. When [Alan Kwan] tried to do just that he found it wasn’t quite so simple. The result, once he’d worked it out though, is haunting. You get an uneasy feeling like you’re underwater watching jellyfish floating around you.

A grad student in MIT’s ACT (Art, Culture and Technology) program, [Alan’s] idea was to produce a synesthesia-like result in the viewer by having an inanimate object, an umbrella, appear as an animate object, a floating jellyfish. He first tried simply attaching the umbrella to an off-the-shelf drone. Since electronics occupy the center of the drone, the umbrella had to be mounted off-center. But he discovered that drones want most of their mass in the center and so that didn’t work. With the help of a classmate and input from peers and faculty he made a new drone with carbon fiber and metal parts that allowed him to mount the umbrella in the center. To further help with stability, the batteries were attached to the very bottom of the umbrella’s pole.

In addition to just making them fly, [Alan] also wanted the umbrella to gently undulate like a jellyfish, slowly opening and closing a little. He tried mounting servo motors inside the umbrella for the task. These turned out to be too heavy, but also unnecessary. Once flying outside at just the right propeller speed, the umbrellas undulated on their own. Watch them doing this in the video below accompanied by haunting music that makes you feel you’re watching a scene from Blade Runner.

END_OF_DOCUMENT_TOKEN_TO_BE_REPLACED RoboJelly is certainly not what we’re used to seeing when it comes to robots. Instead of a cold metallic skeleton, this softie is modeled after jellyfish which have no bones. But that’s not the only thing that’s unusual about it. This robot also doesn’t carry its own power source. It gets the energy needed for locomotion from the water around it.

Artificial muscles are what give this the movement seen in the clip after the break. These muscles react to heat, and that heat is produced through a chemical reaction. The construction method starts with the muscle material, which is then covered in carbon nanotubes, and finally coated with black platinum dust. Sounds a bit like witchcraft, huh (Eye of newt, dragon heart string, etc.)? We certainly don’t have the chemistry background to understand how this all works. But we are impressed. So far it doesn’t have the ability to change direction, the flexing of all of the muscle material happens at the same time. But the next step in their research will be finding a way to route the “fuel” to give it some direction.

This brings another jellyfish-inspired robot to mind. Check out FESTO’s offering which flies through the air with the greatest of ease.