When it comes to 3D printers, most machines you’ll see are pretty small. The Ultimaker, Prusa, Lulzbot, and the Rostock Max are desktop devices. While they have entirely usable build volumes, you’re not printing furniture with these machines. Yes, large format 3D printers exist, like the SeeMeCNC Part Daddy (they’ll build you one for ~$90,000, IIRC), a house printer that uses concrete, and a number of very large printers from various other manufacturers with very high price tags.

There is no 3D printer designed to print large objects without spending tens of thousands of dollars on a machine. That’s the focus of this Hackaday Prize entry. [RigTig]’s Big 3D Printer is designed to be big, but also inexpensive.

A big, inexpensive 3D printer can’t use the usual machine setups seen in other large format printers. Big machines with traditional kinematics demand big pieces of aluminum, counterweights, and a design that might spiral out of control. Instead of a thousand pounds of metal, [RigTig] is using something like the Skycam system seen at every NFL game; put a few towers up at the corners of a triangle, run some string or cable through some pulleys, and you have a simple, light movement platform.

With the machine side of the problem figured out, the next question is what material to use. [RigTig] has decided plastic filament is impractical because of cost. A clay extrusion system has a lot of problems. Concrete is a good idea, but the prints would weigh several tons. Right now, [RigTig] is planning on using dirt with a polymer binder. It’s an interesting idea, and one we haven’t seen elsewhere.

Building a 3D printer from scratch is easy. Building a huge 3D printer is one of the most interesting engineering challenges out there. Not only do you need a motion platform that can make it work, but you also need to print in a material that is cheap enough and prints fast enough for the printer to make sense. We don’t know if [RigTig] is on the right track yet, but we’re glad to see him put in the effort for this excellent addition to the Hackaday Prize. 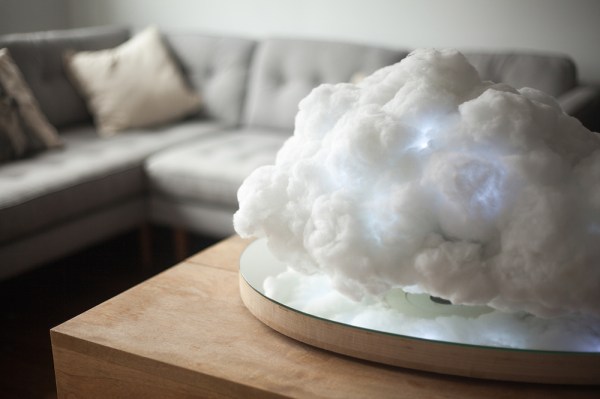 Ever feel overwhelmed by the sheer amount of usable surface area in your house? Ever wish that your Bluetooth speaker was fluffier? Do you ever long for a future in which all your music is accompanied by perfectly timed light flashes. Is the gentle passing of a cumulus cloud across a bright blue sky the only thing that will keep the voices at bay? We might have the speaker for you.

Joking aside the effect is pretty cool. It’s a standard levitation doohickey at it core. While we don’t know what the inside looks like exactly, we can take our guesses. The cloud has some magnets and a coil for receiving power. Inside is a hacked apart Bluetooth speaker, a microcontroller, and some LEDs. It’s all surrounded by fluffy white pillow stuffing and hot glue.

The base has a power supply and a rechargeable battery. We’re not sure why, we suppose it’s a pain to reset the floaty cloud. It’s certainly not portable. If you’d like one, it can probably be replicated with a few challenging weekends of work. The other option is to wait, as they claim to be pursuing a commercial something or another. Which these days means they’re gonna file for a patent on something everyone and their grandmother has done and then sell it as a six thousand dollar desk ornament. Still! Pretty cool. Video after the break.

END_OF_DOCUMENT_TOKEN_TO_BE_REPLACED

When a job can be handled with a microcontroller, [devttys0] likes to buck the trend and build a circuit that requires no coding. Such was the case with this “Clapper”-inspired faux-AI light controller, which ends up being a great lesson in analog design.

The goal was to create a poor man’s JARVIS – something to turn the workshop lights on with a free-form vocal command. Or, at least to make it look that way. This is an all-analog circuit with a couple of op amps and a pair of comparators, so it can’t actually process what’s being said. “Aziz! Light!” will work just as well as any other phrase since the circuit triggers on the amplitude and duration of the spoken command. The AI-lite effect comes from the clever use of the comparators, RC networks to control delays, and what amounts to an AND gate built of discrete MOSFETs. The end result is a circuit that waits until you finish talking to trigger the lights, making it seems like it’s actually analyzing what you say.

We always enjoy [devttys0]’s videos because they’re great lessons in circuit design. From block diagram to finished prototype, everything is presented in logical steps, and there’s always something to learn. His analog circuits that demonstrate math concepts was a real eye-opener for us. And if you want some background on the height of 1980s AI tech that inspired this build, check out the guts of the original “Clapper”.

END_OF_DOCUMENT_TOKEN_TO_BE_REPLACED

[Moris Metz] is a hacker in Berlin who has a bi-weekly national radio spot. (Only in Germany!) This week, he connected the ubiquitous ESP8266 to a nice old (physical) bell for his broadcast over the weekend. (i”Translated” here.) Check out the video teaser embedded below.

END_OF_DOCUMENT_TOKEN_TO_BE_REPLACED 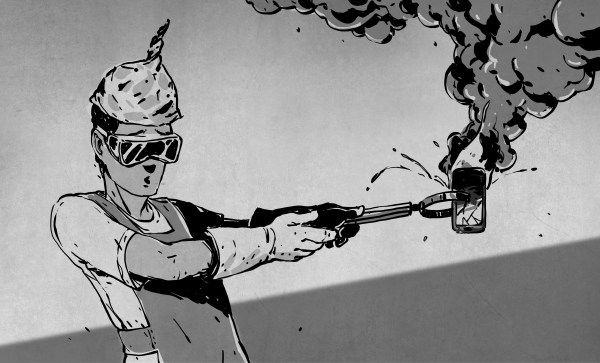 END_OF_DOCUMENT_TOKEN_TO_BE_REPLACED

The Raspberry Pi Zero is small enough that it could almost be mistaken for a USB gadget, rather than a standalone computer. Maybe that was the inspiration that drove [Novaspirit] to completely “donglify” his Zero.

This is a great convenience hack if you’ve got a Zero just kicking around. With minimal soldering, he converted the Zero’s onboard female USB jacks into a male USB plug. From there on out, it’s all software, and the video (embedded below) takes you through all the steps on Windows.