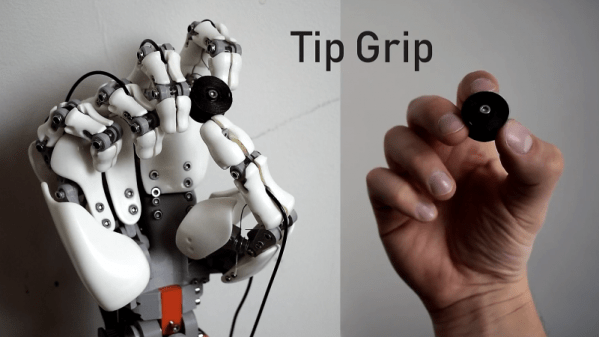 Behold the wondrous complexity of the human hand. Twenty-seven bones working in concert with muscles, tendons, and ligaments extending up the forearm to produce a range of motions that gave us everything from stone tools to symphonies. Our hands are what we use to interface with the physical world on a fine level, and it’s understandable that we’d want mechanical versions of ourselves to include hands that were similarly dexterous.

That’s a tall order to fill, but this biomimetic mechatronic hand is a pretty impressive step in that direction. It’s [Will Cogley]’s third-year university design project, which he summarizes in the first video below. There are two parts to this project; the mechanical hand itself and the motion-capture glove to control it, both of which we find equally fascinating. The control glove is covered with 3D-printed sensors for each joint in the hand. He uses SMD potentiometers to measure joint angles, with some difficulty due to breakage of the solder joints; perhaps he could solve that with finer wires and better strain relief.

The hand that the glove controls is a marvel of design, like something on the end of a Hollywood android’s arm. Each finger joint is operated by a servo in the forearm pulling on cables; the joints are returned to the neutral position by springs. The hand is capable of multiple grip styles and responds fairly well to the control glove inputs, although there is some jitter in the sensors for some joints.

The second video below gives a much more detailed overview of the project and shows how [Will]’s design has evolved and where it’s going. Anthropomorphic hands are far from rare projects hereabouts, but we’d say this one has a lot going for it.

END_OF_DOCUMENT_TOKEN_TO_BE_REPLACED 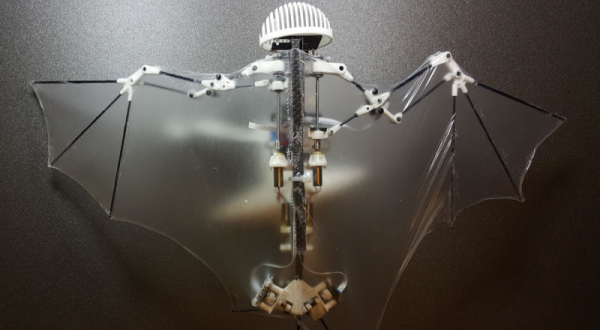 How would you like a bat bot for your next pet drone? Researchers from the University of Illinois at Urbana-Champaign’s Coordinated Science Laboratory and from the California Institute of Technology, created a bat drone. This is not your regular drone; it’s not a styrofoam, bat-shaped, four-propeller kind of drone. It’s a drone that mimics not only the shape but the movement of the bats wings to achieve flight.

The biomimetic robotic platform, dubbed Bat Bot B2, is an autonomous flying robot. The wing mechanics are controlled by a brushless DC motor for the wing flapping along with four wings actuators to provide linear motion that allows the wings to further change shape in flight. The wings are made of a 56-micron, silicone-based membrane (thinner than an average condom), which for sure helps with their elasticity as well as reducing overall weight, which is only 93 grams.

The bat has only made twenty flights so far, ranging up to 30 meters with some rough landings. It’s not much yet, but the prototype looks pretty slick. We covered another bat bot back in 2012 but the original information is no longer available, and we don’t know what happened to that project. There was also no video. In contrast, you can watch Bat Bot B2 glide.

END_OF_DOCUMENT_TOKEN_TO_BE_REPLACED