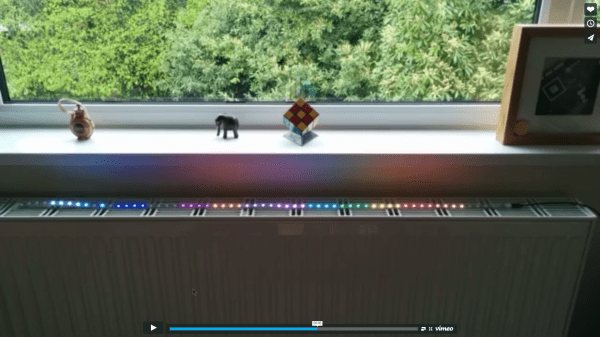 [James] is a frequent user of the London Underground, a subway system that is not immune to breakdowns and delays. He wanted a way to easily tell if any of the trains were being disrupted, and thanks to some LEDs, he now has that information available at a glance without having to check a webpage first.

Inspired by the Blinky Tape project at FT Engineering, [James] thought he could use the same strip of addressable LEDs to display information about the tube. A Raspberry Pi B+ gathers data from the London Underground’s TfL API and does a few calculations on the data. If there is a delay, the LEDs in the corresponding section of the strip will pulse, alerting the user to a problem with just a passing glance.

The project is one of many that displays data about the conditions you’ll find when you step outside the house, without having to look at a computer or smartphone. We recently featured an artistic lamp which displays weather forecasts for 12 hours into the future, and there was an umbrella stand which did the same thing. A lot is possible with LEDs and a good API!

END_OF_DOCUMENT_TOKEN_TO_BE_REPLACED 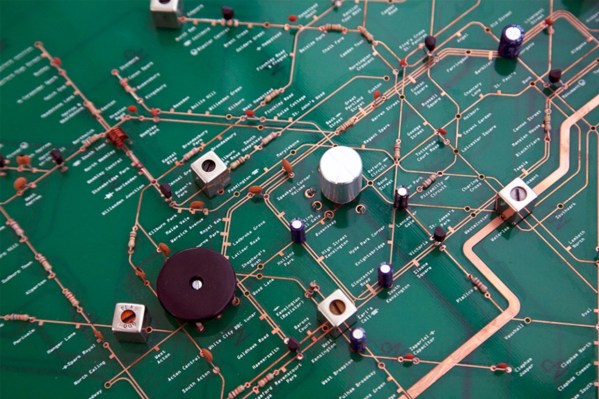 Sometimes, awesomeness passes us by and we don’t notice it until a while later. This is from 2012, but it’s so friggin’ insane we just have to cover it even if it’s late. Yuri Suzuki is an installation artist who designed the Tube Map Radio and Denki Puzzles.

The Tube Map Radio is inspired by a diagram created by the original designer of the London Tube map, Harry Beck, which shows the lines and stations of the London Underground rail network as an annotated electrical circuit. Iconic landmarks on this map are represented by components relating to their functions, including a speaker where Speaker’s Corner sits, battery representing Battersea Power Station and Piccadilly Circus marked as Piccadilly Circuit. The work was commissioned by the Design Museum London, and the PCB layout was done by Masahiko Shindo (Shindo Denki Sekkei). The idea was to bring the electronics out of the “black box” and not just display it, but to have it laid out in a fashion that people could try to understand how it really works.

The other project called Denki Puzzles is equally remarkable. It’s a kit meant to teach electronics, using a set of snap-fit components. But instead of having all “bricks” or units of the same shape, the Denki Puzzles are a collection of printed circuit board pieces whose form indicate a particular function. Fit the pieces together as a sort of physical circuit diagram and you’ll be able to build working electronics. For example, the LED unit looks like a 8 pointed star, and the resistance unit looks like a resistance symbol. Check out some pictures and a video after the break