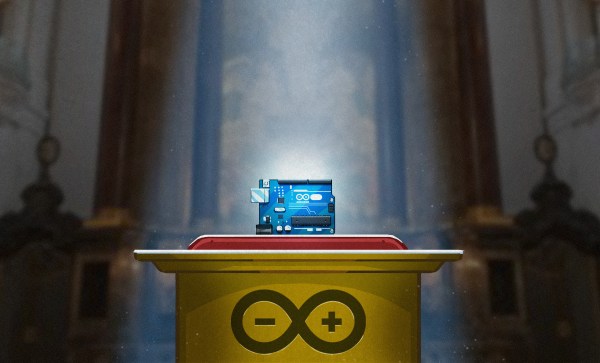 Federico Musto, who until two days ago owned the largest part of Arduino AG has been bought out, having today been replaced by a combination of Massimo Banzi and Fabio Violante.

This should bring to a close the saga that began with a fork where two companies called themselves “Arduino” and bizarrely continued for almost a year after the reconciliation of the two was announced. What remains today is one corporation called Arduino AG, now captained by Massimo Banzi as Chairman and CTO, and Fabio Violante as CEO.

Massimo Banzi was one of the original founders of Arduino and one side of the trademark litigation during the period in which there were two companies. With the buyout of Musto, Banzi moves back to the top spot. This change in leadership occurred as a company called BCMI bought all shares of Arduino AG. BCMI was started by four of the original Arduino co-founders; you could say the old gang rides again.

Arduino AG is in essence a hardware company, manufacturing and selling the officially branded Arduino boards. But right now they still maintain the official codebase which most people see as belonging to the community. Despite changes at the top, the proof will still be in the pudding. When will we see the Arduino Foundation come to life and take control of the Arduino IDE? Hackaday will continue to look into it and provide updates.

END_OF_DOCUMENT_TOKEN_TO_BE_REPLACED

I caught up with [Massimo Banzi] at the Shenzhen Maker Faire to talk about manufacturing in China, the current and future of Arduino, and how recent events may shape the Open Hardware landscape.

The big news from Arduino at SZMF is a new partnership with Seeed Studio to manufacture theGenuino. This is an official Arduino board manufactured in China for the Chinese market. Knowing that the board is official and connected to the founders is key point to get makers to adopt this hardware. [Massimo] makes a good point about the ideal of “Proudly Made in China” which I could see as a selling point for the burgeoning maker market there. This may be a growing principle in China, but in an ocean of clone boards it sounds like a tough path forward. On the other hand, their booth was mobbed with people putting in new orders.

[Massimo] belives the current Arduino strife has actually served to move the project forward. He cites the schism between arduino.cc and arduino.org for catalyzing manufacturing partnerships with both Adafruit Industries and Seeed Studios. This has resulted in official Arduino hardware that is not made only in Italy, but made in the region the hardware will be used; NYC for US orders, Shenzhen for China orders.

Our discussion wraps up with a plea from [Massimo] for the Hackaday community to be a little less fickle about projects using Arduino. That one makes me chuckle a bit!

Back in 2005, the Arduino was just a twinkle in they eyes of [Massimo Banzi] and the other core developers. Since then, you can’t go to any electronics site without hitting something beginning with ‘ard~’ or ending with ‘~duino’. The platform has become so popular, people everywhere are piggybacking on the name to the point of trademark infringement or simply outright counterfeiting one of the many official Arduino boards. Now [Massimo] has something to say about these clones, ripoffs, derivatives, and ‘duino-compatible boards.

On the list of things bad for the open source ecosystem, [Massimo] points to direct clones of existing Arduino boards. While these boards are electrically identical to officially licensed boards, they simply don’t support the Arduino project financially and usually don’t contribute to the existing libraries and code. Even worse are counterfeits; these boards copy the trademarks of the Arduino project – sometimes terribly given the three examples above (guess which one is the real one) – and directly profit off of the Arduino project without giving any support in return.

There are other veins of Arduino that [Massimo] considers more acceptable. Arduino-compatible boards, seen by the dozen over on Kickstarter, usually add something of their own, be it a radio chip, or an entirely different microcontroller. Derivatives, like Teensy and Adafruit’s Flora actually bring new things to the table with improved hardware and new and interesting libraries.

As far as counterfeits and clones go, we can’t agree more with what [Massimo] has to say. You have to admire the folks in the Arduino project being so open about their creations and admiring the Arduino derivatives that bring some new hardware to the table. Then again, that’s the lesson of the Arduino project; you can make hardware open source and still be outrageously popular.

The latest generation of Arduino hardware has been released. The Arduino Duemilanove (2009 in Italian) has the same form factor as previous generations. The specs are essentially identical to the Diecimila, but there have been a few changes to the hardware. The power source is no longer chosen using a jumper. A MOSFET and dual OPAMP have been added to the board to automatically selected between USB power and the external plug. Automatic hardware resets are optional now. Next to the USB port are two solder pads labeled RESET-EN. Cut the trace between them to kill the reset. If you ever want it back, just bridge the pads. The hardware was updated to correspond with the release of Arduino cofounder [Massimo Banzi]’s new book.