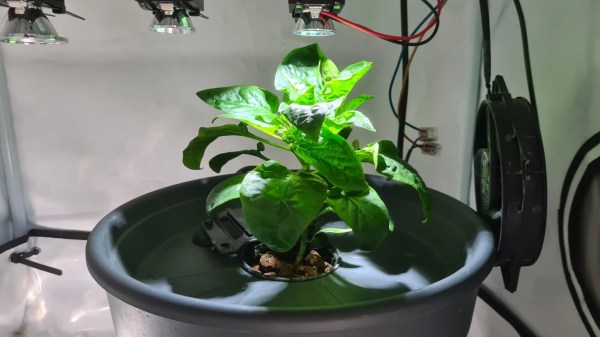 Hydroponic systems are an increasingly popular way to grow plants indoors using a minimum of resources. Even some commercial farming operations are coming online using hydroponic growing techniques, as these methods consume much less water, land area, and other resources than traditional agricultural methods. The downside is that the required lighting systems often take an incredible amount of energy. That’s why [ColdDayApril] set up a challenge to grow a plant hydroponically using no more than a single watt.

The system is set up to grow a single pepper plant in what is known as a deep-water culture, where the plant is suspended in a nutrient solution which has everything it needs to grow. The lightning system is based around the Samsung LM301B which comes close to the physical limits for converting electricity into white light and can manage around 220 lumens. A special power supply is needed for these low-power diodes, and the light is efficiently directed towards the plant using a purpose-built reflective housing. By placing this assembly very close to the plant and adjusting it as it grows, [ColdDayApril] was able to take the pepper plant from seed to flowering in 92 days.

It’s worth noting that the rest of the system uses a little bit of energy too. A two watt fan helps circulate some air in the hydroponic enclosure, and deep-water systems usually require an air pump to oxygenate the water which uses another two watts. This is still an impressive accomplishment as most hobbyist builds use lighting systems rated in the hundreds of watts and use orders of magnitude more energy. But, if you’re willing to add some fish into the system you can mitigate some of the energy requirements needed for managing the water system even further. 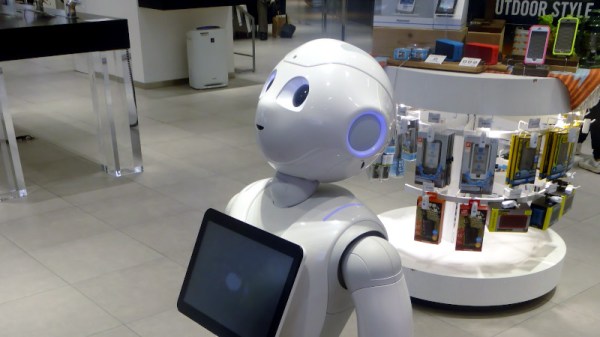 Earlier this week it was widely reported that Softbank’s friendly-faced almost-humanoid Pepper robot was not long for this world, as the Japanese company’s subsidiary in France that had been responsible for the robotic darling of the last decade was being downsized, and that production had paused. Had it gone the way of Sony’s Aibo robotic puppy or Honda’s crouching-astronaut ASIMO? It seems not, because the company soon rolled back a little and was at pains to communicate that reports of Pepper’s untimely death had been greatly exaggerated. It wasn’t so long ago that Pepper was the face of future home robotics, so has the golden future become a little tarnished? Perhaps it’s time to revisit our plastic friend.

A Product Still Looking For A Function

Pepper made its debut back in 2014, a diminutive and child-like robot with basic speech recognition and conversation skills, the ability to recognize some facial expressions, and a voice to match those big manga-style eyes. It was a robot built for personal interaction rather than work, as those soft tactile hands are better suited to a handshake than holding a tool. It found its way into Softbank stores as well as a variety of other retail environments, it was also used in experiments to assess whether it could work as a companion robot in medical settings, and it even made an appearance as a cheerleading squad. It didn’t matter that it was found to be riddled with insecurities, it very soon became a favourite with media tech pundits, but it remained at heart a product that was seeking a purpose rather than one ready-made to fit a particular function.

I first encountered a Pepper in 2016, at the UK’s National Museum of Computing. It was simply an exhibit under the watchful eye of a museum volunteer rather than being used to perform a job, and it shared an extremely busy gallery with an exhibit of Acorn classroom computers from the 1980s and early ’90s. It was an odd mix of the unexpected and the frustrating, as it definitely saw me and let me shake its hand but stubbornly refused to engage in conversation. Perhaps it was taking its performance as a human child seriously and being shy, but the overwhelming impression was of something that wasn’t ready for anything more than experimental interaction except via its touch screen. As a striking contrast in 2016 the UK saw the first release of the Amazon Echo, a disembodied voice assistant that might not have had a cute face but which could immediately have meaningful interactions with its owner.

How Can A Humanoid Robot Compete With A Disembodied Voice?

In comparing the Pepper with an Amazon Echo it’s possible that we’ve arrived at the root of the problem. Something that looks cool is all very well, but without immediate functionality, it will never capture the hearts of customers. Alexa brought with it the immense power of Amazon’s cloud computing infrastructure, while Pepper had to make do with whatever it had on board. It didn’t matter to potential customers that a cloud-connected microphone presents a huge privacy issue, for them a much cheaper device the size of a hockey puck would always win the day if it could unfailingly tell them the evening’s TV schedule or remind them about Aunty’s birthday.

Over the next decade we will see the arrival of affordable and compact processing power that can do more of the work for which Amazon currently use the cloud. Maybe Pepper will never fully receive that particular upgrade, but it’s certain that if Softbank don’t do it then somebody else will. Meanwhile there’s a reminder from another French company that being first and being cute in the home assistant market is hardly a guarantee of success, who remembers the Nabaztag? 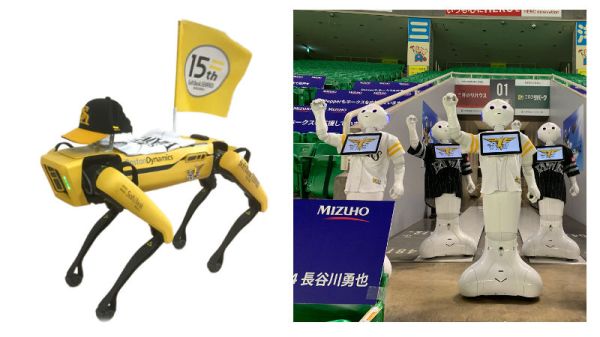 Grand venues of spectacle to entertain audiences has long been a part of history, but such tradition is highly problematic at the moment in the light of the pandemic. Some sports leagues are testing the waters with a soft restart by playing only to a broadcast audience, leaving the stadium empty. Many experiments are in progress trying to liven up an empty stadium and this is where SoftBank saw an opportunity: as a multinational conglomerate that has both a baseball team and a robotics division, they called a team of robots to cheer-leading duty.

Some clips of the cheerleading squad in action have started circulating. A few people may greet the sight with an indifferent shrug, but most tend to fall to an extreme: either finding them hilarious or react with horror. It is only natural to have a strong reaction to such a jarring sight.

Spot was only available for sale recently, and we admit this was not the type of task that came to our minds. Pepper has a longer track record and this is not Pepper’s first baseball game. The humanoid robot has been around long enough to raise questions about a robot’s role in society from unionization to sex work. We haven’t made much progress answering those questions, and now we have even more questions that the lightweight SoftBank Robotics press release (in Japanese) didn’t try to answer.

When people fret about “robots taking our jobs” the conversation doesn’t usually involve sports team cheerleaders, yet here we are. Welcome to the future.

END_OF_DOCUMENT_TOKEN_TO_BE_REPLACED 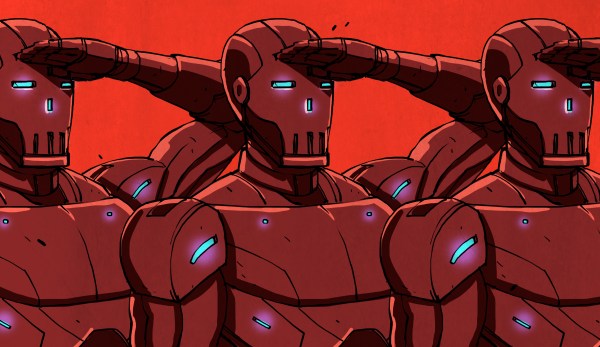 For the first time, a robot has been unionized. This shouldn’t be too surprising as a European Union resolution has already recommended creating a legal status for robots for purposes of liability and a robot has already been made a citizen of one country. Naturally, these have been done either to stimulate discussion before reality catches up or as publicity stunts. 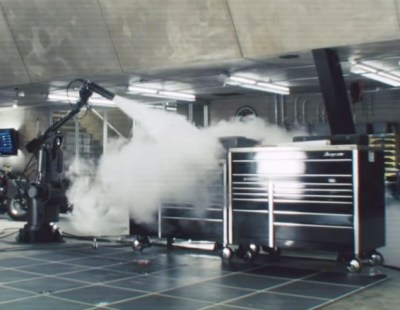 What would reality have to look like before a robot should be given legal status similar to that of a human? For that, we can look to fiction.

Tony Stark, the fictional lead character in the Iron Man movies, has a robot called Dum-E which is little more than an industrial robot arm. However, Stark interacts with it using natural language and it clearly has feelings which it demonstrates from its posture and sounds of sadness when Stark scolds it after needlessly sprays Stark using a fire extinguisher. In one movie Dum-E saves Stark’s life while making sounds of compassion. And when Stark makes Dum-E wear a dunce cap for some unexplained transgression, Dum-E appears to get even by shooting something at Stark. So while Dum-E is a robot assistant capable of responding to natural language, something we’re sure Hackaday readers would love to have in our workshops, it also has emotions and acts on its own volition.

Here’s an exercise to try to find the boundary between a tool and a robot deserving of personhood.

END_OF_DOCUMENT_TOKEN_TO_BE_REPLACED 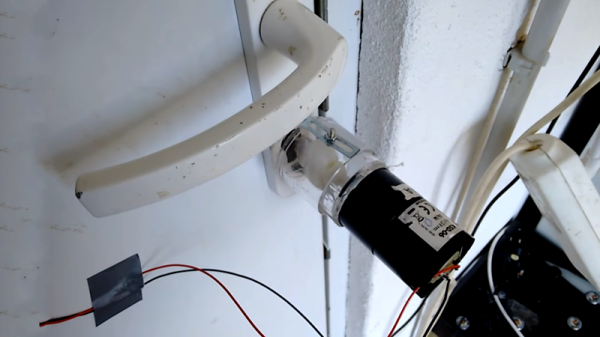 Pepper! If you’ve ever tried to grind it, you’ve probably noticed it takes a bit of elbow grease. It’s actually possible to source electric pepper mills to grind it for you, in fact. It just so happens that [MarioM66] had one to hand, and a door lock that needed automating.

Seeing as grinding pepper requires at least as much torque as turning an average key in an average lock, the electric pepper mill makes perfect sense to use as a lock actuator. This build actually uses the electric pepper mill to directly turn the key in the lock, courtesy of an adapter to couple the square output shaft to the key. The adapter was crafted out of a moldable plastic called MultiMorph. The pepper mill is being used for its high-torque motor & gearbox, which makes it absolutely perfect for this application.

The rest of the project leans heavily on the hacker’s go-to, an Arduino and some off-the-shelf gesture recognition modules. Now, it’s possible to lock and unlock the door at the press of a button or the wave of a hand! Video after the break.

It’s great to see run-of-the-mill objects hacked into useful parts for new projects. In the same vein, check out this car that lets you fistbump to unlock.

END_OF_DOCUMENT_TOKEN_TO_BE_REPLACED 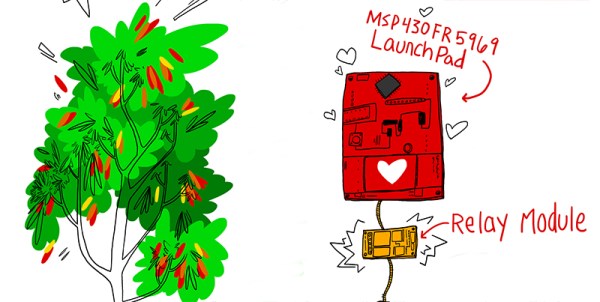 [Dave] used to grow chili peppers, but after moving to Texas he noticed his plants were drying up and dying off. This is understandable; Texas is freaking hot compared to his old home in the UK. These chilis needed a watering system, and with a pump, relay module, and an MSP430 launchpad, it was pretty easy to put together.

The core of the build is an MSP430 launchpad, a Sharp Memory LCD BoosterPack for the user interface, and a few bits and bobs for pumping water from a large soda bottle to the plant.

Before beginning his build, [Dave] took a look at commercial watering systems, but could only find huge irrigation systems for greenhouses or gardens. This was obviously overkill, but with a few parts – a six volt pump and a relay control board – [Dave] was able to make a simple system that keeps chilis watered for seven days between refilling the reservoir.