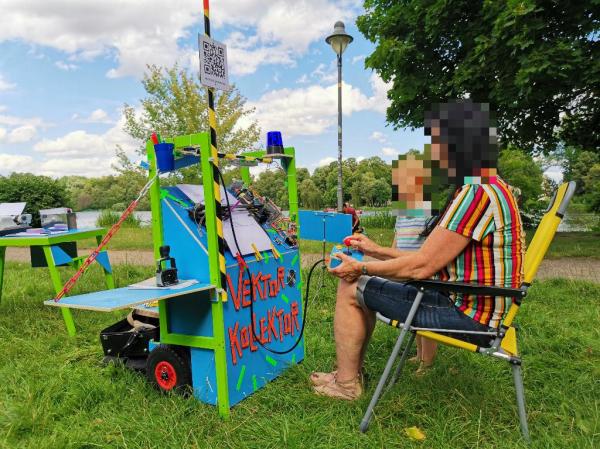 With the world opening up again, [Niklas Roy] and [Kati Hyyppä] have been busy making a public and collaborative project. Meet the Vektor Kollektor, a portable drawing machine experience, complete with a chip-tune soundtrack. It’s great to see public art meet the maker community with zero pretension and a whole lot of fun!

The build started with an HP7475A pen plotter from the 80s, one that was DOA (or was fried during initial testing). [Niklas] and [Kati] kept the mechanism but rebuilt the controls allowing for easy integration with an Arduino Nano and to be powered with a motorcycle battery.

The magic seems to be less in the junk-bin build (which is great) and more in the way this team extended the project. Using a joystick with arcade buttons as an input, they carted Vektor Kollektor to public parks and streets where they invited others to make art. The Kollekted drawings are available on a gallery website in a very cool animated form, freely available for download, on t-shirts, 3D prints, and on coffee mugs because, why not?

Some select drawings are even spray-painted on walls using a large plotter, and we really hope [Niklas Roy] and [Kati Hyyppä] share details on that build soon. Of course this comes hot on the heels of the workshop window cyborg we saw from these two hardware artists.

END_OF_DOCUMENT_TOKEN_TO_BE_REPLACED 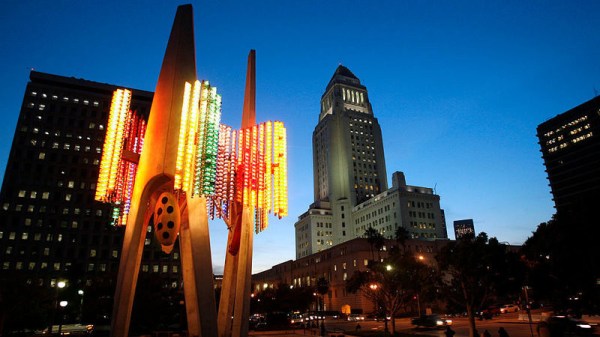 The Triforium is a public art installation in Los Angeles, weighing 60 tons and standing six stories tall. Built in 1975, it was designed to combine light and sound, all under the control of computer hardware of the era.

Sadly, it was plagued with technical problems from the start, and over the years, became an object of ridicule. However, this “polyphonoptic” masterpiece will live once again, thanks to the dedicated effort of The Triforium Project. The Triforium Project are hosting a series of free public performances on Friday nights in October and November, so if you’re in the area, be sure to check it out. The series starts tonight, so get on it!

The team were able to recover the original software that ran the sculpture’s effects — stored on 8-bit paper tape, which was not uncommon for the era. These were manually transcoded, and an emulated version of the original program has been created. In the interest of not causing further damage to the sculpture, the original lights are being left untouched. Instead, an LED system will be fitted to the sculpture to enable it to be relit.

A reflection pool at the base of the sculpture is long gone, as is the original audio source. When first built it housed a carillon — a musical instrument that uses a bell for each note in the scale. In the case of the Triforium, the carillon was made of 79 quartz bells played either manually or by the computer and amplified over a speaker system.

In 2006 that carillon was removed (replace with a digital audio source) but the gods of dumpster diving were smiling that day. It was snapped up by someone who recognized the uniqueness of the instrument and shared their story as a brief webpage. We hope that some day this will also be restored to working condition and played along with the Triforium in an exhibition. The sound of a carillon is amazing to hear in person, and we suspect the timbre of quartz bells to add an indescribable layer to the experience.

For those who can’t make it to an upcoming public performance, you can at least get a feel for the scupture through Google Street View. We do love a good public art piece here at Hackaday — whether it’s a giant head, a set of wings, or doodles in the sand.

[Thanks to JohnU for the tip!]

You think you like RGB LEDs? Columbus, OH art professor [Matthew Mohr] has more blinkenlove than you! His – convention-center-scale installation piece is an incredible 850,000 RGB LEDs wrapped around a 14-foot tall face-shaped sculpture that projection-maps participants’ faces onto the display. To capture images, there is also a purpose-built room with even illumination and a slew of Raspberry Pi cameras to take pictures of the person’s face from many angles simultaneously.

Besides looking pretty snazzy, the scale of this is just crazy. For instance, if you figure that the usual strip of 60 WS2812s can draw just about 9.6 watts full on, that scales up to 136 kW(!) for the big head. And getting the control signals right? Forgeddaboutit. Prof. [Mohr], if you’re out there, leave us some details in the comments.

(Edit: He did! And his website is back up after being DOSed. And they’re custom LEDs that are even brighter to compete with daylight in the space.)

What is it with airports and iconic LED art pieces? Does anyone really plan their stopovers to see public art? How many of you will fly through Columbus on purpose now?