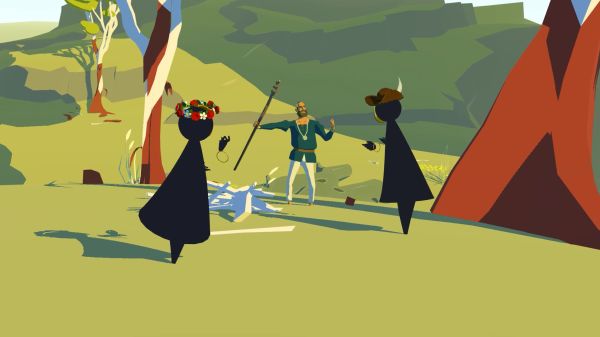 Virtual reality headsets enforce an isolated experience, cutting us off from people nearby when we put one on our head. But in recent times, when we’re not suppose to have many people nearby anyway, a curious reversal happens: VR can give us a pandemic-safe social experience. Like going to our local community theater, which is an idea [Tender Claws] has been exploring with The Under Presents.

VR hype has drastically cooled, to put it mildly. While some believe the technology is dead and buried, others believe it is merely in a long tough climb out of the Trough of Disillusionment. It is a time for innovators to work without the limelight of unrealistic expectations. What they need is a platform for experiments, evaluate feedback, and iterate. A cycle hackers know well! The Under Presents is such a platform for its corner of VR evolution.

Most VR titles are videogames of one genre or another, so newcomers to the single-player experience may decide its otherworldly exploration feels like Myst. A multi-player option is hardly novel in this day and age, but the relatively scarcity of VR headsets means this world is never going to be as crowded as World of WarCraft. This is not a bug, it is a differentiating feature. Performers occasionally step into this world, changing the experience in ways no NPC ever could. A less crowded world makes these encounters more frequent, and more personal.

Pushing this idea further, there have been scheduled shows where a small audience is led by an actor through a story. As of this writing, a run of a show inspired by Shakespeare’s Tempest is nearing its end. The experience of watching an actor adjusting and reacting to an audience used to be exclusive to an intimate theater production. But with such venues closed, it is now brought to you by VR.

How will these explorations feature in the future of the technology? It’s far too early to say, but every show moves VR storytelling a little bit forward. We hope this group or another will find their way to success and prove the naysayers wrong. But it is also possible this will all go the way of phone VR. We are usually more focused on the technical evolution of VR here, but it’s nice to know people are exploring novel applications of the technology. For one can’t exist for long without the other. [Chris Rybitski] developed this low-profile robot to help move scenery on stage. The test footage shows it to be spry and able to move hundreds of pounds of cargo. The demo shows the addition of a wooden platform about twice the length of the metal chassis with casters at each end to support the extra weight. It seems to have no problem moving around with the weight of a couple of human passengers on board.

Crafty systems for changing huge sets has long made the theater a natural breeding ground for hacks. Balanced turn tables, rails systems, and the like are common place. But we think this has a ton of potential. Right now the electronics seem convoluted, as there is an Arduino running the motors which connects to the LAN using an Ethernet shield and that Linksys wireless router.

We think he should patch directly into the serial port of the router. If he loads DD-WRT or OpenWRT he can easily make the remote control a web interface. We also wonder about the possibility of making it a line-follower that can precisely position itself automatically using patterns on the floor.

END_OF_DOCUMENT_TOKEN_TO_BE_REPLACED

The worst computer keyboard, ever

[Thomas] works in a hospital. One night, a piece of equipment went down because of a bad ribbon cable. Doctors were yelling at him to get the equipment up and running so out of frustration, he took stapler to the cable. It held up until a replacement arrived. Check out these pics: one and two.

Here’s [Alan]’s gigantic Nautilus art car with a huge mechanical iris. Just watch the video and be amazed. We won’t hazard a guess as to how much money went into all that brass and copper, but we can confirm an Arduino controls the iris. Check out the build page.

[Grissini] put up an instructable for a light box that displays [Bansky] street art. We’d go with some RGB leds and a [Keith Haring] motif, but more power to ya.

This wind machine was built by [Willaim] for his High School’s choir concert. It’s basically a concrete form tube with plastic lids taped on and a piece of pipe serving as an axle. The machine makes a wind noise with the help of some nylon pants.