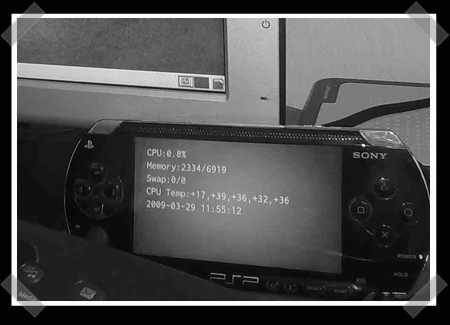 [Avi] sent in his PSP as a status monitor hack(zip). He’s using Lua on the PSP, so you have to install LuaPlayer. The computer side is written in python, so it should be cross platform. Last time we saw a psp as an extra monitor, it had more capabilities, but it was limited to Windows. You’ll find the Lua script as well as the python in the zip file. It’s a nice use for an extra psp.

Microchip’s MCP6S21/2/6/8 are programmable gain amplifiers that multiply an input voltage by a factor of 1, 2, 4, 5, 8, 10, 16, and 32. The MCP6S22/6/8 also have selectable input channels for working with different signal sources. The multiplication factor and input channel are configured through an SPI interface. This chip is useful for multiplying a small input signal, and selecting among several analog input sources. We demonstrate the six channel MCP6S26 below.

END_OF_DOCUMENT_TOKEN_TO_BE_REPLACED

[Yezzer] has posted a video of a cool little project he’s working on. He has interfaced the Arduino and the Wii Nunchuck to control some servos. He mounted a standard USB webcam on it for good measure. There isn’t a whole lot of information, but he does include a few links to code he modified for the project. The movement is quite natural looking and seems like it would be a cheap way to get some good animatronic controls started. This might actually be a great way to control a robot for the Crabfu challenge, if they ever have another one.

Update: As [dokument] points out in the comments below, it looks like we’ve seen a set up that could be almost identical in the past.