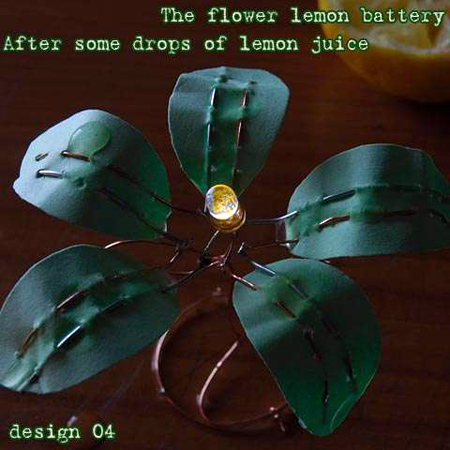 [Madaeon] pointed us toward this entry for the Instructables Epilog challenge. While this may not be extremely complex, or have as many wires as our typical post, it is a fantastic example of thinking outside the box. How many lemon batteries have we seen? A lot. This one stands out as being more elegantly displayed and functional at the same time. In its final form, you sprinkle lemon juice on it’s petals and it lights up. If you ever find yourself in the position of teaching someone about electronics, remember this project. Sometimes aesthetics can make a dull simple project take on a life of its own.

This speech controlled garbage can was sent in via the tip line by [Amnon]. The garbage can will come to you following a black line and stopping when it sees a cross in the line, then waits for another voice command. It can then return to where it belongs or go outside following the line. The system is based on a microchip PIC 18F4431 and uses three 18 volts cordless drill motors and their batteries as the power source. “In the near future the line sensors will be replaced with UV line sensors and the black line will be replaced with clear UV color.”

When you call the system “Pach Zevel ” (garbage can in Hebrew) the system go to standby and the LED’s light up.  After the previous stage if you say “ELAY” (to me in Hebrew) it will drive on the black line till the first crossing.
This adds new meaning to taking the trash out.

[Ben Heck] posted this writeup about getting S-Video/composite out of an Atari 2600. This is actually the hack of [Longhorn Engineer], who showed it to [Ben] at a recent event. If any of you have tried to play these classics on a modern TV you may have found it to be quite difficult. If you manage to get it physically connected, through adapters and such, you may still have video issues. This alleviates that issue completely. After you solder this in, your Atari has native composite/S-video. As you can see in the video after the break, it seems to work pretty well.

END_OF_DOCUMENT_TOKEN_TO_BE_REPLACED

The Phoenix is a very impressive hexapod robot platform. It has 18 servos which gives each leg 3 degrees of freedom and a BasicAtom Pro 28 for the brains. Interestingly, the design started as a personal project of a forum member on the Lynxmotion forums. It turned out so well, it has become an actual product. We’ve seen videos of these before and they always have some pretty fluid and organic seeming motion. They seem almost alive in this configuration. The only thing that might make them scarier would be to add Lou Vega’s decapitated head, well maybe that plus some really nice face tracking. In the video above, you can see where someone paired one up with a Wiimote for a pretty intuitive control scheme. Yeah, we realize the video is nearly a year old, how did we miss this one? You can see a video of it walking around after the break, and another controlled by a ps2 controller.