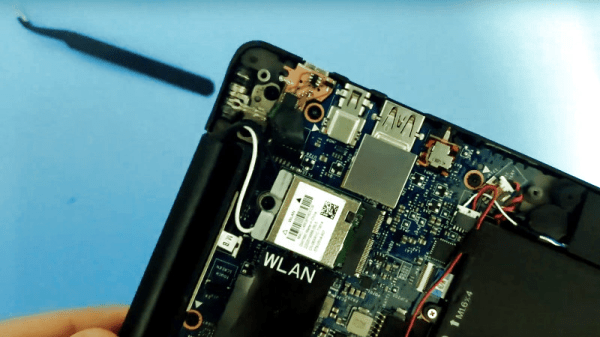 With USB-PD slowly making wall wart power supplies obsolete and becoming the do-it-all standard for DC power, it’s a popular conversion to slap an off-the-shelf USB-PD module in place of the barrel jack in a laptop. Not when it comes to [jakobnator] though, who fitted his Dell with an upgrade lovingly and expertly crafted for both electrical and mechanical perfection.

The video that you can find below the break is a long and detailed one, but in that detail lies touches that set the conversion apart from the norm. We’re treated to a full-run-down of USB-PD module design and chip programming, and then the mechanics of the 1-wire chip through which the Dell ties itself in with only Dell power supplies. Programming this chip in particular is something of a challenge.

It’s the mechanical design that sets this one apart. He started with an odd-shaped space that had contained the barrel jack socket and a ferrite choke, and designed a PCB to fit it exactly. 3D-printing a model to check for fit is attention to detail at the stratospheric level. The result is a fit that looks almost as though it was part of the original manufacture, and which should keep the laptop useful for years to come.

This may be the most elegant USB-C laptop conversion we’ve seen, but it’s not the only one.

END_OF_DOCUMENT_TOKEN_TO_BE_REPLACED

The folks at Swindon Makerspace took possession of a new space a few months ago after a long time in temporary accommodation. They’ve made impressive progress making it their own, and are the envy of their neighbours.

A small part of the new space is a temperature logger, and it’s one whose construction they’ve detailed on their website. It’s a simple piece of hardware based around a Dallas DS18B20 1-wire temperature sensor and an ESP8266 module, powered by 3 AA batteries and passing its data to data.sparkfun.com. The PCB was created using the space’s CNC router, and the surface-mount components were hand-soldered. The whole thing is dwarfed by its battery box, and will eventually be housed in its own 3D printed case. Sadly they’ve not posted the files, though it’s a simple enough circuit that’s widely used, it looks similar to this one with the addition of a voltage regulator.

The device itself isn’t really the point here though, instead it serves here to highlight the role of a typical small hackspace in bringing simple custom electronic and other prototyping services to the grass roots of our community. Large city hackspaces with hundreds of members will have had the resources to create the space program of a small country for years, but makers in provincial towns like Swindon – even with their strong engineering heritage – have faced an uphill struggle to accumulate the members and resources to get under way.

So to the wider world it’s a simple temperature logger but it really represents more than that — another town now has a thriving and sustainable makerspace. Could your town do the same?

If you’ve never used a Dallas 1-wire temperature sensor like the one the Swindon folks have in their logger, we suggest you read our primer on the parts and their protocol.

The 1-Wire protocol is usually found in temperature sensors, but you’ll also find it in chips ranging from load sensors, a battery sensor and LED driver that is oddly yet officially called a ‘gas gauge’, and iButtons. It’s a protocol that has its niche, and there are a few interesting application notes for implementing the 1-wire protocol with a UART. Application notes are best practices, but [rawe] has figured out an even easier way to do this.

The standard way of reading 1-Wire sensors with a UART is to plop a pair of transistors and resistors on the Tx and Rx lines of the UART and connect them to the… one… wire on the 1-Wire device. [rawe]’s simplification of this is to get rid of the transistors and just plop a single 1N4148 diode in there.

This would of course be useless without the software to communicate with 1-Wire devices, and [rawe] has you covered there, too. There’s a small little command line tool that will talk to the usual 1-Wire temperature sensors. Both the circuit and the tool work with the most common USB to UART adapters. 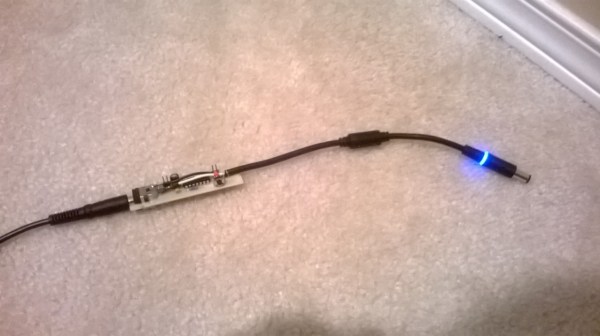 If you’ve ever had a laptop charger die, you know that they can be expensive to replace. Many laptops require you to use a ‘genuine’ charger, and refuse to boot when a knock off model is used. Genuine chargers communicate with the laptop and give information such as the power, current, and voltage ratings of the device. While this is a good safety measure, ensuring that a compatible charger is used, it also allows the manufacturers to increase the price of their chargers.

[Xuan] built a device that spoofs this identification information for Dell chargers. In the four-part series (1, 2, 3, 4), the details of reverse engineering the communications and building the spoofer are covered.

Dell uses the 1-Wire protocol to communicate with the charger, and [Xuan] sniffed the communication using a MSP430. After reading the data and verifying the CRC, it could be examined to find the fields that specify power, voltage, and current.

Next, a custom PCB was made with two Dell DC jacks and an MSP430. This passes power through the board, but uses the MSP430 to send fake data to the computer. The demo shows off a 90 W adapter pretending to run at 65 W. With this working, you could power the laptop from any supply that can meet the requirements for current and voltage. 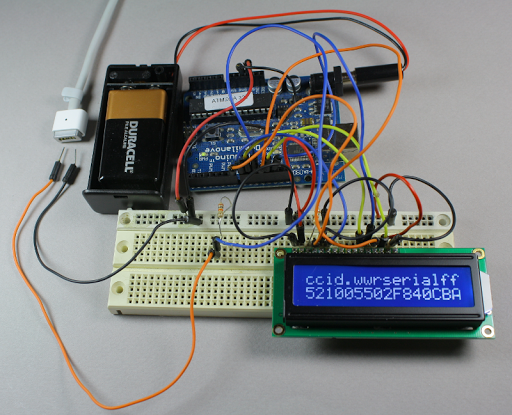 [Ken Shirriff] was interested in how the Apple MagSafe works. Specifically he wanted to know what controlled the LED on the connector itself so he tore one open to see what is inside. There’s a chip present and he didn’t waste time figuring out how the MagSafe communication protocol works.

The DS2413 chip he found on the MagSafe’s tiny little PCB has just six pins. Two of these control a pair of LEDs, which give the indicator its color range.  Another pin is used for 1-wire communications. When polled the charger will return a 64-bit identification number that includes a variety of information. [Ken] looks into what data is offered from several different models of charger by using the Arduino setup above. But the results are not entirely straight-forward as he discusses in his article. The 1-wire protocol is also used to switch the LEDs. This process is the responsibility of the computer being charged, but [Ken] shows how the colors can be cycled using an Arduino (with a couple of 9-volts as a source instead of a connection to mains).