This is the fourth generation MIDIbox sequencer which has a features set that’s several screens long. We’ve embedded the teaser video of this 16-track marvel after the break. You can use it via a traditional MIDI connection or with USB. Standalone Ethernet features are also in the works. It’s fully documented and you can etch your own PCB if you’re brave but it might be easier to get in on the group PCB buy if you just have to have one of these. There’s no all-in-one kit, but that will just make the taste of success sweeter once your soldering iron cools down.

END_OF_DOCUMENT_TOKEN_TO_BE_REPLACED

Spice up your next house party with this diy foam machine. [Stephen Martin] posted his PDF plans for version 1 and version 2 of the device. It seems the deciding factor on the machine is the type of fabric screen used to create the suds from a bubble bath liquid. This is the reason he’s got two versions. They share a lot of the same components (especially the expensive ones) but the first version is easy to swap out different fabrics and the second is a more permanent installation. In the end, we’re looking at a sump pump feeding foam to a fabric net that is attached to a blower. This will be a nice addition to that fog machine you built last fall. 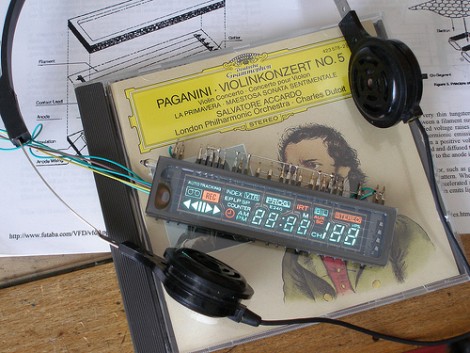 [Alessandro Lambardi] had some vacuum flourescent displays that he pulled from junked VCRs. His latest project is an experiment to use one of the VFDs as a headphone amplifier (Wayback Machine Cache). This means he’s trying to use them as vacuum triode amplifiers, aka vacuum tubes. He did get it to work but as he suspected, the output is fairly low power. It may be possible to use this setup as a preamp and build an actual tube amp to use along with it.

Update: Thanks to [Fallen] for mentioning that we’ve covered this concept in the past.

Android, on the iPhone? We’ve covered iPhone Linux before… and if you look back, we mentioned the possibility of porting Android to the iPhone (even way back in 2008!). Well we are proud to announce that The Future is Now! The details are a little slim so far, but the iPhone is seen running a stock Android 1.6 install (Donut), and has support for Wifi, GSM networks, and even uses openiBoot to dual boot to the regular iPhone OS if you aren’t particularly committed. Right now the developers are considering it an Alpha version, and have provided all you need to perform this particular brand of Cult of Apple heresy. One catch though, the developers say that they only have it working on the 2G models, so sorry all you 3G(S) folks (for now). Dont get too down, and keep an eye open, something like this is bound to attract new talent to push the movement.

Anyone out there with a 2G and some free time? We would love to see some users showing off Hackaday on their hacked up iPhone!

WaitingForFriday’s [Simon Inns] is quite possibly the USB interface and PIC master. This week he let us know about his VU-meter repurposed as a computer performance monitor using a PIC18F2550 and his open source USB Generic HID communication class. With PWM the meter’s needles and RGB LED can be accurately set and even dampened for CPU usage, network usage, HDD utilization, and even memory usage. Oddly enough, in his software we didn’t find the ability to use the device as a VU-meter – go figure.