Those of us with 3D printers have had two major choices when selecting a material to print with – ABS, a very hard plastic, and PLA, a more brittle plastic with a lower melting point. [Alex] and [Luke] have been experimenting with printing polycarbonate and creating clear crystalline objects on a standard 3D printer.

The first foray into printing polycarbonate didn’t go so well for [Luke]. Objects came out looking very milky and there was a bit of popping during filament extrusion. The guys solved this problem by putting the polycarbonate filament in a food dehydrator overnight to get rid of the moisture. Polycarbonate has a higher melting temperature than other plastics – around 260 degrees Celsius – which can cause some problems with Teflon insulators in the hot ends of extruders. The guys didn’t have any problems with fumes, though.

If you’ve ever wanted to print something clear, it looks like it’s now possible. Check out the video after the break to see a Makerbot Thing-O-Matic printing with clear polycarbonate.

END_OF_DOCUMENT_TOKEN_TO_BE_REPLACED END_OF_DOCUMENT_TOKEN_TO_BE_REPLACED

FPGAs are the bee’s knees. Instead of programming a chip by telling it what to do, FPGAs allow you to tell a chip what to be. Like everything though, a new skill set is needed to fully exploit the power of FPGAs. [Mike Field] decided to give back to the internet community at large and put up a crash course in FPGA design.

Right now, [Mike] has a couple of modules up that include subjects like binary math, busses, counting, and of course setting up the FPGA hardware. The recommended hardware is the Papilio One, although the Digilent Nexys2 is what [Mike] has been using so far.

We’ve seen a ton of awesome stuff that uses FPGAs, like the emulated Mac Plus, breaking HDCP, and an Ocarina of Time. [Mike]’s tutorials look like a great starting point for some FPGA work. [Mike] is also looking for some feedback on his tutorials, so if you’ve got an idea of what he should cover be sure to drop him a line. For camera fanatics the acquisition of an old camera is a thrilling event. But if you’re going to collect them, you’d better have some repair skills so that you can also use them. [Fernando’s] latest find was this Minox 35mm camera. The aperture needed cleaning, and after reassembling the unit he realized the he had not marked the focus ring when taking it apart. This is not a reflex camera, so you can’t look in the view finder to adjust focus. He came up with his own method to get the focus ring calibrated.

The focal point needs to focus on the film. He simulated this plane using some magic tape, which removes easily without leaving a residue. When the shutter is open, you can see the image projected on this translucent surface. He then set up the camera with the lens 90 cm from a bright light bulb. By adjusting the focus to create a sharp image on the temporary screen, he knows the focus is calibrated, and can reset the focus ring to the 0.9m mark.

Need some help developing that exposed film? You could always give the coffee and vitamin C hack a try. Admittedly this post is flirting with flamebait, but we think the concept of using a spring clamp as an iPhone tripod mount has a lot of hacking potential. Hear us out, and if we havn’t made our case you can rant about it in the comments.

[Joe] wanted an easy way to mount his iPhone on a standard tripod. We’ve seen some creative solutions for this, like using Sugru to make a removable bracket. But he went a different route, using a cheap spring clamp to grip the phone body. These plastic clamps are like over-powered clothespins, and use a screw as the pivot point. [Joe] replaced the stock screw with a longer one, then used a coupling nut which will attach to the tripod. A bit of foam on the pads of the clamp protect your device from the plastic teeth.

It’s a fine solution (if you don’t mind putting that pressure on your smart phone). But we think this would be a great way to build your own heavy-duty third hand. It would be right at home with this modular solder platform. See [Joe’s] how-to video embedded after the break.

END_OF_DOCUMENT_TOKEN_TO_BE_REPLACED 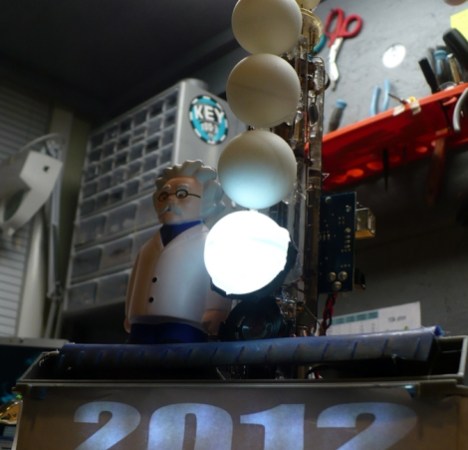