Minecraft fanatics keep finding impressive ways to bring 8-bit components into the real world, and [Chris Tompson’s] Redstone Lamp Replica is no exception. [Chris] wanted to extend his connection to the game world by not only replicating this block, but also by controlling its light-up effect when an in-game cube is lit.

The lamp is a product of the gang at Hive76, who worked together to develop a quick prototype using the Minecraft Python client pyCraft, an Arduino, a transistor and a temporary papercraft lamp mockup. Hive76 member [Kyle] pitched in to write the plugin for pyCraft, which listens for an on/off message and sets one of the RasPi’s GPIO pins accordingly. The hardware for the actual lamp was designed to smooth out the 8-bit quality into something a bit more precise. The result are laser-cut pieces of MDF with a zebra wood veneer laminated on top. The interior was finished off with amber cathedral glass and then the cube’s sides were glued together. The RasPi, PCB and LEDs fit inside, all snugly affixed together.

Swing over to the Hive76 project page for more details and links to the plugin, and see the video demonstration below. For another Minecraft-inspired real-life project, check out [Bill’s] take on the BatBox.

END_OF_DOCUMENT_TOKEN_TO_BE_REPLACED

Have you ever heard of the game Johann Sebastian Joust? We haven’t either, but [Juerd] has come up with an open source version of it called Opentilt, and we have to admit — it looks like a lot of fun!

Johann Sebastian Joust uses motion controllers for a game that can be played indoors or out, without a screen. Everyone gets a motion controller, and the object of the game is to make everyone else move their controller too fast. It even has a music mode that lets you move your controller relative to the speed of the music! Anyway, it had an extremely successful kickstarter, and it has been debuted at many events around the world — but it’s simply not available to the general public just yet. [Juerd] couldn’t wait that long so he decided to make a similar open source version of it, with cheap off-the-shelf parts. The biggest difference is this one doesn’t have the music.

The build is quite simple and inexpensive. You’re looking at some PVC pipe, an Arduino Nano, a RGB LED, a 2.4GHz radio module, an accelerometer, a pingpong ball, a battery pack, and various other resistors and wire. Nothing to it really! All the source code, and instructions are available off of [Juerd’s] site, and he’s done a great job explaining everything, down to fixing a common problem that some people have on Arduino Nanos!

Stick around after the break to see how the original Johann Sebastian Joust game works!

END_OF_DOCUMENT_TOKEN_TO_BE_REPLACED 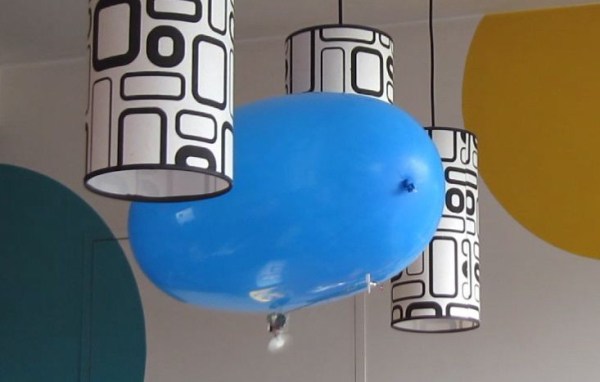 Here’s a great little RC hack you can do with the kids this weekend — make your very own RC Blimp!

First you’ll have to hack apart one of those little 1/64 scale RC cars you can get for a few dollars, and then all you need are a few household supplies, and a helium filled balloon. [Masynmachien] says the total cost of this project can be as little as $13 — depending on where you get your supplies.

So how does it work? Well, an 11″ helium filled party balloon can lift about 10g quite easily — if you strip away the body and chassis of one those RC cars you’ll be well under that weight. The RC cars typically have one small DC motor and a steering actuator, but [Masynmachien] found you can actually connect a second DC motor to the leads for the actuator and it works just fine. Doing this you can create a main prop to drive the blimp, and a secondary tail rotor to steer it. The Instructable uses mostly recycled components, but we’re sure if you had more time you could design and build an even nicer one. When the blimp is properly trimmed it sinks slowly in the air, so the main prop is responsible for keeping it at a certain altitude — this takes a bit of getting used to but it’s an easy way to get around steering in all directions.

Looking for a more advanced project using these little cars? How about building a RC plane with them! Or if you’re feeling ambitious, you can also control them using your computer! Stick around after the break to see it in action!

END_OF_DOCUMENT_TOKEN_TO_BE_REPLACED If you’re going to send some hardware up to 100,000 feet, where atmospheric pressure is 1% of what we enjoy on the surface and temperatures swing down to where Fahrenheit and Celsius don’t matter anymore, you might want to do a bit of testing to make sure everything works before launch. With a few bits of PVC, though, that’s a piece of cake.

There were several environmental conditions to take into consideration; the near vacuum experienced by high altitude balloons would be replicated by a refrigerator compressor, the increased solar flux is simulated by a light bulb, and the cold temperatures provided by a chunk of dry ice.

For a proper high altitude, low temperature environmental chamber the test payload should be cooled down via radiation with tubes filled with liquid nitrogen embedded in the walls. This is the NASA way of doing things, but for the budget of $200, [arko]’s chamber simulates a high altitude environment just fine.

END_OF_DOCUMENT_TOKEN_TO_BE_REPLACED

In recent years, quadrotors have exploded in popularity. They’ve become cheap, durable, and can do some really impressive things, but are they the most efficient design? The University of Queensland doesn’t think so.

Helicopters are still much more efficient and powerful due to their one big rotor, and with the swashplate mechanism, perhaps even more maneuverable — after all did you see our recent post on collective pitch thrust vectoring? And that was a plane! A few quick searches of helicopter tricks and we think you’ll agree.

The new design, which is tentatively called the Y4, or maybe a “Triquad” is still a quadrotor, but it’s been jumbled up a bit, taking the best of both worlds. It has a main prop with a swashplate mechanism, and three smaller rotors fixed at 45 degree angles, that provide the counter torque — It’s kind of like a helicopter with three tails.

Regarding efficiency, the researchers expect this design could achieve an overall increase of about 25% in performance, compared to that of a standard quadrotor. So, they decided to test it and built a quad and a Y4 as similar as possible — the same size, mass, batteries, arms, and controller board. The results? The Y4 had an increased run time of 15%! They think the design could very well make the 25% mark, because in this test study, the Y4 was designed to meet the specifications of the quad, whereas a more refined Y4 without those limitations could perhaps perform even better.

Unfortunately there’s no video we can find, but if you stick around after the break we have a great diagram of how (and why) this design works!

END_OF_DOCUMENT_TOKEN_TO_BE_REPLACED Here’s a new chip from FTDI which brings a nice little feature to the USB-to-serial converter family: charging detection. That means that it is capable of detecting when a battery charger is connected. What does that actually mean? The top of the datasheet gives you the short version, but let’s look at the investigation [Baoshi] undertook to test the full extent of this particular feature. We agree with him that the listed capability leaves those in the know with a lot of questions:

Obviously the chip will be able to tell when a charger is connected, alerting the device when it’s time to start lapping up the extra milliamps. But what type of chargers will actually trigger the detection circuit? After rigging up the test circuit shown above he ran through several scenarios: connected directly to the PC USB port, via externally powered and non-powered USB hubs, and with multiple wall wart chargers. Full results of the tests are included in the post linked above.