There aren’t many Hackaday Prize entries playing around in RF, save for the handful of projects using off the shelf radio modules. That’s a little surprising to us, considering radio is one of the domains where garage-based tinkerers have always been very active. [Luke] is bucking the trend with a FM continuous wave radar, to be used in experiments with autonomous aircraft, altitude finding, and synthetic aperture radar imaging.

[Luke]’s radar operates around 5.8-6 GHz, and is supposed to be an introduction to microwave electronics. It’s an extremely modular system built around a few VCOs, mixers, and amplifiers from Hittite, all connected with coax.

So far, [Luke] has all his modules put together, a great pair of cans for the antennas, everything confirmed as working on his scope, and a lot of commits to his git repo.

You can check out [Luke]’s demo video is available below.

END_OF_DOCUMENT_TOKEN_TO_BE_REPLACED

The best projects have a great story behind them, and the Apollo from Carbon Origins is no exception. A few years ago, the people at Carbon Origins were in school, working on a high power rocketry project.

Rocketry, of course, requires a ton of sensors in a very small and light package. The team built the precursor to Apollo, a board with a 9-axis IMU, GPS, temperature, pressure, humidity, light (UV and IR) sensors, WiFi, Bluetooth, SD card logging, a microphone, an OLED, and a trackball. This board understandably turned out to be really cool, and now it’s become the main focus of Carbon Origins.

There are more than a few ways to put together an ARM board with a bunch of sensors, and the Apollo is extremely well designed; all the LEDs are on PWM pins, as they should be, and there was a significant amount of time spent with thermal design. See that plated edge on the board? That’s for keeping the sensors cool.

The Apollo will eventually make its way to one of the crowdfunding sites, but we have no idea when that will happen. Carbon Origins is presenting at CES at the beginning of the year, so it’ll probably hit the Internet sometime around the beginning of next year. The retail price is expected to be somewhere around $200 – a little expensive, but not for what you’re getting. 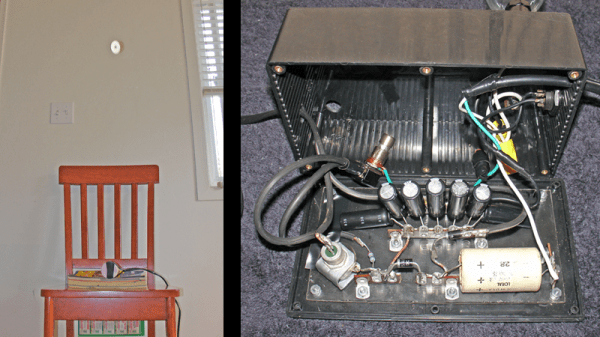 Some folks believe that exposure to electromagnetic pulses helps the human body heal itself (one portion of the [Bob Beck] protocol). [Steffan] is one of those folks and was interested in EMP generation but wasn’t crazy about the several-hundred dollar price tag for professional units. As any determined DIYer would do, he set off to make his own.

This whole thing works by straight-out-of-the-wall 110v AC running through a couple 60 watt light bulbs before moving through a rudimentary rectifier circuit. The DC output from the rectifier charges five 130uF camera flash capacitors. An inductor coil is responsible for generating the EMP and is only separated from the capacitors by a single normally-open momentary switch. Although it is possible to wrap your own coil, [Steffan] decided to use an off the shelf 2.5mH unit normally used for speaker system crossovers. Once the momentary switch is pressed, the energy in the capacitors is discharged through the inductor coil and the EMP is created. To demonstrate that the pulser does indeed work, a metal washer was placed on the inductor coil and the unit fired resulting in the washer being thrown into the air.

[Stephan] did deviate from the some of the online designs he had researched, using 7 capacitors instead of the recommended 5. The result was a firecracker-like discharge sound and melting of the 14 gauge wire. Well, back to 5 caps. 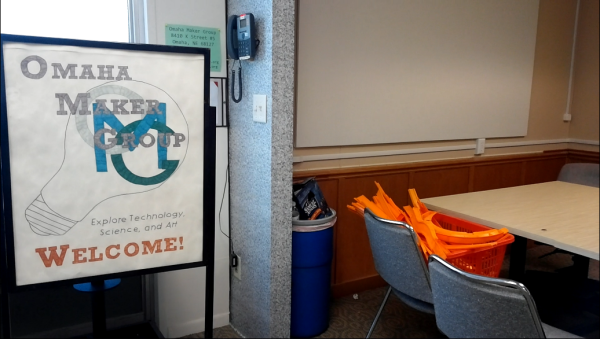 END_OF_DOCUMENT_TOKEN_TO_BE_REPLACED

A few years ago, every booth at a Maker Faire had a 3D printer. It didn’t matter if 3D printing was only tangental to the business, or even if the printer worked. 3D printers have finally jumped the shark, and there’s going to be an awesome t-shirt to reflect this fact. This year there weren’t many 3D printers, leaving us asking ourselves what the new hotness is.

Pick and place machines. We couldn’t find many at the faire, and only Carbide Labs’ Pick and Paste machine was working on picking up small resistors and LEDs the entire faire. Carbide’s Pick and Paste machine is exactly what you would expect in a pick and place machine: it picks up components out of tapes and wells, orients them correctly, and plops them down on a board.

The killer feature for the Pick and Paste is its modular design. The toolhead is expandable, allowing anyone to add a second vacuum nozzle to double the rate parts are placed, or a solder paste dispenser. The guys didn’t have the paste dispenser working for the fair (leaded solder and kids don’t mix), but this machine is effectively a combination pick and place machine and solder paste dispenser, something that’s usually two machines on an assembly line.

Also at the faire was Tempo Automation. They’re in a pseudo-stealth mode right now, waiting until everything works perfectly until bringing their machine to the masses. It is, however, exceptionally fast and about a third of the price of a similar machine.

The only other pick and place machine at the faire was the Firepick Delta, one of the more popular projects on hackaday.io and one of fifty finalists for the Hackaday Prize. Unfortunately, the FirePick Delta was broken in shipping, and although [Neil] was sitting right next to the 3D printing guys, it would have taken all weekend to repair the machine. 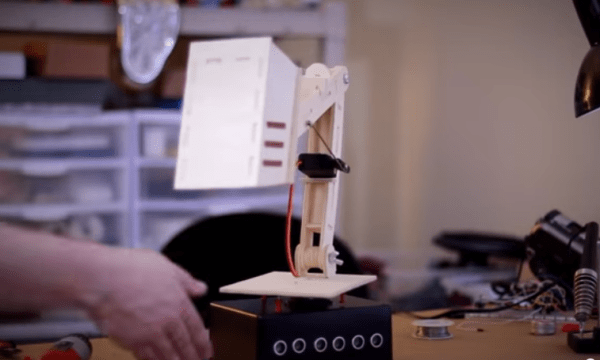