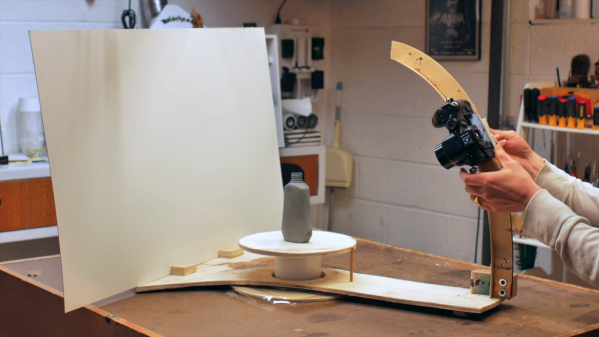 If you don’t have access to a 3D scanner, you can get a lot done with photogrammetry. Basically, you take a bunch of pictures of an object from different angles, and then stitch them together with software to create a 3D model. For best results, you need consistent, diffuse lighting, an unchanging background, and a steady camera.

Industrial designer [Eric Strebel] recently made an Intro to Photogrammetry video wherein he circled an object taking photos with his bare hands. One commenter suggested a different method: build a donut-shaped turntable that circles the object, which sits on a stationary platform. Attach the camera to the donut, counterbalance the weight, and Bob’s your proverbial uncle. [Eric] thought it was a brilliant idea (because it is), and he built a proof of concept. This is that video.

[Eric] can move the camera up and down the arc of the boom to get all the Z-positions he wants. The platform has a mark every 10° and there’s a pointer in the platform to line them up against for consistent camera positioning. He was pleasantly surprised by the results, which we agree are outstanding.

We always learn a lot from [Eric]’s videos, and this one’s no exception. Case in point: he makes a cardboard mock-up by laying out the pieces, and uses that to make a pattern for the recycled plywood and melamine version. In the photogrammetry video, he covers spray paint techniques to make objects reflect as little light as possible so the details don’t get lost.

If you prefer to rotate your objects, get an Arduino out and automate the spin.

END_OF_DOCUMENT_TOKEN_TO_BE_REPLACED 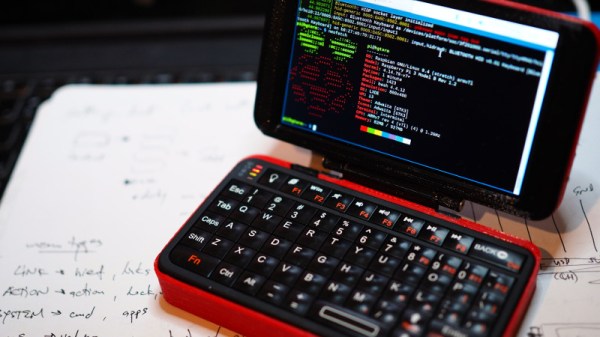 In the seven years since the Raspberry Pi was first launched to an expectant audience we have seen many laptops featuring the fruit-themed single board computers. Some of them have been pretty jaw-dropping in their quality, so for a new one to make us stop and gape it needs to be something really special. On cue, here comes [Igor Brkić] with one of the neatest efforts we’ve seen, a high quality Pi laptop that’s smaller in frontal area than many smartphones.

At its heart is a Pimoroni Hyperpixel touchscreen HAT, and a Pi sitting behind it that has been stripped of all bulky connectors to reduce its height. The keyboard is a mini Bluetooth affair, and power comes courtesy of a deconstructed USB power bank with a lithium-ion pouch cell. The whole is contained within a neatly designed 3D-printed clamshell enclosure, making for a tiny and very neat laptop. We want one, and now you probably do too. (We wouldn’t say “no” to some level shifters and a GPIO port…)

If we had to pick another high-quality Pi laptop to compare this one with, it would have to be this one with a Psion-inspired hinge. 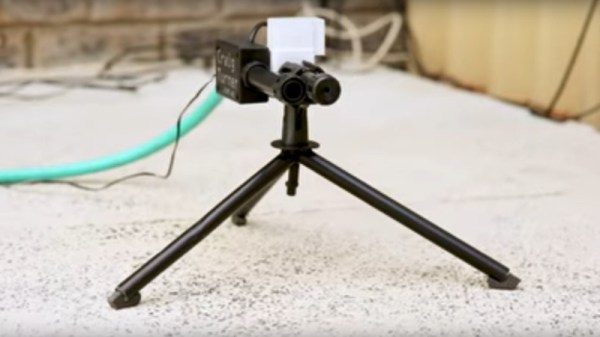 Some of us here at Hackaday are cat lovers, but we also understand that a plethora of unwanted cats using a suburban back garden can be bothersome, and a few years ago we featured a project from Aussie YouTuber [Craig Turner], in which he created a motion-detecting water spray for use as a relatively harmless cat repellent. Now he’s back with an updated version which is a little slicker and easier to make.

At its heart is the same PIR-turns-on-water operation, but this time there is a solenoid valve and purpose-built nozzle instead of a car central locking actuator and a lawn sprayer. Doing the electronic work is an off-the-shelf PIR module, so there is no  longer any need to hack a security PIR detector. Add in some pipe sections and PTFE tape with a bit of hot glue, and the result is a far more professional and streamlined device. The video gives a full run-down on construction, though we notice he neglected to emphasise the polarity of his protection diode so keep an eye out if you follow his example.

So if the thought of a continuous supply of free feline company courtesy of your neighbours is not for you then now you are equipped to send them packing. The latest video incarnation of the project is below the break, but if you are in search of the original then you can go back to our coverage at the time.